Weightless is about well-being, not weight; about fostering body image, regardless of your size. It’s about exposing women’s magazines, other mediums and so-called experts, when they’re touting unhealthy tips and promoting restrictive standards.

The goal of Weightless is to help women develop a better body image and work toward accepting themselves as they are, while being healthy and happy (fad diets and skinny-mini standards prohibited!); and to become sharp consumers, who can pick apart a commercial or magazine article and know which advice is helpful or harmful.

In one of the site’s first posts, writer Margarita Tartakovsky identifies seven signs you may be suffering from a poor body image and suggestions to help readers be less self-critical. In the aptly titled “Minding Women’s Magazines: Asinine Advice,” Tartakovsky pulls out “tips” from magazines including Women’s Health, Self and Cosmopolitan and deconstructs the messages. To wit:

3. “Your fear: ‘I overeat at parties.’ Celebratory spreads make it easy to stuff yourself. But obsessing over every bit will ruin your night. ‘Ask yourself, How do I want to feel tomorrow? Bloated and disappointed or proud and healthy?’ Beck says. Strap your watch on the wrong wrist as a visual reminder of your goal; you’ll automatically eat less.” {Self, November 2009, pg. 87}

As I was reading the first few phrases, I found myself nodding in agreement — especially the part where we shouldn’t be obsessing about food — up until the value judgments rolled in. So what if I do enjoy one too many appetizers at a holiday party, instead of saying to myself how delicious the food was and acknowledging that I did overeat and will try to avoid that next time, I should feel like a bloated, disappointed failure. Thanks Self!

Since women are often made to feel like they’re overeating anytime they’re enjoying their food, I wish the response first questioned why we think we’ve crossed the line. For some, overeating at a party might mean consuming more than one tiny appetizer.

But though it sidesteps this question, I appreciate that a popular and respected website on mental health considers body image a topic worthy of its own blog. And I’m glad  Weightless launched in time to confront  the holiday weight smack-down. 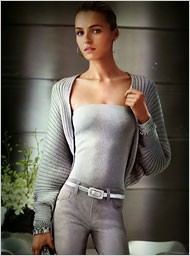 Plus: Last month, Randy Cohen, who writes The Ethicist column for The New York Times, asked whether ads using electronically altered images of models — making them ridiculously skinny — should  be banned or come with a warning label. The model pictured here was digitally altered for a Ralph Lauren window display in Sydney, Australia.

Speaking of Australia, a federal government advisory group comprised of educators, psychologists and media folks have put together a national strategy on body image (pdf).

One of the group’s members, Danielle Miller, writes about the recommendations, including the proposed educational curriculum and voluntary code of conduct for advertisers and fashion companies. In this frank discussion, Miller acknowledges the shortcomings of the proposal and the difficulties that lie ahead.