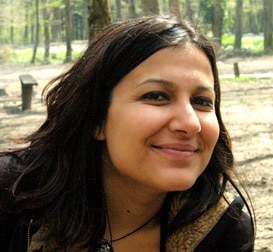 I’m a 29-year-old feminist from Turkey. It is hard to be a feminist in Turkey, as I know it is in many countries.

When you state that you’re a feminist, people judge your appearance and question whether you hate men. They speculate about your sexuality, asking if you are a lesbian and why feminists are so “offensive.” Pity we have to encounter such prejudices.

In Turkey, women who call themselves feminist have increased in number in the past few decades, but they are still a very small group. Of course, there are many women who, though they fear being associated with the term and the clichéd prejudices, are still interested in feminist issues.

Many women go about their daily routines giving little thought to obtaining information about their rights, health and body. At the same time, they have difficulty finding sources of information if the need arises. So feminism remains not well understood.

Also, there are some separation points in the women’s movement, including ethnicity, religion and sexual identity, that make moving forward with common goals more difficult. Groups tend to focus on specific concerns, such as legal regulations and violence against women, instead of women’s health and broader political issues. In addition, women’s issues are pushed to the side in Turkey’s political institutions.

I got involved in the women’s health movement when I started working at Mavi Kalem as a volunteer. We were organizing health programs and implementing house visits. At the end, my teammates mentioned the “Our Bodies, Ourselves” book and the possibility of starting that project. It was a brilliant experience to be part of such a project as a health trainer, and with OBOS I started specializing on women’s health rights.

Being a part of this project, I learned a lot — especially about myself, my body, feminism and women’s solidarity. My commitment to finding solutions to problems affecting women in Turkey increased when working on “Bedenlerimiz Biziz,” the Turkish version of “Our Bodies, Ourselves.”

Now we are developing educational modules on women’s health based on “Bedenlerimiz Biziz,” and we are working on women’s health and women’s rights education. In these times, coming together with women are the moments I enjoy in life. The experiences give me energy and hope.

We expect to complete the “Our Bodies, Ourselves” project by the end of 2011. When “Bedenlerimiz Biziz” emerges, we believe many women will take steps to improve their lives. We also believe that this book’s arrival will create an opportunity for reform around the politics of women’s health and the feminist movement in Turkey.

A native of Çanakkale in Turkey, Gamze Karadağ is the general coordinator of Mavi Kalem. She organizes its volunteer and field teams, conducts health trainings for women in local communities, factories, and shelters, and contributes to its monthly women’s health magazine, Zuhre.