Menu
Home > Our Impact > Our Bodies, Our Blog > Educate Congress – Highlights from Our Bodies Ourselves at the National Press Club 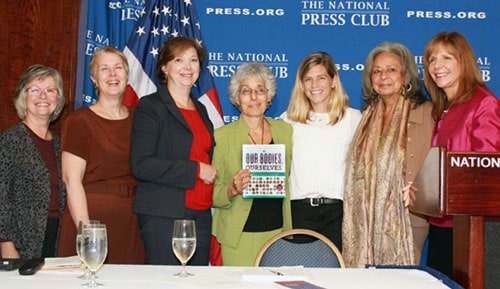 Our Bodies Ourselves kicked off the Educate Congress campaign Monday at the National Press Club, joined by some of the smartest and most influential experts on women’s health. The campaign aims to deliver “Our Bodies, Ourselves” to every member of the U.S. House and Senate.

Judy Norsigian, OBOS founder and executive director, spoke about the clear need to provide Congress with accurate, evidence-based information, particularly in the wake of some outlandish and indeed dangerous comments about women’s bodies.

Cindy Pearson, executive director of the National Women’s Health Network, said, “What seems to be going on somewhat right now is public figures’ willingness to make statements of fact that are so badly wrong.”

Other speakers included Diana Zuckerman, president of the National Research Center for Women & Families; Erin Thornton, executive director of Every Mother Counts; Vivian Pinn, former director (retired) of the Office of Research on Women’s Health and Marion McCartney, CNM, a pioneer nurse-midwife who founded the first freestanding birth center in the D.C. area.

Coverage of the event and the campaign is available from numerous media, including Washington Examiner and Agence France-Presse (love the headline: “‘Our Bodies, Ourselves’ earmarked for US politicians”). Pearson also gave a great interview on FOX 5 in D.C.

We’re indebted to Malcolm M. Woods, who did a terrific job live-tweeting the event using the hashtag #OBOSCongress (tweets are still available if you want to check ’em out), and without whom this whole event would not have been possible.

Campaign supporter and Every Mother Counts founder Christy Turlington ended up not being able to make the event, but she sent out this message in support:

Keep watching this blog and Twitter and Facebook for more campaign updates. We’ve already passed the 15 percent mark of our $25,000 goal to send books to all members of Congress. Huge thanks to all of our supporters!

Please consider pitching in today to help us meet our goal. We’re offering perks for donations of all sizes — but perhaps the greatest perk is knowing you, too, helped to educate Congress.