Menu
Home > Our Impact > Our Bodies, Our Blog > Delivery of “Our Bodies, Ourselves” to Members of Congress Launches on Capitol Hill

Delivery of “Our Bodies, Ourselves” to Members of Congress Launches on Capitol Hill 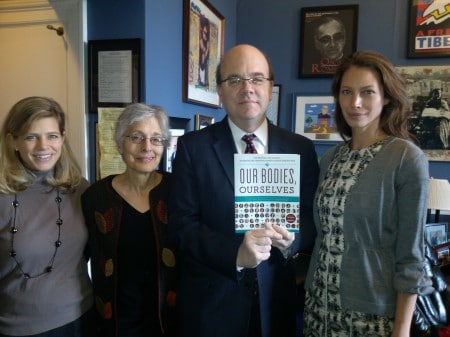 Last fall, following a sex-ed road trip with The Ladydrawers to deliver “Our Bodies, Ourselves” to former Rep. Todd Akin (of “legitimate rape” fame), Our Bodies Ourselves launched Educate Congress, a campaign to deliver the book to all members of Congress and key administration officials.

The basic premise: Everyone deserves access to accurate information concerning women’s reproductive and sexual health — especially those who write the laws.

Today OBOS kicked off delivery of the book, as Judy Norsigian, OBOS executive director and one of the original authors of “Our Bodies, Ourselves,” hand-delivered copies of the newest edition to about 20 legislators and staff members.

The point was made that the problem isn’t just poorly chosen words; rather, a lot more needs to be done to advance evidence-based health policy.

Norsigian walked the halls of Capitol Hill with Christy Turlington Burns, founder of Every Mother Counts, and EMC’s executive director, Erin Thornton. They submitted EMC’s petition to female members of Congress, asking them to support policies that protect the health and well-being of girls and women around the world, especially those that will reduce infant and maternal mortality rates.

Doing this on the day that the House finally passed the Violence Against Women Act made it particularly poignant. 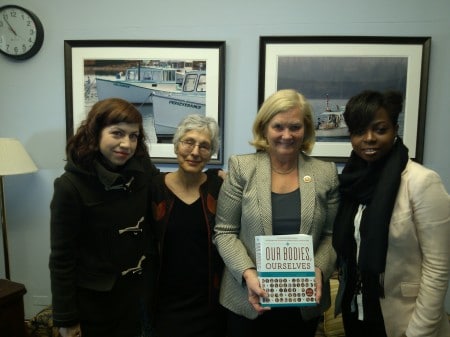 Thanks to Allyson Reddy and Grace Adofoli, interns at the National Women’s Health Project, the book launch was a success. More books will be delivered in the coming weeks, until every member of Congress has, in their office, up-to-date information they can rely on when drafting bills that have a real impact on girls and women.

A big thank you to the supporters of Educate Congress! And a special shout out to fellow road-trippers Anne Elizabeth Moore, Rachel N. Swanson, Nicole Boyett and Sara Drake; Congress scheduler Christina Knowles; everyone who participated in the making of the Educate Congress video, especially Paul Noble and Anthony Cupaiuolo (bro!); and Malcolm Woods, who helped organize the Educate Congress launch at the National Press Club and kept the word going on Twitter (with the aid of “The West Wing” staff). All of you made this happen! 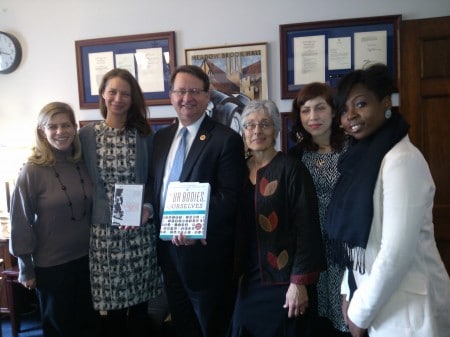