Women’s History: The New York Times Reviews “Our Bodies, Ourselves” 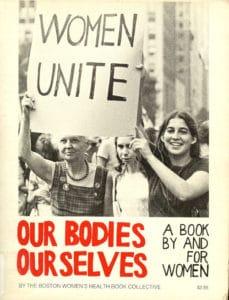 Forty years ago today, The New York Times reviewed “Our Bodies, Ourselves” under the headline “Thinking About the Thinkable.”

It’s fascinating to see how the book was received in the mainstream press — and, in this case, how one of the most prominent book reviewers of the late 20th century, Christopher Lehmann-Haupt, approached the text.

I admit I was surprised to see his byline when I looked up the review, after being alerted to the anniversary on Twitter via @Feministory.

Lehmann-Haupt was the senior daily book reviewer for the Times back then, a position he held from 1969 to 2001. But as he acknowledges up front, you wouldn’t necessarily expect to see the first women’s health book of its kind reviewed by a man.

He writes that he took on the review “first, because the book looked useful and I wanted an excuse to read it carefully, and second, because those members of the movement I respect have often argued that women’s liberation means men’s liberation, and it is an argument I am willing to try on.”

His perspective is laudable, although sometimes Lehmann-Haupt seems to forget it’s not really for or about him.

The review is of the first edition published by Simon & Schuster. Prior to 1973, the book had appeared in two other formats: In 1970, a group of women printed and stapled together a 193-page course booklet, “Women and Their Bodies,” based on their own research and exploration of women’s health and social/political issues. The booklet is available online (download “Women and Their Bodies” [PDF]).

In 1971, they changed the name to “Our Bodies, Ourselves” — to emphasize women taking full ownership of their bodies — and New England Free Press republished it that same year, selling 250,000 copies, mostly by word of mouth. That edition was one of 88 books selected by the Library of Congress for the 2012 exhibit “Books That Shaped America.”

The strong demand taxed the small New England Press, which is when Simon & Schuster stepped in (read the preface to the 1973 edition).

By then the need for the book had been well established; “it doesn’t much matter whether male reviewers like it or not,” Lehmann-Haupt wrote. That does not, however, stop him from dragging out the discussion:

But do I like it? you are still wondering. Let me duck the question a moment longer by saying that since the book was written collectively — with, for example, “A Boston gay collective” contributing the chapter on Lesbianism, “In Amerika They Call Us Dykes”; and several older women helping out on the chapter covering menopause — it was never expected that everyone would be pleased with all the contents, not even the women who put the book together.

Nor does he have a problem with declaring what any “sensible” woman would appreciate:

I don’t see how any sensible woman — even an antifeminist one — could fail to be enlightened by the book’s lucidly informative chapters on “The Anatomy and Physiology of Reproduction and Sexuality,” on nutrition, exercise, venereal disease, childbearing and postpartum emotional problems; or even by the philosophy that informs them, to wit, that knowledge of one’s body is essential to control of one’s body, and that control of one’s body is essential to living in contemporary America. (As you will see if you read the book, it’s a more radical idea than it may sound.)

On the other hand, I can imagine that some women — even halfway liberated ones — may not agree with the book’s extreme open-mindedness on the questions of birth control and abortion, or its specific conclusion that “it is a myth that the infant will be psychologically damaged unless the mother is always present.”

Let that last line sink in for a moment.

Lehmann-Haupt concludes with his “quibbles” and his findings:

I am still trying to dovetail all the talk about “living less in our heads” and responding “to our feelings” with the book’s overriding message that women must know and think about their bodies in order to get control of their lives. (I’m sure there’s a way to reconcile these two messages, but trying to find it has me climbing an epistemological wall.)

But I learned a great deal from this book that I did not know before, or had somehow forgotten. And if the authors are correct in their belief that one of the major reasons why men oppress women is because “of the male fear and envy of the generative and sexual powers of women” — and I think they are — why then it will do no harm at all for men to read “Our Bodies, Ourselves” and expend a little rational thought on these powers. Nor will it do much harm for a male to review it.

For all my quibbles, to have a man in 1973 so willing to join the feminist movement is a credit to him — and to the book.

The ninth and newest edition of “Our Bodies, Ourselves,” published in 2011, was named one of Library Journal’s best consumer health books of the year. Find out what the fuss is (still) all about.