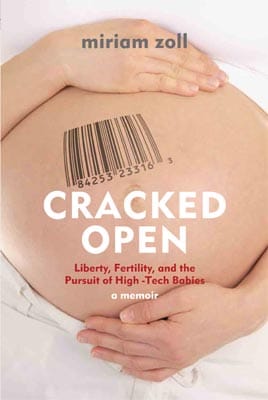 Our Bodies Ourselves board member Miriam Zoll has a new book coming out on May 1, “Cracked Open: Liberty, Fertility and the Pursuit of High Tech Babies.”

Zoll tells her own story of infertility and IVF treatments, and shares what she learned along the way about assisted reproductive technologies.

From the book description:

When things don’t progress as she had hoped, she and her husband enter a science-fiction world of medical seduction, capitalist conception and bioethical quagmires. Desperate to conceive, they turn to unproven treatments and procedures only to learn that the odds of becoming parents through reproductive medicine are far less than they and their generation had been led to believe.

OBOS Co-Founder and Executive Director Judy Norsigian contributed to the foreword with Michele Goodwin, a professor of law at the University of Minnesota. Learn more about Zoll and “Cracked Open” as she shares her story on the My Fertility Choices site.

Zoll is also collecting stories on infertility and reproductive technology via her website. Requests to have her come speak can also be made online.