Menu
Home > Our Impact > Our Bodies, Our Blog > State by State: Laws Restricting Abortion and Family Planning as of Mid-2013

State by State: Laws Restricting Abortion and Family Planning as of Mid-2013 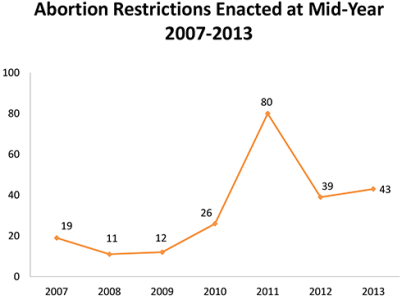 If you’re having trouble keeping up with the assault on abortion rights across the states, you’re not alone.

While we’ve been hearing a lot out of Texas, and some from North Carolina and Ohio, many other states have enacted regulations restricting access to healthcare.

These include obstacles such as requirements for hospital admitting privileges for providers, bans on medication abortions by telemedicine and abortion after 20 weeks, and biased counseling laws — requiring, for instance, that women be provided with information falsely linking abortion to breast cancer.

Other new laws, such as restrictions on family planning funding, have further affected women’s access to reproductive health services.

How bad is it? According to updated information from the Guttmacher Institute, states enacted 106 provisions related to reproductive health and rights in the first six months of 2013 alone. This includes 43 restrictions on access to abortion — the second-highest number ever at the mid-year mark, and as many as were enacted in all of 2012.

Guttmacher points out a glimmer of sunshine as well: Among the numerous restrictions, some states saw new laws to expand comprehensive sex education, make STI treatment of partners easier, and increase access to emergency contraception for women who have been sexually assaulted.

Rachel Maddow this week looked at the overall impact of state-by-state anti-abortion laws, showing how states under Republican control since the 2011 elections are restricting access. Maddow also provides more information on some of the individual states.

Visit NBCNews.com for breaking news, world news, and news about the economy