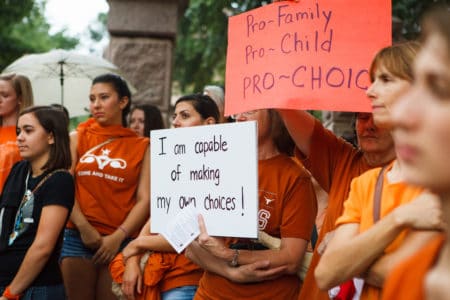 There have been a number of recent articles and campaigns detailing, often from a personal perspective, how legislation restricting access to abortion will harm women’s health.

A new article that will be published in the journal Contraception goes a step further — it draws on research to address the specific hardships women face and urges healthcare providers to push back against such restrictive measures.

The authors — researchers from university medical centers and health policy organizations such as Ibis Reproductive Health who have collaborated together before on matters of abortion and women’s health — open with a sharply worded question: “What happens when abortion access is severely restricted for 26 million Americans? Texas is about to find out.”

Texas, as you might recall, passed a law in July — the subject of State Sen. Wendy Davis’s epic filibuster — that mandates hospital admitting privileges for abortion providers; requires abortion facilities to meet the same standards as ambulatory surgical centers; bans most abortions after 20 weeks post-fertilization (22 weeks “pregnant”); and restricts use of medication for abortion to an outdated regimen. A lawsuit was filed to try to overturn some of these restrictions.

The admitting privileges requirement was temporarily blocked this month, then reinstated, causing up to a third of abortion clinics to suddenly close and forcing women to scramble for alternatives. The issue may end up in front of the Supreme Court. (More wrangling took place this week; view the latest coverage at RH Reality Check).

Despite claims that the new restrictions are for women’s “safety,” the authors report that the evidence suggests something different: “Evidence from other countries indicates that severely restricting abortion does not reduce its incidence — it simply makes unsafe abortion more common.”

Among the public health concerns raised in this article is the potential increase in the number women attempting to induce their own abortions:

In 2012, we conducted a survey with 318 women seeking abortion in six cities across the state to assess the impact of the 2011 restrictions. We found that 7% of women reported taking something on their own in order to try to end their current pregnancy before coming to the abortion clinic. This proportion was even higher — about 12% –among women at clinics near the Mexican border. Misoprostol and herbs were the methods women more commonly mentioned. By comparison, a nationally representative survey of abortion patients in 2008 found that 2.6% reported ever taking something to attempt to self-induce an abortion. The confluence of extremely limited access to abortion in the context of poverty, access to misoprostol from Mexico, as well as familiarity with the practice of self-induction in Latin America, makes it particularly likely that self-induction will become more commonplace in Texas.

Early medical abortion with misoprostol is a safe and effective regimen and is  recommended by the World Health Organization in settings without access to mifepristone. But if women do not have accurate information, they may use ineffective dosages and may not realize the abortion failed until much later in pregnancy, forcing them to seek a second-trimester abortion or continue the pregnancy and have a child they do not want or feel they cannot care for. Using misoprostol in the second trimester also increases the risk of hemorrhage that might require surgical intervention or transfusion, as well as the risk of uterine rupture if inappropriately high dosages are used, especially with a history of prior cesarean delivery. And while misoprostol is unquestionably a safe method to self-induce abortion, women may use a variety of less effective and more dangerous methods to end a pregnancy on their own, including taking herbs or self-inflicting abdominal trauma.

The authors also explain that a reduction in the number of clinics, due to the provision requiring clinics to meet the standards of ambulatory surgical centers (ASCs), is likely to cause delays for women seeking care, resulting in later, more costly abortions. They describe the following scenario involving delays and travel burdens:

In 2011, 2,634 women living in the Valley obtained an abortion. Neither of the two existing abortion clinics in the Valley is an ASC, and one of the clinics has already announced its planned closure. The nearest ASC is in San Antonio, about 250 miles away, adding about eight hours of travel time to the process of obtaining an abortion. If a woman chooses a medical abortion, state law requires her to make this long journey at least three times. These barriers are likely to be too great for many women.

The three visits rule is due to a provision in Texas law requiring doctors to follow an outdated regimen for medical abortion. Most U.S. providers, they note, use a newer protocol, which has been found safe and effective — and requires only two visits instead of three. They write:

Texas is only one of several states attempting to regulate abortion out of existence — a trend that should be deeply troubling to the medical community. First, it represents a stunning incursion into the physician’s exam room, allowing state representatives to dictate how doctors should practice medicine. Second, it is in blatant contradiction to evidence-based medicine.

And they call on physicians to be more involved in protesting this type of legislation:

As the fight for abortion rights in Texas moves from the legislature to the courts, it is critical that reproductive health specialists — both clinicians and researchers — add their voices to this outcry, highlighting the negative impact of these restrictions and demanding that all women have the right to comprehensive health care services.

The article, “The Public Health Threat of Anti-Abortion Legislation,” will appear in an upcoming issue of Contraception.