Menu
Home > Our Impact > Our Bodies, Our Blog > Striving for Gender Equity: My Journey to Armenia

Striving for Gender Equity: My Journey to Armenia 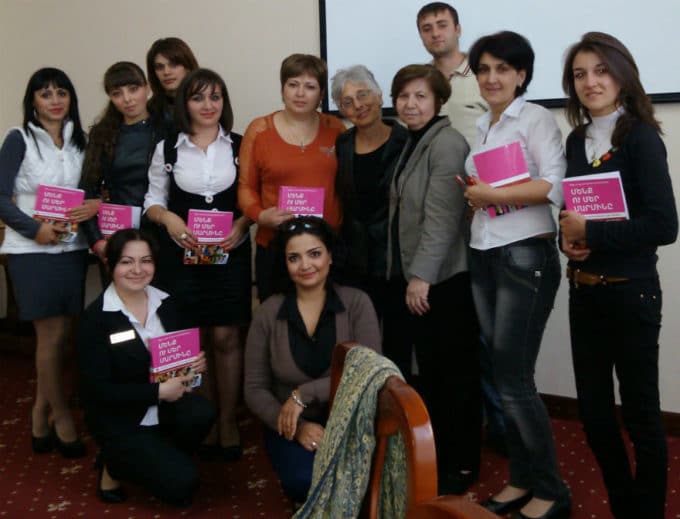 Looking back on 2013, one of the highlights for me was a trip to Armenia where I spoke about gender equity and witnessed a dozen young women organizing around the lack of sexuality education in their community.

I was a featured speaker at a discussion on “Promoting Gender Equity and Breaking Gender Stereotypes,” hosted by the American University of Armenia (AUA), the Women’s Support Center in Yerevan, and the Armenian International Women’s Association. Dr. Bruce Boghosian, AUA president, and Dr. Meri Khachikyan, coordinator of the Armenian “Our Bodies, Ourselves” translation/adaptation project, attended, along with students, faculty, Peace Corps volunteers, and NGO staff and directors,

Domestic violence is a major concern in this small country — as it is in all of the countries where OBOS has global partners. As part of OBOS’s efforts to encourage men’s engagement in violence prevention, we connected a young man on the AUA panel with staff at Jane Doe Inc., the Massachusetts Coalition Against Sexual Assault and Domestic Violence, which provided him with slides about the role men can play in stopping violence.

Another concern addressed by panelists was the growing problem of sex-selective abortion in Armenia (also common in the neighboring countries of Georgia and Azerbaijan). Approximately 115 boys are born for every 100 girls; only China has a more skewed rate.

Following the AUA event, I attended several meetings with members of groups involved in the Coalition to Stop Violence Against Women in Armenia. In a country where government officials and church leaders have at times endorsed or congratulated those committing homophobic and sexist acts of violence, these courageous activists have been known to disrupt high-level meetings to draw attention to women’s and LGBT rights in Armenia.

I also traveled to rural Dilijan with Dr. Khachikyan, where I witnessed the initial organizing efforts of about a dozen young women (and one young man) concerned about the lack of sexuality education in their conservative community. They came up with several excellent ideas about meeting venues that would be safe spaces for young women, as well as ideas for outreach via social media, and were ready to take on problematic cultural practices.

For example, many parents of young women still do a “check the bed for blood” test after a newly married couple spends its first night together, looking for signs their daughter remained a virgin before marriage. If they find blood, they take a basket of red apples to the groom’s parents to acknowledge the young woman’s “purity.” Plastic surgeons now do a brisk business with hymen reconstruction in many parts of the country, even though this is technically illegal.

Despite the numerous issues women face in Armenia, the intergenerational advocacy and critical support provided by a number of European and American funders contribute to the continued growth of a grassroots movement that will improve the health and well-being of women and girls.

Before leaving, Dr. Khachikyan presented each of the young organizers with their own copy of the latest Armenian edition of “Our Bodies, Ourselves.” I was moved by their enthusiasm — as I have been so many times when talking with women about how the book changed their lives.

Plus: Earlier this year, Taleen K. Moughamian, a women’s health nurse practitioner in Philadelphia, wrote about her experience providing health services in Armenia. Learn more about OBOS’s partner in Armenia, “For Family and Health” Pan Armenian Association (PAFHA), and efforts to adapt and distribute women’s health information based on “Our Bodies, Ourselves.” The preface to the Armenian edition is available in English.