Menu
Home > Our Impact > Our Bodies, Our Blog > When Off-Label is Safer for Women: The Politics of Medication Abortion

When Off-Label is Safer for Women: The Politics of Medication Abortion

Among the numerous tactics used to restrict abortion access, several states have proposed or implemented laws that impose unnecessary restrictions on medication abortion. These restrictions interfere with evidence-based practices that are considered safer for women’s health.

Some states are requiring that medication abortions follow the exact regimen approved by the FDA back in 2000, though research has since proven that lower doses are safer and just as effective. (The FDA has approved updated labeling since 2000, but these updates have not addressed the commonly used lower-dose regimen; it is not clear whether the drug company plans to submit new data and request these changes.)

The FDA protocol calls for a clinician to provide 600 mg of the first drug, mifepristone, for the patient to take orally, followed 48 hours later by 400 mcg of oral misoprostol. More modern, evidence-based regimens call for only 200 mg of mifepristone, followed later by 800 mcg of misoprostol that is held in the cheek until it dissolves instead of swallowed. The newer regimen also allows for the misoprostol dose to be taken at home. 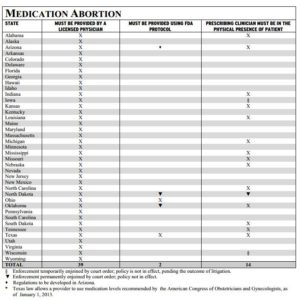 But states looking to make abortions more difficult for women to obtain are requiring physicians to administer the second dose in person. This mean women are forced to make an additional clinic visit — a significant hardship for many patients.

It’s common practice for doctors to prescribe drugs “off-label,” which means in a different way or for a different purpose than what the FDA has specifically approved. This allows doctors to use the most current evidence and their own judgment. Indeed, a new study accepted for publication in the journal Contraception illustrates how the practice of medicine can change to improve patient safety after a drug has been approved by the FDA.

They found three deaths out of 218,928 abortions before the change, and no deaths among 711,556 abortions after the change. The Planned Parenthood study used the common reduced dose regimen of 200 mg mifepristone followed by 800 mcg of misoprostol. Other studies have also demonstrated the safety and effectiveness of the reduced mifepristone dose.

When politicians insist on the outdated FDA-approved regimen, they are prohibiting the use of the safer approaches.

The outdated FDA regimen, says Rachael Phelps, medical director for Planned Parenthood in Rochester and Syracuse, is “dramatically less effective, has more side effects, is harder for women to use, and increases the likelihood of an additional invasive procedure compared to the evidence based regimen. Mandating the FDA regimen forces doctors to provide substandard medical care and is just plain bad medicine.”

A case challenging such a law in Oklahoma had been set to go before the Supreme Court, but was dismissed following a state Supreme Court ruling that the law would effectively ban all medication abortion in the state. Texas’s controversial HB 2 law also requires adherence to the outdated FDA-approved regimen.

For a quick guide to additional states with restrictions requiring the old regimen or barring remote doctors from supervising medication abortion via telemedicine, view this fact sheet from Guttmacher Institute.

The federal Women’s Health Protection Act (S1696 / HR 3471) introduced this year would prohibit such restrictions. Among provisions addressing telemedicine abortion, hospital admitting privileges, and other targets of recent legislation, the bill would forbid any “limitation on an abortion provider’s ability to prescribe or dispense drugs based on her or his good-faith medical judgment, other than a limitation generally applicable to the medical profession.” Contact your senator or representative to support this Act.