Breast cancer detection has become a more controversial subject over the past several years, with routine screening mammograms — the kind many women are encouraged to undergo starting in their 40s — drawing more scrutiny.

More and more, researchers and clinicians are acknowledging that screening mammography has a high rate of false alarms, causing worry along with sometimes unnecessary treatment. 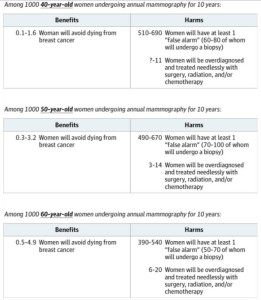 H. Gilbert Welch, a professor at the Dartmouth Institute for Health Policy and Clinical Practice, recently wrote an excellent New York Times op-ed exploring the difficult science around breast cancer screening. Explaining the findings of a study on the benefits and harms of screening mammography that he and Honor J. Passow, also of the Dartmouth Institute, published last month in JAMA Internal Medicine, Welch asks how much overdiagnosis we’re willing to tolerate compared to the possibility of reducing deaths from breast cancer.

Using data from radiologists who perform mammograms, Welch and Passow concluded that among 1,000 40-year-old American women screened annually over the course of a decade, between 0.1 and 1.6 women will avoid dying from breast cancer. (See chart at left; click to view full size.) A staggeringly high number — between 510 and 690 women — will have at least one false alarm (60-80 of whom will undergo a biopsy), and up to 11 women will be overdiagnosed and treated needlessly with chemotherapy or radiation therapy, or surgeries such as lumpectomy or mastectomy.

For 50-year-old women screened annually for 10 years, the numbers are as follows:

* 3-14 women will be overdiagnosed and treated needlessly.

And for 60-year-old women screened annually for 10 years:

* 6-20 women will be overdiagnosed and treated needlessly.

“Overtreatment” sometimes occurs when women receive treatments for cancers that would never have gone on to grow, spread, or cause health problems. In those cases, surgery, chemotherapy, and other treatments don’t provide any health benefit, but there are clear harms. Unfortunately, there is no way to know which cancers would go on to be deadly.

Meanwhile, there is little public awareness that routine screening can lead to both false alarms and overtreatment. A recent online survey of middle-aged Americans, notes Welch, suggests that acceptance of routine screening would diminish if the facts were more readily available.

Welch argues that more research is needed, especially on whether older findings showing that early detection might save lives still matter, now that treatment for breast cancer has changed and improved. He is, however, pessimistic about whether trials will happen that would help answer these questions, or explore outcomes when women choose more or less screening:

Two randomized trials could begin to answer the central question of mammography interpretation: How hard should the radiologist look? Women who view mammography favorably might be willing to be screened under either the current approach or a high-threshold approach — meaning their radiologist would ignore small, likely harmless abnormalities found on a mammogram.Those who view it less favorably might choose that high-threshold approach (knowing that the harms of false alarms and overdiagnosis would be minimized) or forgo mammography completely.

Putting the two trials together, we could finally learn what level of screening minimizes false alarms and overdiagnosis while saving the most lives. Most experts would say that it’s never going to happen. It would cost too much, take too long and need too many subjects.

We agree with Welch that more needs to be done — both in terms of research and educating the public about the real risks and benefits of their routine screening decisions.

“A screening program that falsely alarms about half the population is outrageous,” writes Welch, adding:

To be sure, many women are quickly reassured by a second test that their breast is normal. But others — while told they don’t have cancer — are told that their breast is somehow abnormal, that they have dysplasia or atypia, that they are at ‘high risk.’ Whether you blame the doctors or the system or the malpractice lawyers, it’s a problem that needs to be fixed.

Plus: For more information, read our previous posts on breast cancer, including several on what is known about the benefits and risks of routine mammography. Good starting points are: “New Mammogram Guidelines Are Causing Confusion, But Here’s Why They Make Sense,” “Do Screening Mammograms Do More Harm Than Good?” and “The Benefits and Harms of Routine Mammograms.”