Menu
Home > Our Impact > Our Bodies, Our Blog > Rally Against Sexual Violence in Nepal Draws Thousands 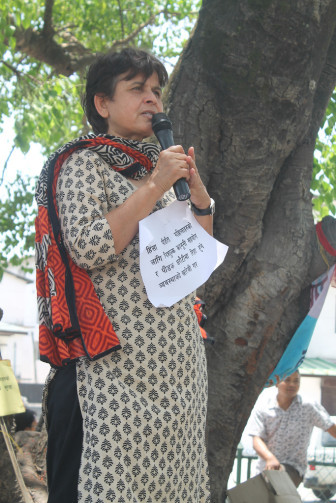 Dr. Renu Rajbhandari stated that recognition of a woman’s ownership of her body is necessary in order to respect her choices. / Photo courtesy of WOREC

Last month, the National Alliance of Women Human Rights Defenders (NAWHRD) and the National Campaign Against Rape (supported by more than 30 human rights organizations) organized a massive rally in Kathmandu to raise awareness of the violations of human rights that women face daily in the country; the need to improve access to justice in cases of sexual violence; and the importance of the recognition of women’s sexual rights and body integrity.

Following a peaceful demonstration in Bhrikuti Mandap, thousands of activists marched to Bhadrakali, where speakers addressed the crowd.

Dr. Renu Rajbhandari, chairperson of the NAWHRD and founder of the Women’s Rehabilitation Centre (WOREC), a human rights organization that has published booklets based on “Our Bodies, Ourselves,” said that the National Campaign Against Rape has raised the attention of many government stakeholders, political parties, youth and women political movements.

While the legitimacy of the demands has been recognized, no action has been taken to change Nepal’s rape law — investigation procedures are long and ineffective, and political interference is common.

Our Bodies Ourselves has worked closely with WOREC, particularly on cross-border commercial surrogacy. Learn more about WOREC’s work and the fight against violence and for recognition of women’s sexual rights in Nepal.