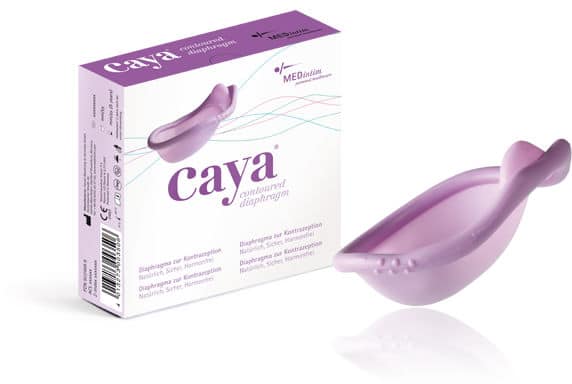 An image of the Caya Contoured Diaphragm currently available in Canada and some European countries. The FDA recently cleared it for U.S. markets.
By Rachel Walden | September 17, 2014

A newly designed diaphragm cleared for sale in the United States could increase the appeal of this barrier method of contraception.

The SILCS diaphragm — now called the Caya Contoured Diaphragm — was recently granted market clearance by the FDA. The silicone, one-size-fits-most device is already available in 14 European countries and Canada. It’s expected to be available in the United States in about a year.

The key difference between this diaphragm and others is there’s no need for women to undergo a pelvic exam to get it sized, and often resized again later — an extra step that prevented some women from considering the diaphragm.

The Caya Contoured Diaphragm is the result of a 10-year design process — involving women, their partners, and healthcare providers in five countries — and a collaboration between PATH (a Seattle-based global health nonprofit), CONRAD (a reproductive health product development organization operated through Eastern Virginia Medical School), the U.S. Agency for International Development (USAID), and other partners.

Through this user-centered design process, women and their partners were active agents developing a diaphragm that better speaks to their varied needs and desires. The result is a device with several features that allow it to be easy to insert, comfortable to wear, and easy to remove. The contoured shape allows this single-size device to fit a broad range of women.

“This approval represents a significant and hard-earned milestone in the global effort to expand women’s contraceptive options,” said Steve Davis, PATH president and CEO. “It demonstrates the best of what multi-sector collaboration can achieve when we harness our shared expertise to develop solutions that can improve the health of women and their families around the world.”

“This woman-initiated, nonhormonal contraceptive barrier method has great potential to improve women’s reproductive health options by addressing several of the reasons for unmet contraceptive need,” said Judy Manning, of the team for contraceptive research and development at USAID.

The device, added Manning, may fill another needed role by “serving as a delivery method for gels that help protect against HIV and other sexually transmitted infections — it could be our first true multipurpose prevention product.”

Distribution in the United States may not be as widespread, however, as it is in other countries. Kessel, a German manufacturer, distributes the SILCS Diaphragm as the Caya contoured diaphragm in Europe and Canada via family planning providers, pharmacies, and online shops. A presentation on first-year use indicates that over-the-counter access is common, with only two of the 14 European countries where it is available — France and Italy — requiring a prescription.

Now that the FDA has granted market clearance, Kessel is seeking a distribution partner to introduce the diaphragm “through family planning providers,” according to this statement.

Stopping Keystone: A Victory for Native Women’s Health by Guest Contributor July 1, 2021 By Hannah Sachs-Wetstone In early June, after more than ten years of conflict, the Keystone XL oil pipeline project was halted by TC Energy, the company behind the project. This is a victory for Indigenous communities and environmental activists. However,…
Free the Pill! by Guest Contributor May 28, 2020 by Carrie Baker Sixty years ago this month, the U.S. Food and Drug Administration approved the birth control pill for distribution in the United States — a game changer for women’s lives. Before approval of the pill, most women were…
Adapting “Our Bodies, Ourselves” to Brazilian Portuguese: The Translators’ Experiences by OBOS July 30, 2020 "[H]aving the opportunity of translating … “Our Bodies, Ourselves” to Brazilian Portuguese ... brings me a profound sense of accomplishment, since there is not such a complete book on women's health in Portuguese with so much information and so many…