Menu
Home > Our Impact > Our Bodies, Our Blog > Why Doesn’t a Viagra Equivalent Exist for Women?

Why Doesn’t a Viagra Equivalent Exist for Women? 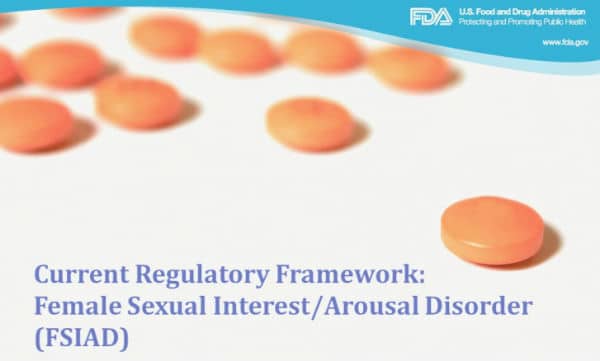 Given the historical exclusion of women from clinical trials and social attitudes about female sexual desire, it’s easy to assume that no Viagra-like drug is available for women because women’s sexual pleasure is not taken seriously enough to develop one.

The reality, though, is more complicated than a case of gender bias.

Last month, the U.S. Food and Drug Administration (FDA) held a public meeting and scientific workshop (fully available online) on female sexual dysfunction (FSD) and available therapies as part of its “patient-focused drug development” series. The workshop followed up on the FDA’s rejection of flibanserin, a proposed drug to treat FSD.

The drug was rejected in 2010, and again in 2013, with the FDA telling the drug maker, Sprout Pharmaceuticals, that additional work is needed to secure approval.

While proponents of the drug claim that the FDA has failed women, supporters of the decision (including Our Bodies Ourselves and the National Women’s Health Network) have argued that the safety and efficacy data does not warrant approval.

While there is disagreement about the definition, possible causes, and appropriateness of drug therapy in FSD, there’s been much hope for a medical solution to address low sexual desire. But at the 2010 review of flibanserin, a FDA committee found that Sprout Pharmaceuticals did not provide sufficient evidence that its drug was any more effective at increasing sexual desire and satisfaction than a placebo.

Given this lack of evidence, the FDA also decided that the potential benefits did not outweigh the risks, which include sleepiness, dizziness, fainting, fatigue, nausea and anxiety. Other concerns included depression and accidental injury (possibly due to the dizziness, fainting and sleepiness).

Unlike Viagra, which can be used as needed, flibanserin is designed to be taken daily, so the medication builds up in a person’s system. The FDA was also concerned about the number of patients (about 15 percent) who dropped out of the study due to adverse events, and possible interactions between flibanserin and other drugs, including common depression treatments and alcohol.

Even the Score Campaign Anything But Even

In an attempt to pressure the FDA to grant approval in spite of these findings, the Even the Score campaign has pushed for FDA approval of drugs for female sexual dysfunction. In doing so, the campaign appropriates feminist “choice” language. For example:

We believe that women have the right to make their own informed choices concerning their sexual health; that gender equality should be the standard in access to sexual dysfunction treatments; and that the approval of safe & effective treatments for low desire should be a priority for the FDA.

However, the campaign is not exactly a neutral party, and its interests go way beyond choice. Even the Score was created and is funded in part by drug companies, including Sprout Pharmaceuticals, the maker of flibanserin.

Even the Score has sought to build support for flibanserin by framing its approval as one of “sexual health equity.” But as the New View Campaign, which works to challenge “distorted and oversimplified messages about sexuality that the pharmaceutical industry relies on to sell its new drugs,” notes:

The campaign exploits women’s legitimate concerns about gender bias in medical research as it disseminates phoney sexuality facts. As Barbara Mintzes of the University of British Columbia put it, “It is hard to see what is sexist about the national drug regulatory agency refusing to approve a drug that was ineffective.”

Among its objections to FDA approval of drugs like flibanserin, New View Campaign lists the following:

Differences Between Flibanserin and Viagra

Our Bodies Ourselves is one of many organizations that signed a 2014 letter to FDA director Dr. Janet Woodcock making similar point. The letter notes the many differences between flibanserin and drugs like Viagra:

More to the point, however, the gender equity argument ignores the real safety difference between flibanserin and the drugs approved for men: a different indication for use, specifically the dosage and administration. All but one of the drugs approved for men are taken on an as-needed basis, whereas flibanserin, a central nervous system serotonergic agent with effects on adrenaline and dopamine in the brain, requires chronic — daily, long-term — administration. This raises toxicological concerns that make it appropriate for the FDA to subject flibanserin to elevated safety scrutiny. Substantial adverse events reports and drop-out rates in the trials rightly required serious consideration.

So where does that leave us? It’s important that we continue to look critically at the safety and efficacy of drugs proposed to treat a lack of sexual desire or sexual satisfaction in women. Flibanserin, so far, hasn’t survived that scrutiny.

At the same time, we can continue to question the over-medicalization of women’s sexual function; there is a wide range of what’s considered “normal” in human health and desire. In some women, physical factors such as medication side effects or a medical condition, or emotional factors such as relationship stress or trauma, can negatively affect a person’s sex drive. (Leonore Tiefer, an associate professor of psychiatry at New York University and founder of New View Campaign, has written a lengthy case study on FSD and disease mongering.)

For women who are frustrated by low desire or arousal without a known underlying cause, we should continue to encourage sound research and the pursuit of safe, effective therapies. Hopefully some day there will be therapeutic options we can point to with confidence in both their efficacy and safety.

Stopping Keystone: A Victory for Native Women’s Health by Guest Contributor July 1, 2021 By Hannah Sachs-Wetstone In early June, after more than ten years of conflict, the Keystone XL oil pipeline project was halted by TC Energy, the company behind the project. This is a victory for Indigenous communities and environmental activists. However,…
In the Fight Against HIV, Gendered Assumptions Have Deadly Consequences by OBOS August 19, 2021 By Charlotte Babbin In October 2019, the FDA approval of the new HIV-prevention drug Descovy was met with great excitement by doctors, HIV researchers, and many people at risk of HIV infection. Descovy functions as a pre-exposure prophylaxis (PrEP), medicine…
Free the Pill! by Guest Contributor May 28, 2020 by Carrie Baker Sixty years ago this month, the U.S. Food and Drug Administration approved the birth control pill for distribution in the United States — a game changer for women’s lives. Before approval of the pill, most women were…