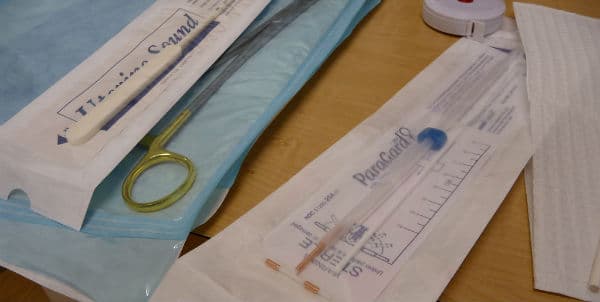 When Wendy Sue Swanson started out as a pediatrician eight years ago, it never crossed her mind to bring up the option of intrauterine devices – an insertable form of long-acting contraception – when she had her regular birth-control discussions with teenage patients who were sexually active.

“The patch had been the thing,” she said, referring to a small, band-aid-like plastic patch that transmits hormones through the skin to prevent unwanted pregnancies.

But Swanson’s approach changed after a casual conversation with her sister-in-law. This relative wasn’t a doctor, but she worked at the Adolescent Pregnancy Prevention Campaign of North Carolina, and she told Swanson that the devices could be used as a first choice of contraception for teenagers. Now Swanson regularly discusses IUDs, which are more than 99 percent effective, in her Seattle practice.

“I thought, ‘I can’t believe I don’t know this and no one else in my office knew’ ” that IUDs could be a good choice for some patients, she said.

Yet some pediatricians and other doctors worry they aren’t properly prepared to make this form of birth control available, because their training did not cover insertion of the devices. Experts say this has to change, starting during medical residencies, especially among pediatricians who will treat teenagers.

Serious medical problems reported with the use of the Dalkon Shield in the 1970s frightened many women away from IUDs, and the extra cost associated with their insertion often stopped women from using them. But the devices have become increasingly popular.

IUDs, which use copper or hormones to block sperm from fertilizing eggs, are considered safe in part because they do not use the problematic strings that were part of the Dalkon Shield, and a number of physician groups recommend them. And under the 2010 health law, women with insurance are eligible for IUDs without paying out-of-pocket costs.

Almost 12 percent of women who used birth control between 2011 and 2013 chose long-acting contraception such as IUDs or hormonal implants, a rate surpassed only by contraceptive pills and condoms, according to a recent analysis by the Guttmacher Institute.

Last fall, the American Academy of Pediatrics for the first time recommended IUDs as a first-line form of contraception for adolescents who have sex, though condoms and the pill are also accepted options. This recommendation builds on support from the American College of Obstetricians and Gynecologists, which in 2011 termed it the most effective form of birth control and noted that it posed minimal risks.

A year later, the group recommended it specifically for teens. Rare problems reported include disruption of menstrual cycles and, in rarer instances, perforation of the uterus. The IUD also can occasionally be expelled by a woman’s body, meaning it no longer prevents pregnancy.

Once inserted, IUDs – which last for years before they need to be removed or replaced – don’t require daily attention. This makes them easier to manage than options such as condoms or daily birth control pills, which teenagers must remember to use or, in the pill’s case, take on a daily basis.

Unlike condoms but like the pill, the IUD doesn’t prevent sexually transmitted diseases. Though the patch is about as effective as an IUD, it requires weekly maintenance and has attracted scrutiny in recent years for potential side effects such as strokes and blood clots.

“So many kids never pick up the pills, or pick up the pills and don’t take them right,” said Melanie Gold, medical director of Columbia University’s School-Based Health Centers. “Clearly, an IUD is a better choice.”

But even with this relatively recent buzz, a December editorial in the Journal of the American Medical Association Pediatrics asserted that pediatricians often aren’t trained in the procedure – making it, experts said, harder for teenage girls to access this form of birth control, unlike adult women, who are more likely to see a gynecologist.

Julia Potter, a doctor based in New York-Presbyterian Hospital’s pediatric department and a co-author of the editorial, said the instructors who teach the adolescent medicine often aren’t themselves trained in IUD insertion procedure. Medical residents then may not pick up the skills they would need to provide this birth control option once they start practicing.

If residents are exposed to the procedure – something that depends heavily on the patients they happen to see during that month-long rotation – that time frame is “certainly not enough time to learn how to put in an IUD,” said Jane McGrath, chief of adolescent medicine at the University of New Mexico.

Doctors offered different thoughts on how many times would be enough to become competent in inserting IUDs, but Gold suggested it might take 10 insertions before a physician would feel comfortable administering it.

Pediatricians also may be less comfortable offering IUDs to patients than are other doctors, suggests a 2013 survey published in the Journal of Adolescent Health. The study found that 26 percent of doctors practicing pediatrics or internal medicine provided IUDs or other long-acting contraception – compared with 88 percent of those identified as OB/GYNs or family medicine providers.

Those who do bring it up often refer patients interested in IUDs to other providers, such as gynecologists, said Annie Hoopes, a pediatrician and adolescent medicine fellow at Seattle’s Children’s Hospital. But for teens, such referrals can get complicated.

Privacy can be an issue, said Swanson, who doesn’t do the insertion procedure in her office. A teenager may not want her parents to know she’s receiving the birth control, but “if she goes in and sees a gynecologist and the visit is billed,” it’s impossible for the pediatrician to guarantee that won’t appear on an insurance statement.

In those situations, Swanson said, she will send patients to Planned Parenthood or a similar provider, where the visit doesn’t get billed to a parent’s insurance plan.

Teens also don’t always act on the referral, said Marissa Raymond-Flesch, an adolescent and young adult medicine fellow at the University of California at San Francisco.

“They may have limited control over their time – particularly if they’re trying to come to receive services confidentially,” she said. That fear of attrition, she added, is a reason her practice has moved to offer IUD insertions in-house. Otherwise, “adolescents could be lost to follow up.”

And in places where a provider is harder to reach, geography could pose another barrier to teens who don’t get the IUD from their regular doctor.

Meanwhile, conversations with patients and their parents have changed “dramatically” since she began discussing IUDs, Swanson said. Initially, parents would be nervous about IUDs – suggesting, for instance, that they might cause infertility for their daughters.

Now, by contrast, both teens and parents seem “very open to” long-acting contraception, she said, and teenage girls are more likely to ask about IUDs without prompting.

Swanson added that, though parents sometimes bring up birth control issues, she personally waits to raise the subject until the one-on-one portion of a teenager’s visit, when parents are required to leave the room.

It’s still unclear whether and how residency curricula might change to incorporate IUDs and similar forms of contraception. If they become more popular, residents – especially those with an emphasis on adolescent medicine — might come to demand such training in medical school.

But it’s hard to know when or how this might happen, said Mandy Coles, another co-author of the JAMA editorial and an adolescent medicine physician and assistant professor of pediatrics at Boston University School of Medicine.

“The bottom line is this is going to take more time and advocacy and research to improve training,” she said.

Free the Pill! by Guest Contributor May 28, 2020 by Carrie Baker Sixty years ago this month, the U.S. Food and Drug Administration approved the birth control pill for distribution in the United States — a game changer for women’s lives. Before approval of the pill, most women were…
Abortion and Women's Rights in 1970: A Film by Judy Norsigian October 12, 2020 In 1971, when abortion was illegal in all but a few states, a group of women came together to make a documentary film about their personal experiences with abortion.
Adapting “Our Bodies, Ourselves” to Brazilian Portuguese: The Translators’ Experiences by OBOS July 30, 2020 "[H]aving the opportunity of translating … “Our Bodies, Ourselves” to Brazilian Portuguese ... brings me a profound sense of accomplishment, since there is not such a complete book on women's health in Portuguese with so much information and so many…