Menu
Home > Our Impact > Our Bodies, Our Blog > Essure Contraceptive Controversy: Who Do You Believe?

Essure Contraceptive Controversy: Who Do You Believe? 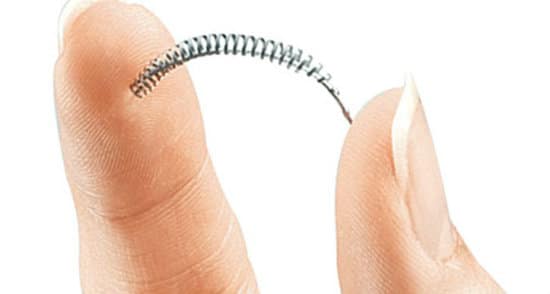 Essure, a non-surgical permanent birth control device, was approved by the FDA in 2002.
By Diana Zuckerman | PUBLISHED: November 3, 2015

When women tell the FDA and Congress that a contraceptive medical device is causing horrible pain and other serious problems, and they get together on Facebook to commiserate about their pain, but the company’s clinical trial data says the device is amazingly safe, who do you believe?

The National Center for Health Research became interested in Essure, a permanent birth control device, when we heard from several women about their terrible experiences. The Essure device, made up of flexible coils, is inserted into each fallopian tube to cause an inflammation. This inflammation is intended to close off the tube permanently, making pregnancy impossible. And yet, women told us that they knew many women who had gotten pregnant despite having Essure.

We then looked at the data about Essure on the FDA website and were surprised to see that the device was described as 99.8 percent effective and with very few side effects.

We wondered how to make sense of the differences between the reported data and what the women were saying. The “Ah-ha” moment came when several women told us that they had participated in clinical trials the FDA used as the basis for its approval. They told us that their reports of unrelenting, debilitating pain and other serious side effects were not included in the clinical trial data. Why? They said they were told by the doctors and nurses involved in the studies that the side effects were not caused by the device.

Then, in April 2014, Dr. Aileen Gariepy and her colleagues at Yale Medical School published an article in a medical journal estimating a 10-percent pregnancy rate for Essure — much higher than the rate for tubal ligation and long-term contraceptives.

The Essure Problems Facebook group now has 23,000 members talking about their terrible experiences with Essure. That suggests that these problems are far from rare. So a few months ago we decided to conduct our own study, which has more than 1,100 women with Essure problems, to determine what kind of problems they had.

Most of the women were in their 20s or 30s; 86 percent of them reported serious pain and 34 percent reported bleeding problems, which usually involved heavy bleeding. Some women told us that they were bleeding every day of the month, month after month. Twelve percent reported having to undergo hysterectomies.

Despite trouble finding a doctor who knew how to remove the Essure coils, about one-third of the women in our study have had Essure removed. All the pain and complications disappeared for about half of them. The ones that had perforations or other permanent damage caused by Essure found some relief, but not total relief when it was removed. Only about 5 percent reported no improvement.

How could this small device cause so much damage? Once it is in the body it is stretched out of shape, and the metal can pierce through organs.

Below you can see where one of the women in the clinical trials, Kim Hudak, reported her serious health problems after getting Essure. They are written down on her questionnaire, which was filled out by a nurse. At some point, some of her answers were crossed out and new responses were added to make it seem that Kim was very satisfied with Essure. 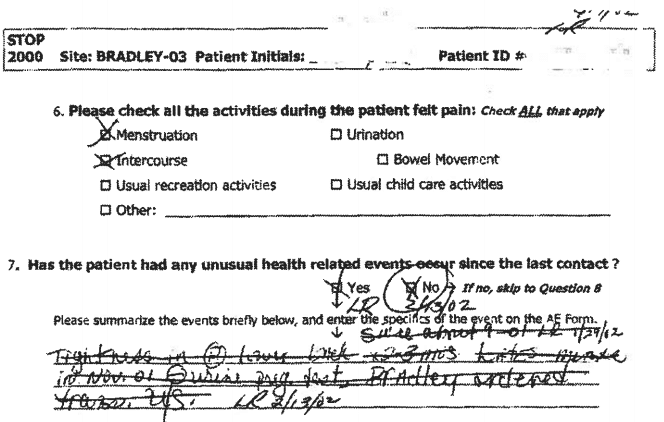 The nurse that was conducting the interview with Kim initialed the changes in the data to show that they were official. Kim was not aware that these changes were made at the time, and she did not approve them. She only found out about them when she was able to get these documents years later, with the help of a lawyer.

Kim wasn’t the only one participating in the studies whose problems were not reported. Other women told us that when they asked their clinical trial doctor to remove the Essure device because of their terrible pain, they were mysteriously dropped from the study — the study that was supposed to evaluate patients’ satisfaction and the safety of the device. As a result of being removed from the study without their consent, their negative experiences with Essure were no longer part of the data provided to the FDA about long-term impact of the device.

The entire purpose of clinical trials is to gather information about possible side effects, even unexpected ones. These reported problems should have been included in the study findings, in order to accurately evaluate how many women experienced these complications.

Obviously, the change in Kim’s data — which now shows she had an excellent experience with Essure — does not reflect the years of pain and problems that Kim reported as part of the study and told the FDA about during the FDA’s public meeting in September.

If I have to choose between believing the drug company, which keeps saying that Essure is very safe and that very few women have problems, and believing the women I’ve talked to, it isn’t much of a contest.

The women have little to gain by complaining: They are unable to sue, thanks to a Supreme Court decision written by Justice Antonin Scalia, stating that if the FDA examines clinical trial data saying a device is safe and effective, the company that makes it can’t be sued.

In contrast, the company that makes Essure, Bayer, has a lot to lose if it admits that Essure isn’t as safe as the company has been claiming.

On Oct. 13, researchers at Cornell published a new study about Essure. They found that women with Essure were 10-times as likely to need additional surgery in the first year after getting the device, compared to women who get their tubes tied.

Who do you believe?

Diana Zuckerman is president of the National Center for Health Research.

Free the Pill! by Guest Contributor May 28, 2020 by Carrie Baker Sixty years ago this month, the U.S. Food and Drug Administration approved the birth control pill for distribution in the United States — a game changer for women’s lives. Before approval of the pill, most women were…
In the Fight Against HIV, Gendered Assumptions Have Deadly Consequences by OBOS August 19, 2021 By Charlotte Babbin In October 2019, the FDA approval of the new HIV-prevention drug Descovy was met with great excitement by doctors, HIV researchers, and many people at risk of HIV infection. Descovy functions as a pre-exposure prophylaxis (PrEP), medicine…
Women with Breast Implants Should Not Need to Wait for Safety Information They Urgently Need by Guest Contributor July 1, 2020 by Rose Weitz and Diana Zuckerman Although breast implants have been sold since the 1960s, the U.S. Food and Drug Administration (FDA) first approved the use of silicone gel breast implants in 2006. By then, many women with implants had…