“Passing the Torch” by Elenore Toczynski
By OBOS | PUBLISHED: November 10, 2015

As one of the people here at OBOS who has long been invested in including the issues and perspectives of trans women and genderqueer persons in “Our Bodies, Ourselves,” I was beyond delighted when Laura Erickson-Schroth contacted the office some years back.

Laura was beginning work on the book that would become “Trans Bodies, Trans Selves: A Resource for the Transgender Community,” and she had a request for us.

In her work as a doctor-in-training, Laura said she had found a glaring need for the health care system to offer more informed and respectful treatment to trans women and men, and to all who live their lives outside the gender binary. Having grown up with “Our Bodies, Ourselves,” which she turned to repeatedly for guidance and encouragement, Laura envisioned a book that would be “by and for” the transgender community.

She aimed to put together a group to create a book that would empower trans people to know, love and care for themselves, as well as inform caregivers about what respectful and effective care should look like.

Like “Our Bodies, Ourselves,” the book Laura envisioned would include the voices of its audience — a wide range of transgender people. It would address issues central to transgender health and sexuality, from sex-positive HIV protection, to the politics of trans health care, to organizing against anti-trans violence.

When the book was finished, she asked, would OBOS founders be willing to write an afterword? What an honor for us! We responded with an enthusiastic yes.

I hope you have seen “Trans Bodies, Trans Selves” for yourself. What a beautiful and useful book! Laura and her co-writers and editors accomplished something profoundly important for each gender-questioning child, teen or adult who needs clear information and support delivered in the context of people’s real lives.

We at OBOS are immensely proud to be part of the line of activists whose work over the decades helped lead to “Trans Bodies, Trans Selves.” Here is our afterword. 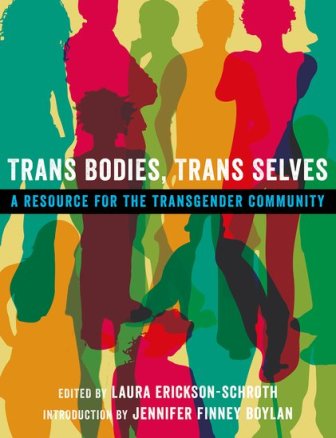 More than 40 years ago, in the early days of the second-wave feminist movement, a group of Boston-area women got together to talk about our experiences with health and sexuality. Most of us were in our 20s and 30s, and we set out to make a list of obstetricians/gynecologists whom we would recommend to others as doctors who respected us, listened to us, and gave us the information we needed. One by one, each of us realized we could not put our own doctor on the list.

We saw that we needed to research necessary information ourselves, to trust our own experiences of our bodies, and to advocate for — among other things — medical training that would prepare physicians (predominantly male at the time) to partner with us in our health care decisions.

We created a course to share this new perspective with others, and when women asked for printed materials, we wrote up the topics. “Our Bodies, Ourselves” was born. Over the years, new editions of the book have grown with the women’s health movement, expanding to include the voices of more and more women — lesbians, for example, and women of color, women with disabilities, older women, and, over the past decade, transgender and genderqueer people.

When Laura contacted our group a few years ago about the dream of “Trans Bodies, Trans Selves,” we were so excited. As with “Our Bodies, Ourselves,” a community of people who are the best experts on themselves has come together to create a resource of information, mutual support, and political advocacy that will strengthen many.

Thanks to “Trans Bodies, Trans Selves” and all the transgender folks who have been writing and teaching over the past many years, we, a group of cisgender women, now know that we can no longer say “a woman’s body” and mean only one thing. One person’s body may have a penis and testicles, and be a woman’s body. Another person’s body may have breasts or a clitoris, and be a man’s body. The revolutionary point is that we can name our gender identity for ourselves and rightfully expect respect and recognition. “Our bodies, ourselves” grows in meaning daily.

We welcome you as allies who will deepen and expand the work that has mattered so much to us. For example:

• We have, with the transgender community, a commitment to teaching medical personnel to treat their patients with informed respect. This is crucial for people of any gender who need gynecological and/or endocrine care. We will need to work together to promote the expansion of health and medical care training, accountability, and monitoring so as to include the whole range of competency requirements, encompassing every facet of any patient’s identity.

• Let us continue to advocate for affordable and accessible health care, including hormonal and surgical treatments for trans people who choose them.

• We at OBOS and the women’s health movement have long raised safety questions regarding the development and use of sex-related hormones like estrogen, progesterone, and testosterone, and advocated for more care in prescribing them. These hormones can be indispensable to transgender people who choose to use them. May we join in diligent advocacy to make these medications safer to use.

• We unite with you in wanting necessary health tests and screening to be affordable, universally accessible, and sensitively done. The PAP test, for example, done to detect exposure to human papilloma virus (HPV), is recommended for people of any gender who have a cervix.

• The women’s health movement understood many decades ago that violence is a health issue. May we work on this central health issue together!

“Our Bodies, Ourselves” has long affirmed the beauty of our bodies as they are, as we are. In the 2011 edition a trans woman named Danielle contributes to that conversation:

All women are bombarded with media indicating why our bodies aren’t perfect enough. But I’d say trans women (and trans men, to a lesser extent) are additionally laden with messages that our bodies can’t be attractive. That my very existence is “naturally” repugnant and repulsive. Finding things to like about your body is incredibly important.

Sometimes I just need to remind myself that I am hot and perfect and that it’s an act of bravery and defiance to think such things, in the face of this misogynist culture that wants me to hate myself. Then loving my body becomes political.

Part of the reason having sex with other trans women was important to me early on was that it helped me come to love my own body, too. Seeing them and their body however it was — pre-op, non-op, post-op, whatever — as beautiful helped me see my own body as beautiful, too.

In the very first, newsprint edition of “Our Bodies, Ourselves” in 1971, we wrote about our initial efforts together: “We were excited and our excitement was powerful. We wanted to share both our excitement and what we were learning. We saw ourselves differently, and our lives began to change.”

Now, 42 years later, we honor the authors of “Trans Bodies, Trans Selves” for expanding this excitement, this learning, and this crucial work for social change. Huge congratulations from us to you on the book’s publication. We look forward to reading it, to using it, and to sharing it with our loved ones.

Period Poverty is a Human Rights Issue. Period. by Guest Contributor August 6, 2021 by Hannah Sachs-Wetstone What is period poverty? Let’s talk about period poverty. Period poverty occurs when menstruators cannot access the menstrual products, underwear, and pain medication they need to maintain their menstrual health due to a variety of factors, such…
Stopping Keystone: A Victory for Native Women’s Health by Guest Contributor July 1, 2021 By Hannah Sachs-Wetstone In early June, after more than ten years of conflict, the Keystone XL oil pipeline project was halted by TC Energy, the company behind the project. This is a victory for Indigenous communities and environmental activists. However,…
In the Fight Against HIV, Gendered Assumptions Have Deadly Consequences by OBOS August 19, 2021 By Charlotte Babbin In October 2019, the FDA approval of the new HIV-prevention drug Descovy was met with great excitement by doctors, HIV researchers, and many people at risk of HIV infection. Descovy functions as a pre-exposure prophylaxis (PrEP), medicine…