Menu
Home > Our Impact > Our Bodies, Our Blog > These Underwear are Trying to Make Managing Your Period More Sustainable

These Underwear are Trying to Make Managing Your Period More Sustainable 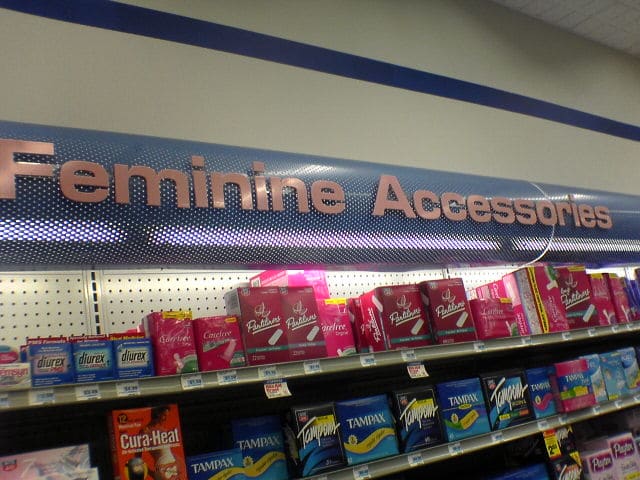 Photo of the pad and tampon aisle of a store by le jonez/flickr
By Miriam Zoila Pérez | PUBLISHED: December 23, 2015

Handling monthly menstrual flow is clearly not a new phenomenon. I remember first reading about the mysterious sanitary belts mentioned in Judy Blume’s “Are You There God, It’s Me Margaret”–the menstrual management tool of choice before self-sticking pads were invented in the 1970s.

While pads and tampons themselves have gotten lots of tweaks in the decades since — new shapes, new sizes, supposedly new super absorbent materials — there haven’t been any major changes in the industry in quite a while.

Now a new company has come up with a new and simple concept: underwear for your period. THINX uses a simple tagline: “underwear for women with periods.” At face value, not such a revolutionary invention. Who doesn’t have those few pairs of underwear with stains that get stowed away until the red visitor comes calling again? But the underwear made by THINX is meant to replace pads, or even tampons, as your method of period maintenance.

The company says the underwear, which comes in six different styles, is made of fabric that can absorb up to two tampons worth of liquid at a time. Instructions for use say the underwear should be rinsed by hand, and then machine washed cold and hung up to dry.

Read about other ways to manage your flow ->

So far, the reviews have been overwhelmingly positive.

On the environmental front, this could be a huge step forward. Disposable pads and tampons are an incredible source of waste. From Forbes:

Then there is the added factor that many of the tampons and pads we use are made with questionably safe chemicals and plastics.

Menstrual cups have long been an alternative source of sustainable period management, but most users report that they do occasionally leak, requiring some sort of back-up protection. Those reusable cups in combination with these underwear might be the perfect sustainable-period combo.

Thinx has also joined the bandwagon of “buy one, give one,” and is donating money to an African company that provides reusable pads to girls without access to menstrual supplies.

But THINX isn’t the only company trying to shake up the menstruation industry. A new high-tech menstrual cup just raised $160,000 on Kickstarter, promising to create “the world’s first SMART menstrual cup” which will sync with your phone and tell you when your cup needs emptying.

If you’ve tried THINX, leave us a comment and let us know what you think!

Period Poverty is a Human Rights Issue. Period. by Guest Contributor August 6, 2021 by Hannah Sachs-Wetstone What is period poverty? Let’s talk about period poverty. Period poverty occurs when menstruators cannot access the menstrual products, underwear, and pain medication they need to maintain their menstrual health due to a variety of factors, such…
Stopping Keystone: A Victory for Native Women’s Health by Guest Contributor July 1, 2021 By Hannah Sachs-Wetstone In early June, after more than ten years of conflict, the Keystone XL oil pipeline project was halted by TC Energy, the company behind the project. This is a victory for Indigenous communities and environmental activists. However,…
Persistent and Pervasive: Feminists Take on Toxics by Judy Norsigian December 7, 2020 For a variety of reasons, including gendered work and home experiences, women face different environmental health risks than men. Women are more likely to use personal care products, cosmetics, and cleaning products, and therefore more likely to face daily exposure…