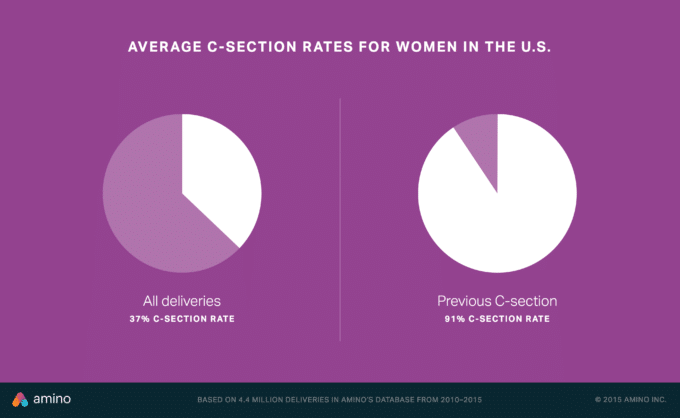 Today about 1 in 3 women give birth by cesarean section. While some cesareans are necessary and even life-saving,  in most situations, spontaneous vaginal births are safest for both women and babies.

It turns out that this last item — finding out the cesarean rates in different hospitals — is more difficult than it sounds. In 2007, we posted a round-up of where to find the most recent data. Lucky for us, and you, there is a website created since then, by blogger (and OBOS contributor) Jill Arnold, that maintains a collection of statistics about c-section rates by state and facility. It includes rates for all states except District of Columbia, Georgia, Hawaii, Idaho, Kansas, Missouri and South Carolina, which Arnold says don’t publish data that can be used to calculate these rates. The site was updated in January 2015, and most of it is based on data from 2013. Arnold has charts for each state, which makes it easy to compare facility rates.

Another resource I found uses data from insurance claims to give even more specific c-section data. Amino, a for-profit company (funded by four venture capital firms) uses data to “create the clearest picture of American health care and connect everyone with the best care possible.” They launched just last month, after two years of working on their database, and are offering a few tools regarding c-sections. One is an interactive map that allows you to see the c-section rate of every zip code in the U.S.

Below is a snapshot of the areas with a c-section rate of a whopping 71 percent, which I made using the map. The larger circles indicate a higher number of births. 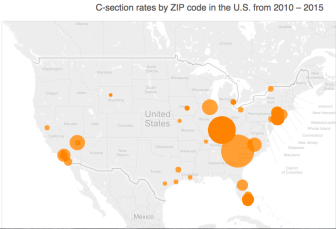 Unfortunately, if you are pregnant and want to avoid a c-section, knowing the rate in your zip code isn’t very helpful — unless you have the means to move to one of the zip codes with the lowest rate, like the 11249 zip code in Brooklyn, NY with a rate of just 5 percent.

Amino also has a c-section predictor tool, where you answer a series of questions about yourself, including where you live, your age and a few health questions, and it pops out the percent chance of you having a c-section. Below is the prediction I received when I answered questions about my (non-existent) pregnancy, but with real answers regarding health and age. 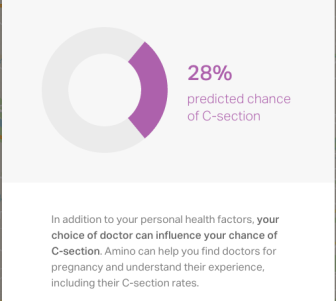 Then, finally, you can search for a provider in your area, and even see an assessment of how their c-section rate compares to your predicted rate. We have to remember, though, that this information is a statistical approximation, and one that has been adjusted based on the types of patients a provider sees. The detailed methodology is provided here, and the company rep I spoke to via phone explained that they are trying to be conservative in their approach when it comes to how they rank doctors. Every practicing physician in the U.S. is included, and no one can opt-out of the system.

They won’t disclose exactly where the data comes from, but they’ve used a variety of sources, and all of it stems from insurance claim information. The data for c-sections is based on “analyzing 4.4 million deliveries from 3.5 million distinct women in the United States over the last 5 years,” which they say is about 25 percent of the births that occurred in the U.S. during that time.

Why are cesarean rates so high? Read about the problems with maternity care in the U.S. ->

After spending a day or so poking around their tool, I can say that it there is nothing like it out there. Amino is a for-profit company, funded by venture capital firms, meaning that they expect there to be a way to monetize these tools, and monetize well. The company rep I spoke to said that they will be exploring a variety of ways do so, including selling insights from their data to other entities and adding bonus features that users might pay for.

Check out these two resources and tell us what you think in the comments.