Menu
Home > Our Impact > Our Bodies, Our Blog > Abortion Clinics vs. Cosmetic Surgery Centers: Which are Safer for Women?

Abortion Clinics vs. Cosmetic Surgery Centers: Which are Safer for Women? 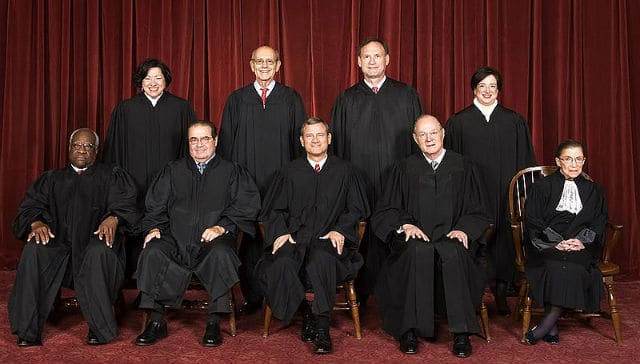 The Supreme Court of the United States, prior to Justice Scalia's death in February.
By Diana Zuckerman | PUBLISHED: March 4, 2016

The Supreme Court is trying to decide if regulating most abortion clinics out of existence places an undue burden on women’s access to safe and legal medical care. That is an important legal question, but I hope the Court will consider that the restrictive laws in Texas and several other states also raise important health questions that are unrelated to abortion or family planning.

If legislators really want to protect women’s health, I want them to know that they can protect many more women, including many of their friends and loved ones, from far more dangerous medical procedures. While approximately one in 1 million women who undergo abortions during the first eight weeks of pregnancy die from the procedure, one in 50,000 women are dying from other, more popular elective procedures in clinics and doctors’ offices: cosmetic surgery. These cosmetic surgery patients are at 20 times the risk of death.  Don’t they deserve protection?

Those numbers are staggering, compared to fewer than 1 million abortions, more than 20 percent of which involve pills rather than procedures.

Physicians tell us that abortion and cosmetic surgery are usually simple and safe procedures, but undergoing surgery always presents some risk. Cosmetic surgeons estimate that the invasive procedures and anesthesia involved in their procedures result in a death rate of one in 50,000 outpatient procedures. This translates to approximately 100 cosmetic surgery-related deaths per year. In contrast, approximately six U.S. women die from complications of a legal abortion per year, according to statistics from the Centers for Disease Control and Prevention.

Women who have abortions later in their pregnancies have a death rate higher than one in 1 million — approximately one per 29,000 during weeks 16 to 20 of pregnancy. While this is tragic, later-term abortions still have a better safety record than pregnancy and childbirth, which is fatal for one in 7,700 American women each year. And both are safer than liposuction, which is a fatal procedure for one in 5,000 women each year.

Given the higher death rate from cosmetic surgery and the much larger number of women undergoing cosmetic surgeries and procedures, why is it that the legislators in Texas and so many other states are so concerned about the safety of abortion clinics? According to abort73.com, an antiabortion website, there are about 1,720 abortion providers in the entire country. This number compares to more than 5,000 board-certified plastic surgeons, and thousands more men and women who perform cosmetic surgery but are not trained as plastic surgeons. (Here’s something for legislators to consider: Any doctor or dentist in the U.S. can call him- or herself a plastic surgeon and perform surgery on any patient, without telling the patient that he or she was not trained as a surgeon.)

A plastic surgeon in Michigan recently wrote about the “Wild West” of plastic surgery, explaining that since plastic surgery is a lucrative business, “an increasing number of doctors are closing their traditional medical practices and opening cosmetic surgery centers. These physicians learn the basics of plastic surgery through weekend courses, shadowing other doctors and even online webinars.” He explained that their procedures are performed in doctors’ “in-office operating rooms or at ambulatory surgery centers, where the credentialing requirements may not be as strict.” He concluded that “this influx of poorly trained cosmetic surgeons” has resulted in terrible cosmetic outcomes such as women with breast implants in their armpits and one woman with “shark-bite-sized divots all over her thighs and stomach after undergoing laser liposuction.”

Regulations can protect our health, but they need to make sense. Requiring hospital-style facilities for early abortions and not for cosmetic surgery just doesn’t.  I think the comparison between abortion clinics and cosmetic surgery spas and clinics is enlightening. It would seem hypocritical for the Texas legislators not to do something about this, as Texas women undergo many more cosmetic surgeries and procedures than women in almost any other state.

I wonder if the Supreme Court will consider the implications of regulating abortion clinics while not regulating the much more dangerous cosmetic surgery clinics, as they consider whether the Texas law is intended as a safeguard for patients or a way to restrict women’s legal rights.

Diana Zuckerman is president of the National Center for Health Research.