Menu
Home > Issues & Impact > Our Bodies, Our Blog > Maternal Health and Rights Deserve Their Own Day

Maternal Health and Rights Deserve Their Own Day

This post is part of a blog carnival. Mothers, activists, healthcare professionals, and researchers around the world have come together to ask the U.N. Secretary General to recognize April 11 as the International Day for Maternal Health and Rights. Please join by using #IntlMHDay

Without rights to safety and bodily autonomy, women may be prevented from carrying and raising children whom they dearly wish to nurture.

Without laws guaranteeing women’s right to choose when or when not to be mothers, they may be forced to endure pregnancies that endanger their health and well-being.

Without rights to clean water and air, adequate nutrition, and stable housing, women may enter pregnancy already in poor health. Women whose health is compromised are more likely to suffer miscarriages, complications during birth, low birth-weight babies, infections during the postpartum period, insufficient milk, and heightened rates of maternal and child death.

Without rights to paid maternity leave women may not have the financial resources to properly nurse infants or allow their bodies to heal after childbirth. And without access to appropriate, respectful, and high quality health care, mothers may become too weak, tired, discouraged, or sick to advocate for their rights and for the rights of their children.

Maternal health in the United States — to be blunt — is not good. The U.S. ranks 61st in maternal health standards, by far the worst rank among all developed countries. And among 25 of the wealthiest capital cities surveyed around the world, Washington, D.C. has the highest infant mortality rate, with babies from the District’s poorest wards dying at much higher rates than the city’s already high average.

The United States lacks a system of universal health care access. Although the Affordable Care Act (Obamacare) has expanded Medicaid eligibility for women and men living in about half of the states, local governors and state legislatures in the other half of the country have refused federal money to expand Medicaid in their states. Especially in the states that did not expand Medicaid, women may find that they get healthcare coverage temporarily while they are pregnant. This means that women’s health may not be optimal going into the pregnancy; there may be delays in prenatal care because they cannot afford to pay for the doctor visit to “prove” pregnancy; or that their eligibility ends too soon after birth or miscarriage. This sort of policy conveys a clear message that women’s health is not important in and of itself, but only insofar as the woman’s body is a baby-carrier.

Kim (all names used in this post are pseudonyms), a young Illinois woman, worked hard to balance college and her job. Though she managed to support herself, she could not afford health insurance:

I also tried to apply to public aid for a medical card [Medicaid], but they were telling me I have to have a child. They said that’s what I need in order to get help through the system. They make me think that they’re stupid, because, I mean, you have people out here like me with no kids and trying to go to school and trying to do the right thing, and I think we should also be helped. I was like, “Child, are you serious?!”

In quite a few states, the eligibility threshold for Medicaid is more generous for children than for adults. In these states, babies and children may be are eligible for healthcare coverage even when their mothers are not.

Jamie, a married woman in her early thirties, was diagnosed with gestational diabetes during her first and only pregnancy. The Illinois doctor told her that gestational diabetes put her at risk of developing type 2 diabetes later on. Her son was born with special needs, so Jamie left her job to stay home and take care of him. She and her husband were able to arrange Medicaid coverage for their son, and her husband was covered through his job, but the household income was too high by a couple hundred dollars a month for Jamie to be eligible for Medicaid. However, their income was too low for them to afford to pay for her as a dependent on her husband’s insurance. Jamie did have a few good years during which she would get her blood sugar tested at free health fairs held at churches and parks. Today, she has full blown diabetes.

The absence of a comprehensive healthcare coverage system creates a dangerous roller coaster for women.

For example, Alisha, who lives in Mississippi, had her tubes tied shortly after she gave birth. The reason for this, Alisha explains, is that the doctor encouraged her to get her tubes tied while she was still entitled to Medicaid by virtue of the pregnancy. A few months later, when she began menstruating, she experienced profuse bleeding. By this time, however, her Medicaid eligibility was over and she was not able to afford a medical assessment or treatment. “It started with the heavy, heavy bleeding and the days lasted longer,” Alisa explains, “And then it started with it going longer and longer into periods being heavier and harder for me. Sometimes I just lie on the floor and push real hard until it’s time and then get up and get on the toilet and then the blood clot comes. So I have periods like that now.”

Mothering in the Shadow of the Correctional System

The health challenges faced by low and moderate income American women are exacerbated when they are caught in the correctional system. The United States has the highest incarceration rate in the world – and the gap between U.S. rates and those of the next most incarcerating countries are even higher for women than for men.

At this time, more than one million women are under the control of the United States correctional system. Most of these women are mothers of minor children and the majority of these mothers lived with their children before entering jail or prison.

According to the Center for Investigative Reporting, doctors sterilized as many as 148 women inmates in California prisons during the five year period from 2006 to 2010. Women can be shackled during labor or delivery in most U.S. states. Incarcerated women struggle to obtain routine prenatal services, and the majority of newborns are separated from their incarcerated mothers immediately following birth.

Kristin from Massachusetts went to prison for the first and only time in her life immediately after giving birth to her second child. (The state kindly allowed her to wait to start her sentence until the baby was born.) At her request, her married brother and his wife took custody of her eight-year-old son and her newborn baby. Shortly afterwards, the brother and his wife found it difficult to cope with behavioral problems the older boy began to exhibit when his mother was taken away. At Kristin’s initiative, the department of Social Service (DSS) placed him with foster parents who seemed well able to care for the boy. A year later her son was placed with a single man in his forties who has asked to adopt the boy. Kristin is suspicious of his motives in wanting to adopt a ten year old with special needs and cannot understand why the Court feels that he is a preferable parent to her – even after she finished serving her sentence for a nonviolent crime. There is no record, evidence, or even accusation that she ever abused or neglected her children, and the boy desperately wants to come home with his mother.

With all of this going on, Kristin found out that she was pregnant. This was an unplanned pregnancy, for at 41 years of age she thought that her childbearing years were over. By the time Kristin was able to see a doctor, who showed her ultrasound images of the fetus, she felt that she could not have an abortion. The various lawyers and social workers involved in her custody cases are outraged at her decision to continue the pregnancy, seeing it as “irresponsible.” Caseworkers have threatened that by going through with this pregnancy rather than having an abortion, she will “lose any chance” of regaining custody of her other children.

Kristin’s loss is not a rare event. Across the country in Idaho, a friend watched Child Protective Services rip a baby from the arms of a woman who had just given birth. This woman’s child was taken from her because her drug use was seen as a danger to her children. “She asked for help,” her friend explains, “She failed her drug first test, but passed every one since. She is clean and committed to staying that way.” To make matters worse, CPS deemed the woman’s family members as unacceptable to take the child because they do not live in the same state. She has no money for a decent attorney and is looking at a hard road ahead. “Today I will watch them rip her three-year-old son from her arms too,” her friend says, “The baby was born with no drugs in the system. A perfect healthy 7 pound 3 ounces bundle of love. I’m sad and mad today.”

I share both the sadness and the anger. If there were any evidence that removing children from mothers like Kristin actually benefited children or mothers, I might feel differently. But children put into state foster care systems tend not to do well: they typically move from placement to placement, each time switching schools, doctors, and caregivers. They are more likely than other American children to be overmedicated with cocktails of psychotropic prescription medication. And while some mothers may respond by trying as hard as they can to stay off drugs and to jump through every hoop demanded by every caseworker and judge involved in the case, some mothers become so despondent that, as one mother who lost her children told me:

After that happened I just gave up. When I had my kids, I admit, I sometimes used [drugs] but I always kept it under control – just small amounts on a Friday night, never in front of them, never got so high that I didn’t take care of them. But once they were gone I was off and running. There was no reason to try [to refrain from drug use] anymore. I stopped taking care of myself. I never cried so much in my life.

Around the world maternal health is constrained and encouraged by both formal and informal social institutions. In the United States, mothering increasingly has become a matter of legislative policy and judicial control. The lack of universal healthcare coverage, narrowly limited coverage for pregnant women, abortion restrictions, mass incarceration, prosecution of women for prenatal harm, removal of children from mothers who use drugs, welfare (TANF) limitations on childbearing, and the authority of family courts in child custody decisions are manifestations of a broad cultural consensus that the State has legitimate powers to decide what constitutes maternal health, who is entitled to health-enhancing conditions and services, and who counts as a good enough mother. 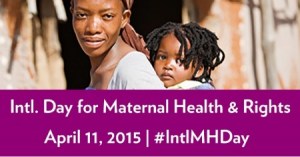 Click here to learn more about how to get involved in the movement to urge the UN to declare April 11 as International Day for Maternal Health and Rights.

If you live in Massachusetts, let your legislators know that you SUPPORT HB 1382: An Act to Provide Community-based Sentencing Alternatives to for Primary Caregivers of Dependent Children Convicted of Non-violent Offenses. If you live in other states or countries, find out about — or initiate — similar legislative efforts.

Click here to learn about or to donate to Families for Justice and Healing.