Menu
Home > Our Impact > Our Bodies, Our Blog > #MillionsMissing Protest: Highlighting an Illness Whose Toll is Unseen

#MillionsMissing Protest: Highlighting an Illness Whose Toll is Unseen 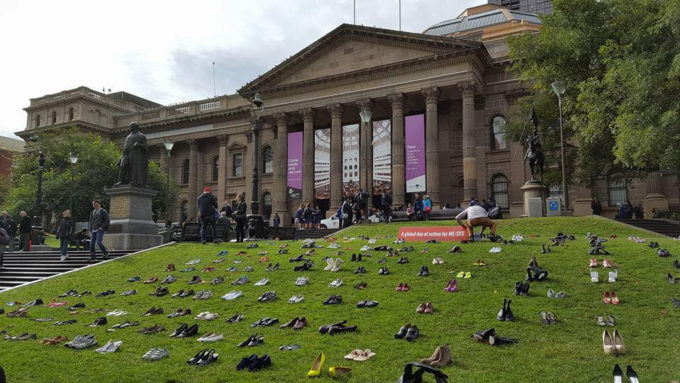 Between 836,000 and 2.5 million people in the U.S. — and millions more around the world — suffer from a disease with no known cause, no unified definition, and no existing cure. Even its name is contested. Currently called ME/CFS, Myalgic Encephalomyelitis/Chronic Fatigue Syndrome can cause debilitating symptoms in those who are afflicted. It’s not an exaggeration to call this a forgotten disease.

Today a global protest called #MillionsMissing hopes to call attention to the major gaps in funding for research, in doctors’ knowledge, and in public education that compound to the suffering the illness brings. According to the website of #MEAction, the organization behind the day of protest:

#MillionsMissing is dedicated to the millions of Myalgic Encephalomyelitis (ME) and Chronic Fatigue Syndrome (CFS) patients missing from their careers, schools, social lives and families due to the debilitating symptoms of the disease.  At the same time, millions of dollars are missing from research and clinical education funding that ME should be receiving. And millions of doctors are missing out on proper training to diagnose and help patients manage this illness.

Protests will happen in cities around the world, from Washington D.C. to Belfast. A virtual protest is also planned for the many who are too sick to join in person.

There are some things we do know about the disease. We know that the average age when a person gets sick is 33, and that more women than men are ill. We know that those diagnosed with ME/CFS are usually Caucasian, while some studies suggest that it’s more common in minority groups. We know that the majority of people with ME/CFS have a “sudden onset,” meaning that they are perfectly fine one day, develop some sort of acute flu-like illness, and then simply stay ill. And we know that the majority of people with the disease have not yet been diagnosed. In fact, many people struggle with symptoms for years before being diagnosed.

We know the symptoms most sufferers endure: fatigue so profound it impairs the ability to carry out normal, daily tasks; “post exertional malaise” (when symptoms worsen after physical, cognitive or emotional effort); unrefreshing sleep; cognitive impairment; and symptoms that arise or get worse when a person stands up which can only be improved by lying back down. Some people also experience pain. At least one-quarter of those with ME/CFS have been bed-bound or home-bound at some point during their illness.

Brian Vastag, a science reporter whose story of living with ME/CFS was chronicled in The Atlantic in a larger story about ME/CFS last year, describes it this way:

“You wake up one day with a bad flu and it never goes away. Ever.”

For others it feels as wretched as living with late-stage cancer or congestive heart failure.

For many reasons, including that there is currently no uniform marker of the illness that shows up in lab tests, health care providers too often misunderstand or dismiss the symptoms and concerns of patients with ME/CFS. According to a 2015 report by an expert committee convened by the Institute of Medicine (IOM), Beyond Myalgic Encephalomyelitis/Chronic Fatigue Syndrome: Redefining an Illness, many health care providers “mistake it for a mental health condition or consider it a figment of the patient’s imagination.” In other words, for years women and men have headed to the doctor wilting under the weight of a complex, chronic illness only to be told they must be depressed or that it’s simply psychosomatic.

It is no coincidence that an illness that predominantly affects women is far too often blamed on the woman herself — historically, time and again, women with poorly understood illnesses have been told that their symptoms are all in their heads.

The Institute of Medicine report also includes a recommendation to change the name of the illness. It’s no small issue. For many, the name Chronic Fatigue Syndrome reflects a belittling or trivialization of the disease. It also promotes a serious misunderstanding of the disease that clearly can contribute to misdiagnoses. The name the committee suggests is systemic exertion intolerance disease (SEID), chosen to appropriately reflect the illness’s most distinctive traits. While some have expressed concerns about it, until the illness is better understood, it will be difficult to reach consensus on the best name.

ME/CFS remains a mystery because of the distressing lack of attention and funding. The protest calls attention to the urgent need for understanding more about this disease that devastates the lives of millions of people. The NIH spends a measly $5 million on researching ME/CFS — hardly enough to paint a clearer picture of potential causes, progression markers, or treatment.

In an effort to address these critical needs, the demands of the protest are:

If you would like to join a protest in your city, visit #MillionMissing to see if your city is hosting one. If you’re a person with ME/CFS or can’t make it, you can protest from your home or bed, virtually, using these ideas. You can follow the #millionsmissing hashtag on Twitter, Facebook, and Instagram.  It’s past time to bring ME/CFS out of the shadows.