Menu
Home > Our Impact > Our Bodies, Our Blog > In June, Dig Deeper Into Abortion Access for Low-Income Women

In June, Dig Deeper Into Abortion Access for Low-Income Women 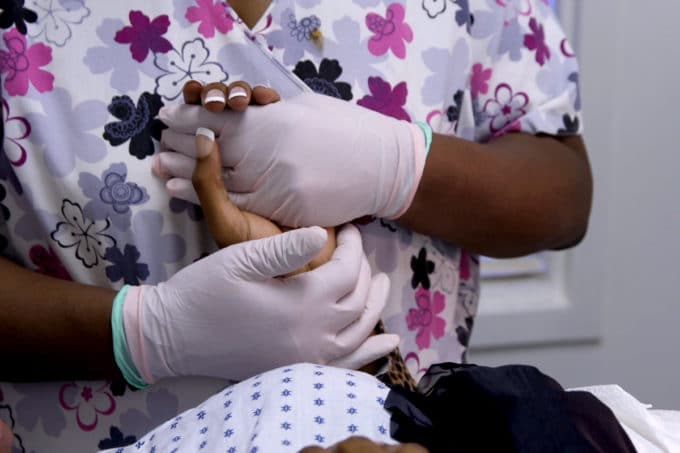 A nurse at Reproductive Health Services clinic in Montgomery, Ala. comforts a patient. Photo: "Trapped"
By Amie Newman | June 22, 2016

This month, two important discussions about abortion access and the impact of TRAP (targeted regulation of abortion providers) laws are happening in two very different spaces: one on PBS and the other in the Supreme Court.

TRAP laws, in a very small nutshell, block women’s access to safe, legal abortion care by forcing clinics that provide abortions to make prohibitively expensive and unnecessary renovations and by mandating that physicians who provide abortions at these clinics have admitting privileges at nearby hospitals.

“Trapped,” a documentary airing this week on PBS’ Independent Lens (available to stream on PBS through July 20 and more than worth the 80 minutes of your life to watch), looks at how abortion clinics are (or aren’t) surviving as they battle the onslaught of harmful state TRAP laws. It’s one of these laws — HB2 in Texas — that the Supreme Court is now tasked with either upholding or overturning in Whole Woman’s Health v. Hellerstedt, set to be decided this month.

On the surface, the Supreme Court case and the film examine how these anti-choice regulations affect clinic closures. “Trapped” focuses on Texas and Alabama, two battleground states where legislators have enacted so many TRAP laws that clinics are effectively being regulated out of business. Dalton Johnson, the owner of Alabama Women’s Center for Reproductive Alternatives, shares in the film that that there are only five doctors who provide abortions to serve all women in the state of 4.8 million people. If the law at the center of the Whole Woman’s Health case is upheld, it will result in ten of the remaining 17 abortion clinics in Texas being shut down.

Dig a little deeper, though, and you unearth the ways in which these laws sharply impact women at the lowest rungs of the economic ladder.

In the film, a lawyer with the Center for Reproductive Rights, the organization defending Whole Woman’s Health in the current SCOTUS case, warns, “It’s increasingly becoming the case that women’s constitutional rights are being determined by their zip codes.”

I’d add that as women’s constitutional rights are being determined by zip code, so is women’s health. What happens to low-income women when abortion clinics disappear?

This is what happens: anywhere between 100,000 and almost one-quarter of a million women between the ages of 18 and 49 in Texas are estimated to have tried to terminate a pregnancy without medical assistance, according to a University of Texas survey, writes Olga Khazan in The Atlantic last year. When we restrict access to abortion, we do not stop women from accessing abortion. We prevent women from accessing safe abortion care.

The authors of the University of Texas survey also report:

In other words, women need safe reproductive health care and we continue to endanger their health and lives when we take access away. Women’s lives are harmed in multiple, intersecting ways by these laws. The more low-income women are stripped of their access to this critical reproductive health care, the more difficult it is for them to move up the income ladder and escape poverty. We’ve seen the way the Hyde Amendment, which targets low-income women by restricting federal funding for abortions for women receiving Medicaid, has laid the groundwork for this further gouging of low-income women’s rights.

In many states where the number of clinics and abortion providers are dwindling, women must travel longer distances to find a provider. This often forces them to miss work days. Women in Texas are especially hard hit, where the average county is now 111 miles from the nearest abortion clinic, writes Kim Soffen in the New York Times Upshot blog. When a woman is forced to travel to access safe, legal abortion care, it often entails many forms of expensive transportation, hotels, and childcare as well. For women who have money, these barriers may not be insurmountable. But for the two-thirds of women who make up minimum-wage workers in this country, these barriers often force them to bear unwanted children or attempt to self-induce an abortion.

We need to continue to push for abortion access laws that respect and value women as agents of their own lives  – like the mother of two in the film, interviewed at the clinic where she is scheduled to have an abortion, who says she’s doing the best she can caring for her two young sons and does not feel she can give another one the same kind of attention. We need laws that care for vulnerable women’s bodies —  like the fourteen-year old girl who was gang-raped and waits anxiously behind a closed exam room door, preparing to have a safe, legal abortion, even as she’s never even had a pelvic exam. Laws that respect all women’s choices as they make them, even if they are different than what we would choose for ourselves — like in the film, where the mother of two wrings her hands and pleads, “We need to stop judging women for the choices we make for ourselves.”

Watch a clip from “Trapped”: