Menu
Home > Our Impact > Our Bodies, Our Blog > World Breastfeeding Week: Are We Doing All We Can to Support Mothers?

World Breastfeeding Week: Are We Doing All We Can to Support Mothers? 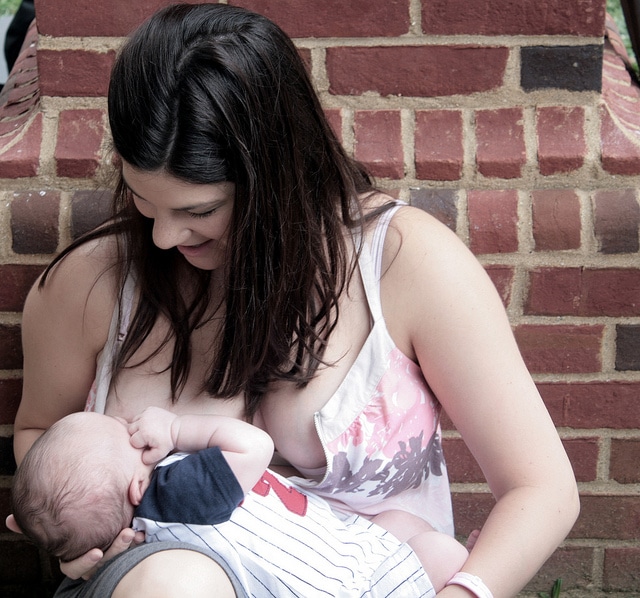 It’s been seventeen years since I sat on my bed, crying, holding my two-week-old son while feeding him formula from a bottle, wondering why I wasn’t able to make breastfeeding work. It’s been eleven years since I reticently stopped breastfeeding my then three-year old daughter, my second born. Both experiences helped me understand how hard and how fulfilling breastfeeding can be.

But breastfeeding is powerful. It provides the ideal balance of nutrients for babies and nurtures the relationship between mothers and babies. Breast milk helps protect infants from common childhood illnesses and breastfeeding seems to reduce the chances that a woman will develop breast or ovarian cancer, among other benefits. Best of all, breast milk is readily available and cheap.

The risks of not breastfeeding are much greater in developing countries, where breastfeeding can actually increase babies’ chances of survival by protecting against diarrhea and pneumonia. But even in the United States, babies who breastfeed seem to have a lower risk of getting ear infections and asthma, and of developing type 2 diabetes later in life.

Despite this, only about two-fifths of infants worldwide are breastfed until six months of age. According to the World Health Organization, “If every child was breastfed within an hour of birth, given only breast milk for their first six months of life, and continued breastfeeding up to the age of two years, about 800,000 child lives would be saved every year.”

That’s why the Centers for Disease Control (CDC) aims to increase breastfeeding rates in the United States, and organizations including the World Health Organization (WHO) strive to do the same, globally. The American Academy of Pediatrics (AAP) and the WHO recommend that women in the U.S. breastfeed for the first 12 months of a baby’s life, and breastfeed exclusively (feeding your baby nothing but breast milk) for the first six months.

But most women in this country, for a variety of reasons, don’t actually do that.

Although the CDC and AAP work to increase breastfeeding rates among all women, the disparities along racial and ethnic lines are important to understand and address. The question of why black women do not breastfeed at higher rates is not a simple one to answer. The CDC has identified a number of factors involved, including, “social and cultural norms, social support, guidance and support from health-care providers, work environment, and the media.”

But those reasons may gloss over other issues, including a lack of diversity in the lactation field and breastfeeding’s connection to the legacy of female slaves forced to wet-nurse their masters’ babies. These are, in part, why Black Breastfeeding Week (August 25-31) was created four years ago.

A recent study by Chapman University on these differences found that black mothers were nine times more likely to be given formula in the hospital than white mothers. And since many community hospitals have profit-driven partnerships with formula companies, it’s not hard to see how this happens.

The ways in which hospitals address infant feeding has an impact on all women in the U.S. Breastfeeding can be difficult in the beginning. When women are not offered adequate information and support after childbirth, they often don’t start breastfeeding or stop early on. As of 2013, according to the CDC, only 26 percent of hospitals did not routinely feed formula to healthy breast-fed infants when there was no medical reason to do so. Just 32 percent of hospitals provided enough support for breastfeeding mothers when they left the hospital. Fortunately, the WHO/UNICEF Baby-Friendly Hospital Initiative in the U.S. is changing these statistics for the better. Now, 14 percent of U.S. babies are born in “baby-friendly” hospitals.

There are other ways in which society can make life better for nursing mothers who wish to or do return to work. For starters, federally mandated paid family leave in the U.S. and uniform policies that make allowances for women to pump breastmilk at work are important, so women who work outside the home are able to successfully balance parenting and supporting their families financially. Paid leave can contribute to an increase in the rate and duration of breastfeeding. A 2011 study in California found that women who had paid leave breastfed twice as long as women who did not take leave. According to the University of North Carolina’s Global Breastfeeding Institute, the relationship between the length of family leave and breastfeeding remains significant even after adjusting for education, income, and race, among other factors.

World Breastfeeding Week offers a perfect pause for us to reflect on how beneficial breastfeeding can be to the health and lives of babies and mothers. It’s also a chance to work with providers, hospitals, and governments to put in place policies that support women and babies from the moments following childbirth through the first year of life.