Menu
Home > Our Impact > Our Bodies, Our Blog > What the Standing Rock Resistance Can Teach Us About Reproductive Justice for Native American Women 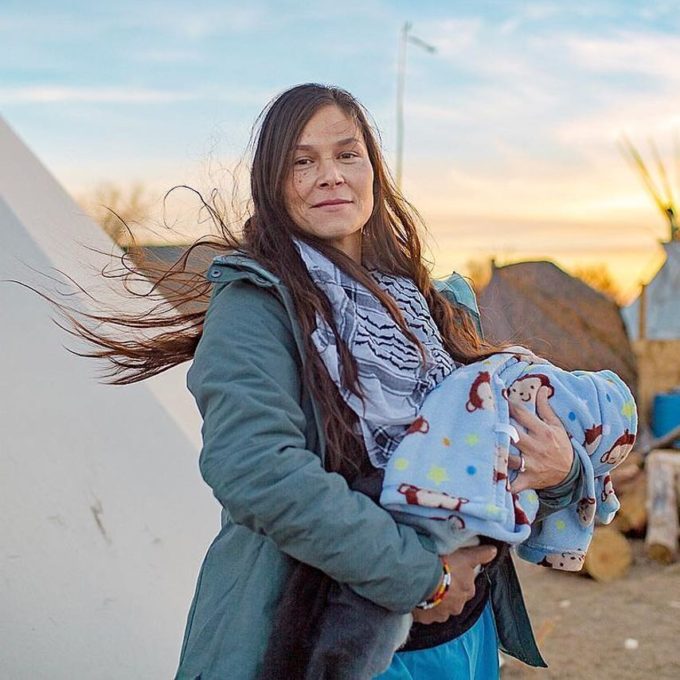 Last weekend, the Army Corps of Engineers announced they will halt construction of the Dakota Access Pipeline through Standing Rock Sioux tribal land and look for alternative routes. The decision, which came after months of protest by thousands of Native people and supporters, will at least temporarily protect the tribe’s sacred ground and clean water supply.

Although the fight is not over, the pause allows us to turn our attention to another crisis affecting Native people, one directly connected to the fight for their land and water: Native women’s access to reproductive health and rights. The danger may look different than the threat of an oil pipeline snaking through the land and contaminating the water supply. But the negative effects of the persistent lack of access to reproductive health care, to safe maternal care, and to contraception for Native women are just as real.

In October 2016, the first baby was born at one of the unified collection of camps set up by Native people with the common goal of protecting the water from the Dakota Access Pipeline. The news was shared online by a group of Indigenous midwives who were at the camp. Three of those women, who had come to Standing Rock to offer reproductive health care to women at the resistance camp, spoke with Amy Goodman of Democracy Now! about the birth of the baby, and why reproductive rights for Native women is important to the fight for their land. One of the midwives, Carolina Reyes, explains their mission:

Zintkala Mahpiya Wi Blackowl gave birth to a baby girl while at the Standing Rock camp. According to Indian Country Today, the decision to have her baby at the water protector camps where people were actively opposing the construction of the Dakota Access Pipeline (DAPL) was a conscious one:

Having babies is my act of resistance; our reproductive rights as Native women have been taken away from us in so many ways. At one time, we were forcibly sterilized; assimilation has come down really hard on us.

In a blog post for Our Bodies Ourselves, Kathryn Krase explains more,

In many Native American cultures children are important for tribal survival. A woman’s ability to procreate is often seen as an important way for her to secure her place within her tribe. Sterilization abuse not only took away women’s rights to control their fertility, but negatively impacted their social and emotional health.

Native women have suffered a history of horrific discrimination at the hands of white people, especially when it comes to their reproductive health and rights, including forced sterilization. The weight of trauma carried in the bodies of Native women, passed down through generations, is heavy. And it continues. Approximately 34 percent of Native American women will be raped in their lives, a rate that’s almost twice the national average, and most of those will be at the hands of non-Native perpetrators. High rates of poverty and adolescent pregnancy contribute to an environment that does not support their bodily autonomy.

For these reasons, access to reproductive health care, including contraception and abortion services, is critical. Native American women are entitled to health care through Indian Health Services (IHS), provided through the federal government, and it is supposed to cover health care through a woman’s life: from birth through childhood vaccines to contraception, prenatal care, pregnancy and beyond. Unfortunately, IHS is chronically underfunded. American Indians and Alaska Natives who rely solely on IHS for care often lack access to needed care, including preventive care and early treatment of chronic diseases, according to the Kaiser Family Foundation.

More than 40 percent of Native women do not receive “adequate prenatal care.” Access to over-the-counter contraception has been a struggle. In 2013, two years after emergency contraception became available over-the-counter to most women in the United States and relentless advocacy on the part of reproductive justice organizations, IHS finally mandated its own facilities to provide access to Plan B. Geographic isolation also contributes to challenges in accessing care. Victims of sexual assault sometimes have to travel hundreds of miles to a hospital to receive a rape kit and screenings for sexually transmitted infections, notes Native American women’s health advocate Charon Asetoyer. And an important health care service isn’t even on that list: abortion.

The Hyde Amendment, a federal regulation which bars the government from using funds to pay for abortion care except in cases of rape, incest, or if the health of the mother is in danger, means Native American women who depend on IHS for their health care face many barriers to accessing safe and legal abortion care.

Native American cultures traditionally support and respect women’s autonomy with regard to reproductive health decisions. It is only since Native cultures were colonized by white people that traditional healing practices, particularly those led by women for women, become marginalized.

This is why the midwifery and women’s health clinic at the Standing Rock resistance camp is more than just a place to provide health care for women. It’s a symbol of deeply held Indigenous beliefs surrounding Native women’s strength and bodily autonomy. It’s an act of resistance, within a larger circle of resistance, connected and yet powerful on its own.

The women and men at Standing Rock put their lives on the line to protect the water and the land from further destruction by a white culture determined, it seems, to wipe out indigenous ways, beliefs, and lives. They succeeded in this hard-fought battle to keep a piece of the earth safe, for now. Native women who spoke up at Standing Rock and who took action to support women’s health at the camp offered insight to non-Native women about how their cultures view the powerful connection between women’s bodies and Mother Earth. All of us have an opportunity to build on the struggle and continue fighting for Native women’s right to bodily autonomy and reproductive health care in the United States.

As midwife Caroline Reyes shared with journalist Amy Goodman at the encampment,

You know, right now Native women — this space, in particular, creates the potential, the possibility, that women — that we can decolonize, not just through birth, but really come back to a place of matriarchy and respecting women in a way that we can also respect Mother Earth and not lay pipelines in her, not dig out her liver, her coal, just as they’re doing in Black Mesa, Big Mountain, Sovereign Dine Nation, just as they’re doing all across the world and across the globe.

And right now we’re here, but everywhere people are, in your home communities, find out who the Native folks are there that are living there. Find out what they’re battling. Find out what the battles are and how you can support them, because they are doing it for all of us, for all future generations, for all the babies to come.