Menu
Home > Our Impact > Our Bodies, Our Blog > Cable News Gets It Wrong on Abortion and Reproductive Rights

Cable News Gets It Wrong on Abortion and Reproductive Rights 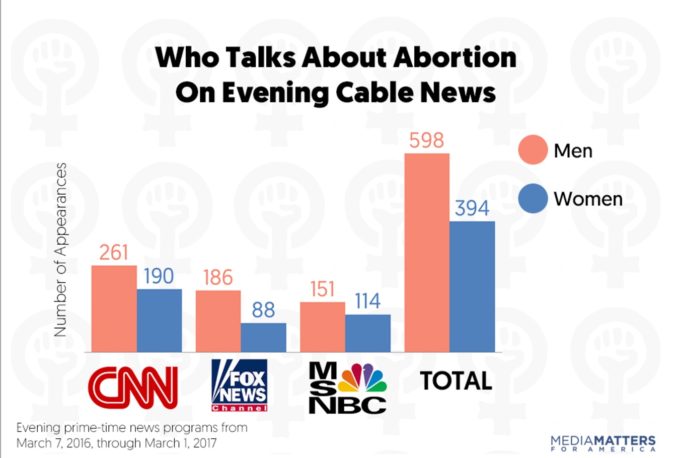 It may come as no surprise that TV news coverage of reproductive rights is often inaccurate or misleading. Now a new study, How Cable News Keeps Getting It Wrong About Abortion And Reproductive Rights, shows us that misinformation and reproductive rights go hand-in-hand on many cable news shows.

During the 12-month study, undertaken by the nonprofit research center Media Matters, researchers found that across all evening news shows on MSNBC, Fox News, and CNN, the majority of information (64 percent) about reproductive rights — from news about Planned Parenthood to information about late-term abortion — was wrong.

The researchers studied TV segments that featured discussions of abortion or reproductive rights and then looked at mentions of the election, legal issues, religion, anti-choice violence, economic and logistical barriers to abortion access, and state-based legislation. They also listened for and recorded the number of accurate or inaccurate statements speakers made about the Center for Medical Progress (the group that fueled the false narrative that Planned Parenthood was selling fetal tissue and whose leader now faces felony charges related to the false story), abortion funding rules (which are notoriously reported incorrectly), Planned Parenthood’s essential services, and late-term abortion.

It will likely shock no one to hear that Fox News was the biggest purveyor of misinformation. In one year, 80 percent of the abortion-related news and information on Fox was inaccurate. MSNBC and CNN, networks, considered more left-leaning or mainstream, had fewer instances but still provided inaccurate information on abortion and reproductive rights 47 percent (MSNBC) and 38 percent (CNN) of the time.

Researchers also found that coverage of reproductive rights was “dominated by men”: sixty percent of the hosts, guests, and correspondents, across all of the networks, were men. When you look only at who hosted the segments, the numbers are even worse: 80 percent of them were men.

It’s not that a man is unable to speak accurately about these issues, of course. And the study did not address whether men were more likely than women to give inaccurate information or to cover different aspects of reproductive rights. Yet the fact that the majority of people addressing abortion and reproductive rights issues on these networks are men and the majority of the information they provided was inaccurate is disturbing. The people who can get pregnant and whose health and lives are most impacted by restrictive laws and policies that roll back reproductive rights are the least likely to have their voices heard.

Fox News had the most stunning record. On some of the Fox programs that featured discussions on abortion and reproductive rights, it was all men all the time: host, guests, correspondents. This isn’t just a conservative media problem, either. While Brit Hume and Tucker Carlson on Fox News hosted zero female voices discussing reproductive rights, MSNBC hosts Chris Hayes, Lawrence O’Donnell and Chris Matthews featured a majority of men as well.

On programs where the hosts are female, however, there are more female guests. On CNN, the only program hosted by a woman (OutFront, by Erin Burnett) featured women guests 64 percent of the time. Similarly, on MSNBC, the Rachel Maddow Show and For the Record with Greta had fewer male guests when the discussion focused on abortion: 10 percent (only 4 guests) on Rachel Maddow’s program and 25 percent (1 guest) on For the Record with Greta.

There are other issues with the way the networks covered abortion issues as well. The research found that when abortion was discussed, it was most often discussed in the context of the presidential election and the candidates’ positions on abortion access; Trump’s position was covered most frequently. After that, coverage was most commonly related to abortion and reproductive rights in the courts.

The least covered topics, especially on CNN and Fox News, were those topics that center and focus the actual experiences of people who get (or need and can’t get) abortions and people who provide abortions. According to Media Matters, “In contrast to coverage of the legal battles over abortion access, there was very little coverage on any network of either anti-choice violence or the consequences of making abortion inaccessible.” CNN and Fox News had almost no coverage of either of these issues. MSNBC led the coverage about barriers to abortion access (almost half of those aired during The Rachel Maddow Show and the rest were evenly divided among Hardball with Chris Matthews, All In with Chris Hayes, and The Last Word with Lawrence O’Donnell).

When it comes to a particularly challenging reproductive rights issue — late-term abortion — all cable news networks were complicit in the spreading of misinformation. It’s a topic that the right-wing media regularly mishandles. It uses meaningless phrases and coded terms to refer to deeply personal and sometimes complex situations for women and their families. That’s why Media Matters looked for “misleading anti-choice terms,” including “partial-birth” abortion, “sex-selection” abortion, “abortion on demand,” and “abortion until the moment of birth” (unfortunately, the US president uses similar inaccuracies to talk about late-term abortion). The research found that across all of the networks, the topic was reported on inaccurately a whopping 88 percent of the time.

One bright spot in the research? The study found that most of the information shared about Planned Parenthood’s “essential health care services” (cancer screenings, pap tests, referrals, wellness exams, contraceptives, STI tests, family planning, and LGBTQ health services) was accurate — except, of course, on Fox News.

This kind of inaccurate coverage allows abortion stigma to thrive and misinformation to fester. You only have to listen to real women discussing why they needed or chose late-term abortions, for example, to understand how important it is to present honest stories and accurate information. When cable news programs push false information about late-term abortion, refuse to speak to the very people for whom this right matters the most, and don’t address the impact of restrictive laws and policies on people’s actual lives, it has serious consequences for women’s health.