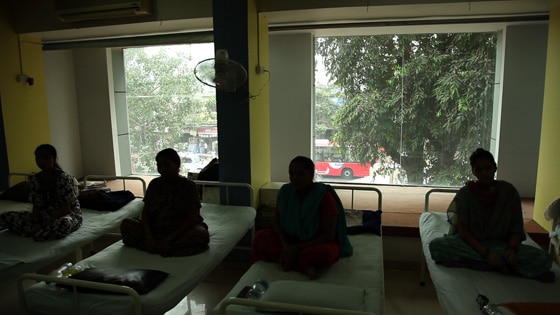 Sreenshot from the documentary "Can We See the Baby Bump, Please?", which explores questions and concerns surrounding cross-border surrogacy in India.
By Ayesha Chatterjee | PUBLISHED: September 21, 2017

From widely accepted in vitro fertilization to recent (and more controversial) “three parent” babies, assisted reproductive technologies are rapidly evolving. Their advancement, however, has come at a cost. While these technologies offer important options in family formation, the related practice of commercial surrogacy continues to evade public scrutiny with astonishing agility — and, generally, at the first whiff of regulation. As a result, surrogacy hubs – countries where gestational mothers (also known as surrogates) can be easily and cheaply hired within unregulated markets – pop up and out of sight in the blink of an eye.

International commercial surrogacy came  into the limelight in 2006, when Oprah Winfrey invited Jennifer and Kendall to share their journey to parenthood on her popular television talk show. At the time, commercial surrogacy was legal in India (the couple’s hub of choice) and accounted, by one estimate, for 25 percent of the country’s multi-billion dollar industry in medical tourism. Its advanced and inexpensive healthcare, weak oversight, and abundant(ly) disenfranchised women made the country lucrative recruiting ground for gestational mothers. It was also a cautionary tale, one that took a twist when bad press and pressure from watchdog organizations (such as OBOS’s partner Sama) forced the Indian government to take a stand. Between the ART Bill (2010) and the Surrogacy Regulation Bill (2016), surrogacy in the world’s largest hub received a swift (financial) gut punch: foreign intended parents were barred from hiring Indian gestational mothers and surrogacy is now restricted to citizens that are heterosexual and married.

While Indian legislation morphed, other neighboring countries stepped up to the plate: Nepal, who shares a fairly porous border with India, and Thailand, a short flight away. Neither played long. As agents and clinics relocated services and intended parents redirected travel, two events caused a stir: in Thailand, his Australian intended parents rejected Baby Gammy because of Down Syndrome; and nature had her way in Nepal, resulting in a post-earthquake evacuation of Israeli intended parents and their surrogate-delivered babies. In the resulting global outcry – at one abandoned baby and many gestational mothers – lawmakers scrambled and the chips eventually fell. With caveats, Thailand banned commercial surrogacy in 2015 and Nepal followed in 2016. Yet, again, the fertility clinics and agents barely missed a beat. Cambodia rose to the challenge, as the “last hope” for intended parents, before the government, citing human trafficking as one concern, issued a ban.

While it took years for India to impose restrictions, and other governments are beginning to strike quicker, the law always seems to be in chase. Is it possible to get out, and stay out, in front? Can we predict new hubs before they emerge and waylay the service sector with appropriate regulation before it runs amok? Possibly, if we pay attention to the early signs.

Vietnam, for example, was expected to gain traction after Cambodia. In a preemptive strike, the Vietnamese government may have tweaked the country’s Marriage and Family Law to allow only altruistic surrogacy, but is this enough? OBOS’s partner in the country is skeptical about the existing law’s ability to prevent commercial surrogacy. Khuat Thu Hong, founder of the Institute for Social Development Studies, an independent research organization in Hanoi, says Vietnam is an “ideal place for international commercial surrogacy because the technology is improving, the cost is low, prenatal care and delivery services are good, [and the] supply of donors is accessible.” And earlier this year, a man in Laos was arrested for smuggling in vials of semen bound for fertility clinics in the country, opening the door to yet another hub.

As Vietnam and Laos, and others like Myanmar and Malaysia, wait in the wings, let’s pay heed to India and Hong.

In our next blog, we will share her insights on a region poised to fill the gaps in the wake of bans in India, Nepal, Thailand, and Cambodia; the implications on gestational mothers and their movement across porous borders (most recently to Thailand, before the ban); and the relentless search for new recruitment pools, as reports emerge of domestic workers being sought for their services as gestational mothers. We hope you will tune in — and stay tuned over the coming months as we continue to give chase, spotlight hubs, and highlight issues within the global and unregulated business in human reproduction.