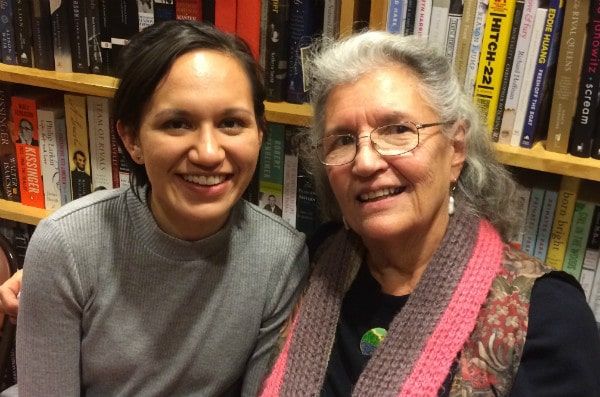 My friend Norma is 85 years old. I am 23. On the day we first met, while working on the same OBOS committee, we sipped lemonade in the hot sunshine, and an hour-long meeting turned into three. It’s like that every time we’re together.

Norma and I connect as if we met on the crest of second-wave feminism, writing the ERA or celebrating Griswold v. Connecticut in 1965. Despite the years between us, our relationship has developed as we’ve worked on projects, shared meals, and watched movies. Together we took part in the Women’s March and attended the annual Civil Liberties and Public Policy conference at Hampshire College – and felt revived by the energy and diversity of activists of all ages. She is my mentor by necessity and friend by choice. This is our story about how we met and the issues that concern us both.

NORMA: On the day of our meeting, I searched for the most interesting-looking young woman at the coffee shop. You were my first choice, seated at a sidewalk table. We exchanged glances, and that was all. Suddenly we figured out we were meeting. I think we talked about ages a bit, and I remember you saying, “Sometimes people say I have an old soul.” I loved that remark.

As we talked, I felt an instant rapport, though several generations lay between us. In a way, I was meeting a great-grandchild and feeling very much at home as I learned more about you. I knew we would be friends, and though nobody talked about mentoring at first, I think we both knew it would happen.

MELANIE: The first time we met, you told me about an old myth that I can’t stop thinking about. People once believed they could make condoms from Saran Wrap!

NORMA: Kids practically never learn anything about sex or sex education from their parents, so where else are they going to learn it? It’s not offered in school. What was offered to me in school was oatmeal at a buffet. After that, you turn to your peers, and myths begin developing that actually inform people’s decisions.

MELANIE: Today, we have some of the same myths, as well as new myths, like IUDs causing infertility, that are propagated on the internet. Those really searching for an answer are online because they don’t want to ask parents or guardians about sex. So myth-busting is just one reason why we all need feminism.

NORMA: Each generation is vulnerable to different myths and fears, depending on media and education.

MELANIE: Would you agree that today it’s harder to get people behind feminism?

NORMA: Yes, I think it is harder. The first thing to do is to make feminism a dirty word; the media did that with the help of a lot of conservative forces on the right. But then you have to factor in the abortion struggle. If you look at the decades spent raising money and demonizing anybody who has anything to do with it, this became the face of feminism. That was – and is – a serious and continuous blow to feminism.

MELANIE: I think that abortion is still the face of the feminist movement among young women, because it is easy to grasp, at least in terms of legislation.

NORMA: A confluence of things made it easier for women to identify as feminists during that earlier time. It became a fashionable way of distinguishing oneself from the other women around you. And it was an honorable thing. And it’s now been tarnished quite a bit. And I would say it’s been tarnished in selective memory, because older people were taught to fear and punish “communism” or “socialism,” so feminism took its place as yet another “ism” to be suspicious of.

MELANIE: I think that the narrative of how the “Our Bodies, Ourselves” books evolved, and how the special topic books came to be, really highlight an important element, which is time. And that’s something I think about a lot, because I worry that younger women will miss the boat when it comes to becoming activists in the feminist movement. They’ll sort of look at the history that has come from the first and second waves, including Supreme Court cases such as Roe, and even Whole Women’s Health, and think, “Wow, we’re here. We’ve arrived at equality and now we’re done.” Does that fear resonate with you?

NORMA: Sure, except of course it’s only the beginning. Until it actually happens to you or someone you know, it’s just an abstraction, almost like in the olden days. I think if anyone has paid the slightest attention to the abortion crisis in this country, they’ve got to see that it doesn’t matter that there’s a Roe v. Wade, if there are people out there that are going to see to it that women can’t get abortions.

We need real stories. Can we restore stories about why woman have abortions? Can we give them prominence once again? Can we make teaching tools of them? Can we change the dialogue? This is an intergenerational question from an old lady.

MELANIE: To realize that you aren’t alone, for one thing, is seriously important and healing, but for movement’s sake it’s about numbers and strength. So I certainly think that sharing stories in an intergenerational space, as we are, will illustrate that these problems, along with sexism and misogyny, span the lifetime. And that’s reason to get involved and to fight it.

NORMA: I think I have been very privileged in having an all-girl education with amazing role models, but I have especially learned from the generations of young women coming up behind me. My finest education has come from women leaders I have met all over the world, more than half of them younger than me, and also learning from students. And I don’t want to leave men out. Without quite a few male mentors willing to be that, many women of the second wave could hardly have accomplished what they have done.

MELANIE: For somebody like me, who is on the other side of the tunnel just getting my bearings and beginning my journey as a feminist, I’m wondering how caring so much about this and devoting my time and a lot of my thought to it is going to affect my life. Last time we spoke, you used the term “deeply felt identity” and that’s what living as a woman is for me — deeply felt. How will centering my life about this one thing affect me?

NORMA: I can only tell you what Margaret Mead said decades ago about development of young people — and let’s call it all development, because with any luck you’re not done developing. It depends on the adults you meet, on the people you meet.

What you may find, if you are fortunate, is that a lot of people with whom you may have relationships will become less and less compatible. More and more, you will be drawn to thinkers who are trying to illuminate the mysteries that people don’t want to talk about, or uncover the things that seem to need uncovering; they value honest discourse. So, it’s really going to be a combination of losses of identification in mainstream culture, if you’ve had that —

MELANIE: Yes, I’ve had that!

NORMA: — and gains in being part of progressive forces, of which there are many. If you’re part of a vibrant network of people who really believe that things can and should be better — and in fact will be better, because it’s not just what you do but what you all do together — then it’s a way of life.