Menu
Home > Our Impact > Our Bodies, Our Blog > “Our Bodies, Ourselves” in Luganda: Changing the Course of Ugandan Women’s Health and Rights

“Our Bodies, Ourselves” in Luganda: Changing the Course of Ugandan Women’s Health and Rights 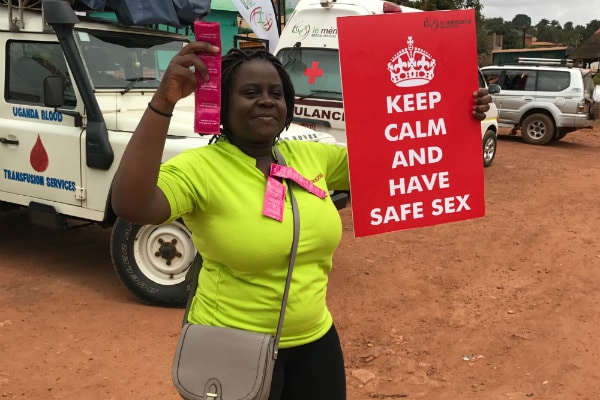 I first met Diana Namumbejja Abwoye, now a nurse practitioner student at Boston’s Simmons College, in 2013. With her soft voice and unassuming manner, she quizzed me about OBOS’s partnerships with women’s organizations that adapt “Our Bodies Ourselves” to their unique cultural, social, and political realities. I listened as she described her intent to do the same for her native Uganda. 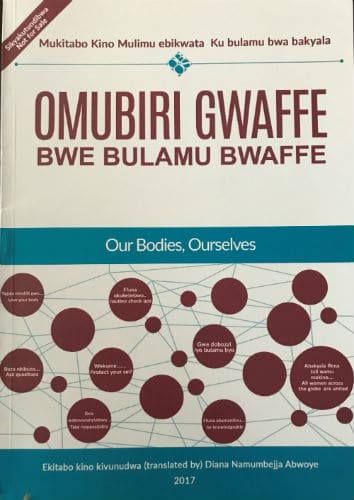 Cover of the Ugandan adaption of “Our Bodies, Ourselves”

Four years later, she has succeeded. A print booklet in the Luganda language, “Omubiri Gwaffe Bwe Bulamu Bwaffe” (“Our Bodies, Ourselves”), was published this year and is available on the OBOS website. This resource focuses on issues related to sexuality, birth control, safer sex, and childbirth — issues, Diana knows, that women and girls face every day.

As a young girl growing up in Uganda, Diana has vivid memories of cultural rules and ambiguity related to sex and sexuality. Young people were discouraged from having sex and therefore were not provided any information on preventing pregnancy and STIs. Yet, sexual activity was often assumed and punished.

“At the beginning of each school term and sometimes during, they randomly took girls to the school clinic and checked for pregnancies,” she said. Pregnant girls were expelled from school. Her cousin was one of them: She died at the age of 18 after an illegal abortion.

“I always thought if someone had told her about being safe,” said Diana, “she would still be here.”

As she travels back and forth to Uganda, working on HIV-related outreach with women and girls, especially mothers, Diana is now on the frontline of education and prevention efforts that will finally increase access to information she — and others like her — did not have in their youth.

“Our current situation,” she said, “makes it even more critical that women are equipped with information that will enable them to take part in decisions affecting their lives.” The Ugandan parliament is trying to enforce a stricter dress code for women — yet another attack on women, in a country that scores poorly on indicators related to their health and human rights.

According to the World Health Organization, the teen pregnancy rate in Uganda is among the highest in sub-Saharan Africa. Women and girls are also disproportionately affected by HIV — adolescent girls being four times more vulnerable than adolescent boys. The prevalence among adult women is 7.5 percent compared to 5 percent of men. Cultural mores related to gender are partly to blame, including that married women are unable to refuse sex or ask their partners to use condoms, alongside strict taboos on talking about any of it.

According to Diana: “Some women, particularly those in villages, fear asking questions pertaining to their health. They also have limited medical access. Culturally, women do not discuss sexuality, sex, and birth control with their daughters. Daughters who are lucky will discuss it with their paternal aunts.”

She intends for “Omubiri Gwaffe Bwe Bulamu Bwaffe” to fill this gap, as the go-to resource for women and girls.

As one of the (two) faces behind OBOS’s Global Initiative, I frequently field requests like the one Diana made four summers ago. I also know that adaptation projects can be grueling — from the resources they demand to the issues they tackle — and take seriously my role to vet requests and support our global partners. Listening to Diana, I was left with no doubt: She was going to pull it off.

In 2011, as a pre-med student at the University of Massachusetts in Boston, she attended OBOS’s 40th anniversary symposium and received a copy of  “Our Bodies, Ourselves” from girlfriends. The book changed her life.

“I knew I had to produce this Luganda translation of some of the book’s content so that other women and girls from Uganda could benefit as well,” she told me.

The Luganda resource went through changes typical to many adaptations — changes that OBOS wholeheartedly encourages. Diana incorporated slang commonly used by Ugandan women, along with their experiences. For example, in reference to HIV, Ugandans refer to condoms as “bugalimpitawa” or “where would it pass to get to me.” She intentionally used this cultural term — over other generic language — to help women negotiate safer sex with resistent partners who believe condoms have no business in marital relationships.

She also sidestepped points of conflict. For example, due to cultural proscriptions and the need for broad-based support and use of the publication, some content related to the LGBTQ+ community was omitted. But she still managed to include information on sexual self care for same sex couples, to ensure their safety.

“I believe they also deserve to know how to care for themselves and keep their lives safe,” she said.

Another modification is the cover. It carries affirmative messages for women, but is designed to conceal the nature of the information inside, to prevent the book’s outright rejection by those who object to its content and violence against the women and girls who use it.

None of this was easy, though, due to the secrecy and scrutiny attached to the issues — because of it, Diana said, some organizations have chosen to distance themselves from the material.

Readers, however, have received “Omubiri Gwaffe Bwe Bulamu Bwaffe”  with open arms, speaking to the longstanding gap and thirst for the information it provides, and the team behind it is optimistic about its reach and impact. OBOS is proud to partner with this tenacious and visionary group of activists — Diana Namumbejja Abwoye, editor Florence Namukabya, and reviewer Laureen Ndagire — and play a small part in their journey to return power to Ugandan women and girls.