Menu
Home > Our Impact > Our Bodies, Our Blog > Art Not Just For Art’s Sake

Art Not Just For Art’s Sake 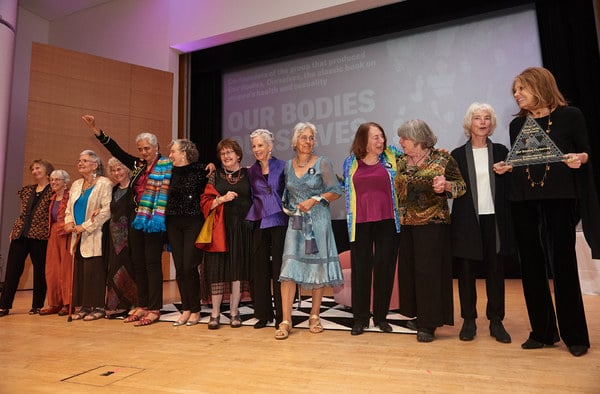 There are many extraordinary people among us. In October, the Sackler Center for Feminist Art at the Brooklyn Museum celebrated some of them, at its first-ever Brooklyn Conference, “Art Inspiring Social Change.” OBOS’s founders were among those honored at the YES! gala preceding the conference, for their game-changing contribution to women’s health action: “Our Bodies, Ourselves.”

The two-day conference that followed was inspirational in its vivid exploration of the connections between art and social justice. Speakers included national artists, such as rapper Tariq Trotter (aka Black Thought) and filmmaker Paola Mendoza on the ubiquitous role of creativity in culture, as well as local change catalysts like The Laundromat Project. Others bridged national and local, grassroots and institutional. Neera Tanden, from the Center for American Progress, along with artists Hank Willis Thomas and Marc Bamuthi Joseph, helped unpack what artists and policy-makers can learn from each other. U.S. Senator Kirsten Gillibrand, (D-NY), acknowledged in her keynote speech that she only recognized the severity of sexual abuse in the armed forces after someone “handed her a film” — that film being “The Invisible War.”

Gillibrand’s admission comes as no surprise. For artists and activists working on social change, including organizations like OBOS, art is a tool for public education, empathy, and engagement. It transcends language and geography to touch people with something they may never experience or witness; and, as conveyed by our panel, it can also be timeless.

In the session “Advocacy Through Feminist Filmmakers,” moderated by OBOS’s executive director, Julie Childers, OBOS founders and staff teamed up to talk about three films that reflect ongoing social and political concerns: “Abortion,” founder Jane Pincus’s 1971 film on race, class, and the stigmatization of abortion before Roe; “Sorceress,” founder Pamela Berger’s 1987 film about a medieval woman healer persecuted as a heretic by a Dominican friar; and “Can We See the Baby Bump, Please?” by Sama, OBOS’s partner in India, on the unregulated business of international commercial surrogacy.

“Can We See the Baby Bump, Please?” has been central to the work OBOS is doing with its partners to increase public awareness on the health risks and human rights violations within international surrogacy arrangements. It exemplifies art’s transcendence over culture and language via its portrayal of women who are hired to carry and birth children for others. One does not have to be familiar with commercial surrogacy to understand the health risks, including those related to medically unnecessary cesarean sections, or to be outraged by the physical confinement and social isolation of women who serve as gestational mothers or surrogates. (Visit OBOS’s website Surrogacy360.org for more.)

The two other films illustrate the endurance of certain issues: Abortion is still a dividing point in the United States, while access to this legal procedure is constantly under siege, and women healers are still pitted against modern medicine, while women, more often than men, are accused of good old-fashioned sorcery. 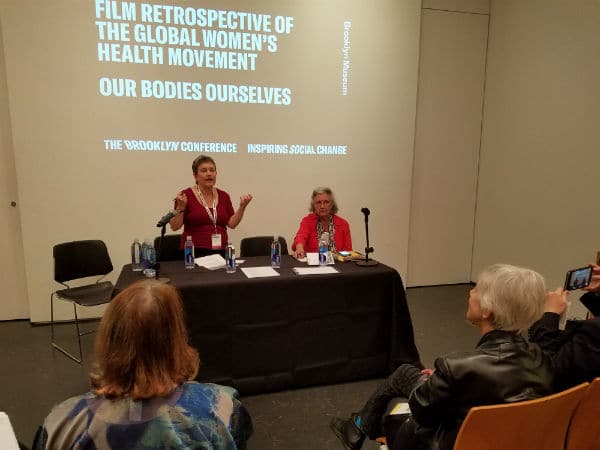 Similarly, OBOS founder Norma Swenson, speaking on a different panel about the 1982 documentary “La Operacion,” noted it still rings true. While “La Operacion” delves into U.S.-imposed sterilization abuse in Puerto Rico during the 1950s and 60s, a quick search online reveals countless reports of ongoing forced sterilization in many countries, including India.

In her comments as panel moderator, Childers emphasized the need to use art responsibly and responsively to address current issues. As these concerns persist across generations or return after hiatus, art (and technology) are key to how information can be effectively offered and consumed. To succeed, however, we need collaboration between those that create and those that advocate.

Planned Parenthood, for example, recently got together with Nonny de la Peña (hailed as “The Godmother of Virtual Reality” by Engadget and The Guardian) to create “Across the Line.” This virtual reality film places viewers in the middle of terrifying and cruel harassment faced by people that seek abortions. Not suitable for all audiences, it is a must for those that have never walked into a Planned Parenthood clinic and struggle to understand the experience. It is, to paraphrase Judy Chicago, creator of “The Dinner Party,” art that does not speak in tongues. Neither does Jane Pincus’s film on abortion — or the other pieces featured here and at the Brooklyn Conference. Together, they re-imagine art not for art’s sake, but as a thrust for social change.