Menu
Home > Our Impact > Our Bodies, Our Blog > Cervical Cancer Prevention: What You Can Do

Cervical Cancer Prevention: What You Can Do 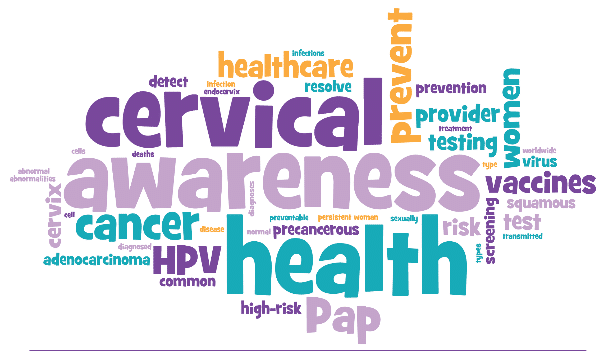 by Gary A. Richwald, MD, MPH

January is Cervical Health Awareness Month. More specifically, January 21-27 is Cervical Cancer Prevention Week, and for good reason: nearly 13,000 women in the United States are diagnosed with cervical cancer each year, and more than 4000 of them will die from it. Luckily, this form of cancer is now largely preventable. Women can take steps to reduce their chances of contracting human papillomavirus (HPV), a widespread virus that can cause pre-cancerous changes in the cervix.

How Does Cervical Cancer Form?

Cervical cancer is caused by high risk types of HPV, the most common sexually transmitted infection in the United States. Almost half of American adults ages 18-59 have had a genital HPV infection. This doesn’t mean that everyone who has HPV will also contract cervical cancer. For younger women, their immune system is likely to clear up the infection on its own. However, women between the ages of 30 – 64 who have a “high-risk” form of the virus (hrHPV) are at greater risk. This is because, over time, a persistent hrHPV infection can cause changes in the cells of the cervix. Without treatment, these changes can develop into precancerous cells and then cervical cancer.

There are several effective ways to prevent or reduce your risk of getting cervical cancer. Some involve lifestyle changes, while others make use of vaccines and testing.

To reduce your risk of contracting HPV:

Because prevention strategies are not always completely effective and because the vaccines are relatively new, the Centers for Disease Control and the United States Preventive Services Task Force recommend that women are screened regularly for cervical cancer.

There are two different kinds of tests available: the Pap test and a HPV test. The Pap test (also known as a Pap smear) looks for cell changes on the cervix that might become cancerous if they aren’t treated. The HPV test looks for HPV infections that cause these cell changes.

Both of these tests can be performed at a health clinic or a doctor’s office. The HPV test can also be performed at home, with at-home testing kits. At home kits, which are produced by several different companies including myLAB Box and Nurx, may be particularly helpful for women who live in rural and poor areas.

Have a Pap test alone every 3 years.

You have three different options for screening:

2. Do hrHPV testing alone every 5 years.

3. Have a Pap test in combination with hrHPV testing (cotesting) every 5 years.