Menu
Home > Our Impact > Our Bodies, Our Blog > Congress Wants to Give Companies the Right to Own Our Genes

Congress Wants to Give Companies the Right to Own Our Genes 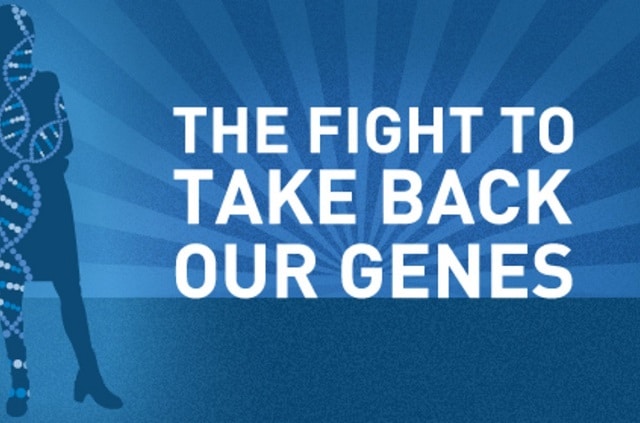 Six years ago, on June 13, 2013, the U.S. Supreme Court in AMP v. Myriad took a great step forward for women’s health by unanimously ruling that human genes could not be patented. Now a bipartisan group of Senators and Representatives have released a bill that would allow companies to own our genes once again.

Article 1 of the U.S. Constitution provides that any patent system must “promote progress in science and the useful arts.” But patents on genes do not promote the progress of science. In fact, they impede it. Such patents also run afoul of over 150 years’ worth of U.S. Supreme Court holdings in which, as the Court pointed out, “the laws of nature, physical phenomena, and abstract ideas have been held not patentable. Thus, a new mineral discovered in the earth or a new plant found in the wild is not patentable subject matter.”

Patents are supposed to be granted on inventions, not on naturally-occurring substances.  We don’t want someone to be able to patent air and charge us each time we breathe. Yet, by the time the Court heard the Myriad case, companies managed to patent thousands of human genes. They hadn’t “invented” the genes. They’d just found them in nature — in people’s bodies.

Since a patent holder can control any use of its “invention,” gene patent holders used their power to prevent any other doctor or lab from analyzing or doing research on the gene. Prior to the Supreme Court ruling in 2013, Myriad, the company which held breast cancer gene patents, used that power to threaten other labs with multi-million dollar patent infringement suits if they even looked at a woman’s breast cancer gene. That’s how Myriad was able to charge $3000 for a test that could be performed for a fraction of that price. Every woman who wanted her breast cancer gene tested had to send her blood or tumor to Myriad to be tested. Even if another company invented a better test, it couldn’t be used since anyone looking at the breast cancer gene in any way infringed Myriad’s patent. Women who were told they had a mutation in their breast cancer genes had to make a painful decision about whether to have their healthy breasts surgically removed to prevent cancer — but they couldn’t get a second opinion before the operation.

That’s not only bad law and bad ethics, but it’s bad for science and medicine.

When a non-profit foundation and the American Neurological Association wanted to finance research to find a cure for a particular genetic disease, researchers were unwilling to undertake the work because of the potential for legal action against them by the holder of the patent. SARS research was slowed down because of concerns about the patents on the genetic sequence of the SARS organism. Researchers at Yale, U.C.L.A, and the University of Pennsylvania were forced by gene patent holders to stop their research on various genetic diseases.

One study found that 53% of genetics labs had stopped doing research due to concerns about gene patents. Another found that 49% of American Society of Human Genetics members had to limit their research due to gene patents. Moreover, once a biotechnology patent is granted, there is a chill on future research using the patented information, including a statistically significant decline in scientific publications using the patented information.

Gene patents also deterred people from participating in medical research. In a study of potential research participants, 32% said they would be offended by the patenting of products of research with their DNA.

And think about the costs to the consumer. A person’s whole set of 20,000 genes can now be sequenced for $1000, providing the consumer with information to help her avoid disease or select appropriate treatment. But, when genes were allowed to be patented, the patent royalty was $2000 for just one gene. Who could afford $2,000 times 20,000 — $40,000,000 — in royalties for sequencing their genes?

Stop Congress from commercializing the building blocks of life. Add your voice to that of the ACLU and over 150 other civil rights, medical, scientific, patient advocacy, and women’s health organizations who submitted letters opposing the proposed amendment to Section 101 of the Patent Act.

Lori Andrews is a Distinguished Professor of Law at Chicago-Kent College of Law, Illinois Institute of Technology, and the former chair of the federal advisory committee advising the Human Genome Project on the ethical, legal, and social implications of genetics.  She filed an amicus brief on behalf of medical organizations in AMP v. Myriad.