Childbirth author and activist Sheila Kitzinger died April 11, 2015, at the age of 86, just a month before the publication of her autobiography, “A Passion for Birth: My Life: Anthropology, Family and Feminism.” Norma Swenson, a founding member of Our Bodies Ourselves who knew Sheila well, wrote this remembrance.

The Boston Association for Childbirth Education-Nursing Mothers’ Council and Our Bodies Ourselves are hosting a memorial celebration of Sheila’s life and work on Wednesday, May 27, from 4 to 7 p.m. at the Newton Highlands Congregational church. All are welcome.

Come, gentle night, come, loving, black-brow’d night, give me my Romeo; and, when he shall die, take him and cut him out in little stars, and he will make the face of heaven so fine that all the world will be in love with night and pay no worship to the garish sun.
– Shakespeare, “Romeo and Juliet”

Long before I met British anthropologist Sheila Kitzinger, I read her words and marveled at their power. After discovering her first book, “The Experience of Childbirth” — we regularly smuggled the Canadian edition across the border in the mid-60s, years before it was published in the United States in 1972 — I knew what needed to happen: We had to get Sheila to Boston to share her message.

Sheila was one of the first “lay” women in the 20th century to write and publish in English her own experience of childbirth. (American Marjorie Karmel, who wrote “Thank You, Dr. Lamaze” in 1959, arguably may have been the first.) Until then, all we had were stories and advice from doctors, nurses and midwives.

Their versions of what the experience was truly like – physically, emotionally and psychologically – formed the dogma that childbearing women measured themselves against. We were all admonished not to listen to our own mothers or indeed to any women who had given birth.

Sheila pushed back against the medicalization of birth and advocated for listening and learning from women. Though the medical view insisted that listening to other women’s experiences was neither “modern” nor scientific, she taught us that our stories matter. In order for women to make the best choices for themselves during pregnancy and childbirth, they first need to know all of their options.

Even if it was not spoken — and often it was — the ghost of “old wives” (read: midwives) tales would be called to mind. It would be more than a decade before British sociologist Ann Oakley would explain to us, in her remarkable book “The Captured Womb: A History of The Medical Care of Pregnant Women” (1984), why we had no other options.

It was just as important, we thought, for as many CEA groups as could manage it to invite Sheila to visit their organization’s cities. In the end, I believe she traveled to a dozen more cities across North America after the Boston conference. In Boston, and everywhere she went, Sheila was a sensation.

Sheila’s personal charisma made the difference — she was a vivacious, enthusiastic and forthright being. Her training as an actress showed when she spoke into the microphone or began to work the crowd. For both the men and women who came to see her, the simple experience of being in her presence or hearing her speak was breathtaking. She was so powerful and mesmerizing, so poised during questions, that we in Boston invited Sheila back again in the fall of 1969 for a series of workshops and meetings with psychiatrists and other doctors.

Sheila went on to publish more than three dozen books about childbirth, midwifery, breastfeeding, sexuality and related issues surrounding family life. She is the most prolific woman to write on these subjects in the English language, and she saw most of her books translated into more than a dozen other languages.

It is amazing to realize that there are millions of women who turned to Sheila’s words to support them in a life transition. She made readers feel as though she spoke directly to them, knew how they felt, and understood how they wished things might be different.

Whenever a new guru appeared on the scene with a new book or theory, Sheila would soon take him to her historic Standlake home in the county of Oxfordshire. There she introduced the expert to the women who were working so hard to bring about the very changes these experts seemed to be wanting, after all. She brought midwives to Standlake, too, from all over the world.

For decades, Sheila was nearly as well known in the United States as she was elsewhere. Her non-stop schedule included lecturing, hosting workshops for community groups and hospitals, and speaking before medical and nursing schools. She went on TV, gave news-making interviews, organized campaigns and traveled extensively. When Sheila spoke from a platform, she told fabulous stories and often included an attention-getting physical performance of some kind. For those of us involved in the movement to reclaim childbirth for women and to reform maternity care, Sheila was our first “star” — and now, perhaps our only real star ever, forever.

I did not see Sheila often. We were both so often on the road, somewhere else in the world. But over the years I would join the family from time to time abroad during summer vacations, and I gradually got to know the five amazing daughters who now embody their parents’ legacy, each in her own different way. While Sheila’s husband, the economist Uwe Kitzinger, was at Harvard for a decade, we drew him in to our community here and kept the links going.

When BACE decided to hold a 50th Anniversary celebration, there was no question who would give the keynote. So Sheila came back to Boston one more time in 2002. She donned her priestess robes, which thrilled everyone, and appeared more star-like than ever. We took her to Cambridge to support the midwives and the Birth Center, where she scared a few of the doctors. Most present had never heard a lecture even remotely like it.

But is that it, now? Shall we then turn her into stars and form a constellation in her image? As some who knew her have said, she cannot really die, because she is in our blood. But what of those who never knew her? How shall we explain that Sheila is part of our firmament? And, know it or not, she must now be part of theirs as well if they will do this work. 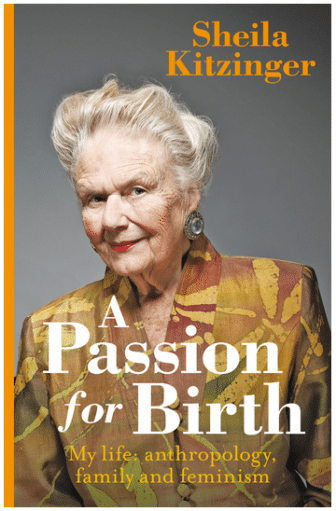 The biggest portion of her legacy is yet to be realized, perhaps, because most of us have yet to imagine the kind of autonomous personhood to which Sheila believed all of us to be entitled, as women and men — and not just some of us, or increasingly, only a few of us. We will all have to re-set the bar, and re-train our own vision, in her honor, if we hope to help others to see.

If anyone were to ask Sheila, I do not know whether she would say that the Birth Crisis Network she devoted herself to in the last decade of her life was the most important work she did. It’s not clear that there was ever a clearly defined starting point to the listening work. In a way, she really always did it. But what it was and is about is a far more profound kind of listening than most of us are trained, or gifted, to do. Her daughters now are continuing that work.

We all know that despite our very best efforts to prevent tragedy and cruelty from being what so many women experience during childbirth, that we cannot prevent all of it. So then it’s about healing, and without telling our stories there can be no healing.

This is the gift Sheila gave when she was done giving the gifts of her books and her public words, and all the diverse causes. It was her listening: deep, active and informed listening. Years ago, I, too, began believing that if only we could find the way or the time to listen, we could really help one another. One-on-one listening is a great and priceless gift, a form of devotion to the human spirit that has, I think, no real substitute.

Knowing that she gave that gift, and kept on giving it freely almost to the end, is one of the commitments Sheila made that perhaps I admire her for most. It’s a skill that can always be perfected, if only one practices. Like everything else she did, she gave it her very best.

Norma Swenson would like to thank sister co-founder Jane Pincus for her editing assistance.