Last month, NOW on PBS aired “Abortion Providers Under Seige,” a look at how the murder of Dr. George Tiller is affecting other abortion providers and whether violence against doctors who perform abortions should be prosecuted as domestic terrorism.

It was a straightforward, highly praised report — which means that PBS came under siege from right-wing groups. These groups tend to object — quite loudly — to factual coverage that raises important questions about their activities.

In response to the right-wing outcry, the Women’s Media Center sent an alert and created a letter that you can send to PBS, thanking the network for airing this important program and voicing support for NOW on PBS and Maria Hinjosa’s reporting.

You can watch the program online, and also check out additional features, such as a “Gallery of Rage,” featuring images from anti-abortion websites, and an online debate between Operation Rescue President Troy Neuman and reproductive rights activist and author Cristina Page.

*I’m late with announcing this action, but it’s not too late to let PBS know what you think. 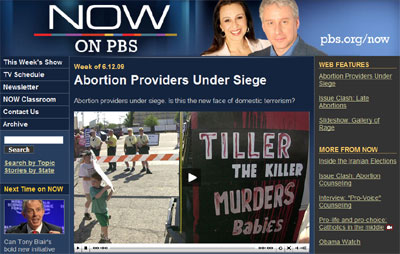