Apple recently announced it was joining Facebook in covering costs for female employees who opt to freeze their eggs for non-medical reasons.

Despite the financial generosity, this might not be a good deal for healthy employees of these companies — or for women in the workplace in general.

While some news outlets have addressed the high cost of egg freezing — at least $10,000 per ovarian stimulation cycle and $500 a year for storage — there’s more to be concerned about than the high cost or the low chances of success (according to the Society for Assisted Reproductive Technology, for a woman age 38, the chance of one frozen egg leading to a live birth is 2 to 12 percent).

We’ve pulled together a number of articles discussing the potential health risks and the complicated messaging to women employees. Please feel free to add what you’re reading in the comments.

Kicking things off, Pamela Mahoney Tsigdinos, who works in the venture capital and tech sectors and has tried (and failed) to conceive using assisted reproductive technologies (ART), observes that egg freezing is “far from settled science”:

First, most people don’t realize the American College of Obstetricians and Gynecologists and the ASRM do not endorse the use of egg freezing to defer childbearing. The ASRM’s decision to lift the ‘experimental’ label from this still young procedure in 2012 only applied to medically indicated need, such as women with cancer.

Second, there are no guarantees for a successful or healthy pregnancy and delivery. In order to attempt pregnancy, egg freezing must be followed by in vitro fertilization (IVF) with another laboratory procedure, a technique known as ICSI (Intracytoplasmic Sperm Injection). For the latest flash freezing process trumpeted by enterprising fertility clinics and a host of profit-driven service providers, the most comprehensive data available reveals a 77% failure rate of frozen eggs resulting in a live birth in women aged 30, and a 91% failure rate in women aged 40.

But the dry statistics don’t take into account the very real emotional strain and trauma that often accompanies artificial reproduction and their frequent failures. Silicon Valley celebrates success. Even business failure can be accepted as an opportunity to learn. But failure takes on a much deeper personal meaning when it involves parenthood expectations.

She adds more in this essay at Wired:

Fast forward many months or even years into the future. You now attempt to get pregnant with your frozen eggs. Hopefully you have sufficient savings, or are still employed by Facebook or Apple, because you must now undergo at least one, but probably multiple rounds of invasive and life-altering in vitro fertilization (IVF) procedures.

You must again inject yourself with hormones, this time to prepare your uterus to welcome a potential embryo. You must open your entire emotional, social and professional schedule to daily blood tests, ultra sounds, vaginal probes and other assorted procedures that experienced women have referred to as “humiliating.” I can attest to this.

If your uterus responds to the hormones, the frozen eggs must then be successfully thawed — no easy task given low thaw survival rates. An egg’s shell hardens when frozen in liquid nitrogen so to attempt in vitro fertilization sperm must be injected directly into the egg with a needle to fertilize the egg through a technique known as ICSI (Intracytoplasmic Sperm Injection).

Again, if all goes well and at least one viable embryo is created in the laboratory, it is then transferred into your uterus. As with naturally occurring conception, the final outcome is in Mother Nature’s hands — and she is clearly not incentive driven. The vast majority of procedures fail.

Ronald F. Feinberg, a reproductive endocrinologist, notes that physicians have a duty to “accurately inform our patients about the potential risks and benefits of all care we provide.” His 10 points about elective egg freezing cover success rates and other statistics along with health concerns:

For some women, egg retrieval can commonly cause mild internal bleeding and the potential for scar tissue formation around the ovaries and fallopian tubes. Egg donors are routinely told this could interfere with future natural conception by preventing an otherwise normal egg from entering the fallopian tube after ovulation.

For IVF patients who have already committed to bypassing their tubes via IVF, the concern about tubal scarring is not as high. But for women looking to electively freeze their eggs, the process could worsen their future chances of conceiving naturally.

Additional health risks are outlined by Françoise Baylis, Canada Research Chair in Bioethics and Philosophy at Dalhousie University. In “Seven Reasons not to Freeze Your Eggs,” she explains the potential complications related to ovarian stimulation, which takes place prior to egg retrieval:

The two weeks of daily injections are known to be painful and uncomfortable. There can be cramping, abdominal pain, nausea and vomiting. More serious possible side effects include rapid weight gain and damage to organs close to the ovaries. More serious still is the small risk of severe ovarian hyperstimulation syndrome which can require hospitalization and rarely has resulted in death. As well, there is a small chance of infertility (1%) and there are reports suggesting a link between ovarian stimulation and certain cancers.

Participating in The New York Times Room for Debate, OBOS board member Miriam Zoll, author of “Cracked Open: Liberty, Fertility and the Pursuit of High-Tech Babies,” notes that there is still much we don’t know about the procedure.

“Responsible doctors should not be recommending egg freezing to healthy young women who have no medically indicated need,” she writes, adding:

The dearth of evidence-based safety and efficacy data, combined with low numbers of live births resulting from egg freezing, do not justify broadening the application of the procedure to the general public at this time.

There is no long-term data tracking the health risks of women who inject hormones and undergo egg retrieval, and no one knows how much of the chemicals used in the freezing process are absorbed by eggs, and whether they are toxic to cell development.

Who Benefits the Most?

Writing at PBS’s To the Contrary, Zoll also explains that pressure to preserve fertility (for which egg freezing is not recommended) creates a lucrative system for the ART industry.

With a perpetual media and marketing blitz loaded with slogans like “extend your fertility,” “tackle conception later” and “take control of the calendar,” healthy young women who can afford it might assume they are being negligent if they don’t agree to “insure” their chances to become a mother in the future.

This fear is exactly what anthropologist Tiffany Romain has written about in the book The Anthropology of Ignorance. Like IVF, she says the egg freezing business­­ markets [offer] hope, and that hope often turns into a fantasy of “empowerment.”

Melissa McEwen also touches on the problematic idea of egg freezing being sold as something “empowering” for women employees. Her post “Egg Freezing: A Sign Your Workplace Is A Dystopian HellHole” concludes:

This is the kind of pretend woman empowerment that makes me cringe. But if there is anything I’ve learned working in tech for almost a decade, it’s that this is par for the course. That corporate feminism like “Lean In” (by Facebook’s COO) isn’t about making women’s lives better, it’s about increasing our productivity for the good of the company. And about making people in power feel good about themselves without actually threatening the status quo.

Encouraging women to freeze eggs sends a clear message that the corporate preference is for women to avoid childbearing — especially when the companies are overwhelming male-dominated like Facebook and Apple are (where about 70 percent of their total staff is male). Marcy Darnovsky, executive director at the Center for Genetics and Society, explains:

Controlling Reproduction in the Workplace

“Historically, the relationship between technology and women’s work has been complicated,” note the authors of “Egg-freezing a better deal for companies than for women,” posted at CNN.

All three bring a useful perspective and context to the discussion — Rene Almeling is a sociologist at Yale and author of “Sex Cells: The Medical Market for Eggs and Sperm”; Joanna Radin is a historian at Yale; and Sarah S. Richardson is a historian at Harvard and author of “Sex Itself: The Search for Male and Female in the Human Genome.” They write:

At the beginning of the Industrial Revolution, when wage labor was being regularized, workers were compelled (sometimes via force and sometimes via incentives) to show up on time and to order their lives along the expectations of their employers. The tech industry has reconfigured the places and even the hours that people work, but it still sets a very demanding pace.

What’s more, women now constitute almost half of all workers. And rather than making fundamental changes to the structure of work in our society to accommodate women’s reproductive years, technological optimists reach for an engineering solution. Have a conflict between women’s biological clock and work productivity? Freeze the eggs. […]

Freezing eggs appears to make reproduction controllable, but one cannot freeze time. Even if cells can be hoarded and stored, time cannot. Time and life and bodies march on; we age, even if our reproductive materials are transformed into frozen assets.

Focusing on gender inequality in the workplace, Sarah Taylor, an associate at a UK law firm, writes:

Unless organisations become more accommodating, the option to freeze eggs is simply postponing the challenges faced by many working mothers, as many of the women who freeze eggs will go on to have children eventually.

Worse still, older mothers are more likely to suffer from medical complications during pregnancy and labour, and will possibly hold more senior positions with even greater demands on their time. Postponing motherhood to later in life may not, therefore, make juggling the demands of career and motherhood any easier.

The other message that offering egg freezing promotes is that employers want women to focus on their careers during their natural child bearing years, but are happy for women in their forties and older to take time out to start a family, suggesting that the contribution of women over 40 is not as valuable.

Sabrina Parsons, CEO of Palo Alto Software, has an alternative suggestion for how Apple and Facebook employees could use that $20,000:

Imagine that instead they paid women $20,000 to have a full-time baby nurse for four to five months. Women could then continue their leadership track, have a baby, and feel completely supported by their organization. Or these companies could use that money and build real nurseries in their offices and staff them with licensed day-care workers, creating a great place for women mid-career to feel supported.

The not-so-subliminal message that a company sends a woman when egg freezing is a benefit, and the fact these companies don’t see that message, is an example of how far we have not come.

For more on workplace issues, read Samantha Allen at The Daily Beast and Claire Cain Miller’s reporting in The New York Times.

Plus, humor: The Reductress was ahead of the times in 2013 when it reported that Mattel was introducing Barbie’s Egg-Freezing Kit. 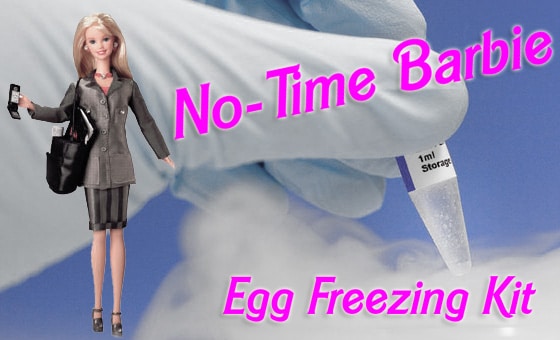