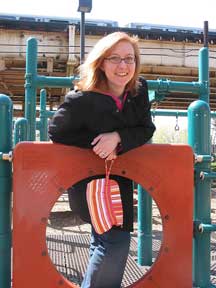 When I met Jenni 7 years ago I was in denial that I had a chronic illness. I didn’t like talking about my pain or my limits or even acknowledging that I had them because I didn’t want people to think I was weak. And when I sadly admitted to Jenni that I suffered from a chronic disease she smiled, gave me a high-five and said “Me, too, Babe!” And then I felt like I’d joined some cook-kids club where an illness is not the defining factor of me, but my attitude about myself is.

When she started talking about creating a website (www.chronicbabe.com) for women who were suffering from chronic illnesses but who wanted to focus on living life as a babe, instead of living life as a patient, I supported her fully since I knew what she’d done for my sense of self with one smile. I’ve seen her cry because she’s received touching emails from people who have let her know how she has affected them positively and given them the strength to: push their doctors for more information, convince a TSA official to not harass them for carrying a suitcase of drugs, bling out their inhaler and flaunt their asthma, and even just feel comfortable saying “I can’t do that today.”

She’s like a one-woman strength-based hurricane who has no qualms about squashing insensitivity, but because she’s a Southern gal she knows how to do it with smile and sass.

Pictured above is Jenni holding the handbag I made for her.