Following a successful campaign urging Facebook to apply its community standards toward pages and groups promoting rape and other violence against women, Women, Action & the Media (WAM!) has launched a new effort: calling on Clear Channel to lift a ban on radio ads promoting a Wichita, Kan., women’s health clinic that provides abortions. 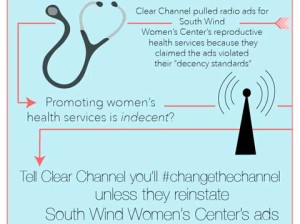 “At a time when access to reproductive health services, including but not limited to abortion, is under ever increasing attack by politicians and antichoice extremist groups alike, it’s ever more critical that women learn about the services that are still available to them,” said Jaclyn Friedman, executive director of WAM!.

The South Wind Women’s Center recently opened to provide a full range of sexual and reproductive health services, including well-woman exams, cancer screenings, contraception and pregnancy-options counseling. It is one of just just three facilities in all of Kansas that provide abortion care — and one of only three clinics in Wichita (which has a metropolitan population of 650,000) that provide subsidized birth control for low-income individuals.

The clinic is run by Julie Burkhart, a colleague of Dr. George Tiller, the abortion provider who was murdered in his church by an anti-abortion advocate in 2009. Burkhart founded Trust Women, which supports South Wind, to continue Tiller’s vision of entrusting women to make their own decisions for their health and their families. It does not perform late-term abortions as Tiller did.

In defending pulling the ads, Clear Channel claimed the ads are “divisive” and violate “decency standards.”

How “divisive” are the ads?

They never use the terms “abortion,” “pro-choice,” or “reproductive rights.” The first ad is completely innocuous and mentions the expertise and experience of the clinic’s family medicine and ob/gyn providers.

The second ad might be considered more provocative — but only to those who refuse to trust women with their own health decisions. While it never explicitly mentions Tiller’s murder, it reminds listeners that the clinic was “founded to re-establish access to full spectrum reproductive health care.”

Sadly, the most controversial message in these ads may be that the Center is “entrusting women with their own medical decision-making.”

The WAM! campaign also points out the irony in Clear Channel’s advertising: “Wichita’s Clear Channel stations happily play ads for a local sex shop. How is blocking access to information about where to get maternity care and cancer screenings less ‘divisive’ than running sex ads in a conservative Christian town?”

On Thursday, Wichita’s Clear Channel General Manager Rob Burton told a reporter: “As members of the Wichita community, KZSN has a responsibility to use our best judgment to ensure that advertising topics and content are as non-divisive as possible for our local audience.”

Tell Clear Channel that you’ll #changethechannel (hashtag for the campaign) unless it starts running South Wind’s ads. Here’s how you can get involved: