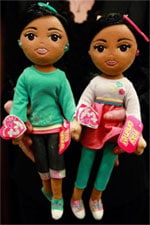 The first daughters have hit the market.

“They’re such adorable girls,” Ty Inc. spokeswoman Tania Lundeen said Wednesday of the Obama sisters — Sasha, 7, and Malia, 10. “How can we resist?”

But by the end of the week, Ty Inc. — the company that created Beanie Babies — announced the names were chosen because “they are beautiful names,” not because they resemble the first daughters.

Whatever. Sadly, these dolls lack agency in their own world. Malia doesn’t even have her own camera.

Instead, they “come with a password to an online ‘virtual world’ where real girls can decorate their dolls’ room, change their clothes or go shopping,” reports the Chicago Sun Times.

Michelle Obama is not impressed with the 12-inch pseduo-replicas.

“We believe it is inappropriate to use young private citizens for marketing purposes,” Obama’s press secretary, Katie McCormick Lelyveld, said in a statement today.

Also this week, Mattel announced it will launch its first complete line of African-American Barbie dolls.

Plus: There’s a new blog on girls as media producers. Mary Celeste Kearney writes that she created Girls Make Media “because I’ve been researching girls’ media production for over a decade now, and wanted to pull together in one place information about girl media producers, as well as programs for and research about girls’ media-making.”

Kearney — an associate professor of radio, television and film, and women and gender studies at the University of Texas at Austin — is looking to link to other programs (in and outside of the United States), so let her know if you doing something interesting in this field.