Finding “Common Ground” on Abortion – How’s That Working?:  “President Obama has accomplished a lot in his first 100 days in office, but one campaign promise he’s been unable to keep is a vow to make peace in one of the most polarizing issues in all of American politics: abortion,” reports NPR. 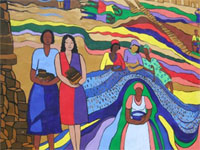 Lines in the Sand: Speaking of the elusive common ground, On the Issues magazine chose “lines in the sand” as the theme for its current issue.

An email to readers said the choice was “provoked by today’s too-prevalent sentiment to compromise principles in the interests of seeking ‘common ground’ and reconciliation with opposing views. In these articles we explore the feminist and progressive values that must be held tightly, the ‘lines in the sand’ that we refuse to erase.”

Publisher and Editor-in-Chief Merle Hoffman says reproductive freedom is “the front line, the bottom line and the everlasting line in the sand,” in her editorial “Higher Ground, Not Common Ground.”

Also look for essays by Gloria Feldt, Loretta Ross and many more writers and artists.

Economics, Race and Pollution: A study by researchers at the University of Massachusetts and the University of Southern California tracking toxic emissions from factories confirms what we already know: poor, minority communities are disproportionately affected by harmful pollution. The Milwaukee Journal Sentinel reports on the findings.

Public Attitudes Toward HIV/AIDS as a Health Issue: Kaiser Family Foundation has released its 2009 Survey of Americans on HIV/AIDS. In the United States, the sense of urgency about HIV/AIDS as a national health issue has decreased significantly. Residents’ concerns about the disease as a personal risk also has declined, even among some high-risk groups. This press release summarizes the findings. The study comes less than a year after the CDC  announced that there were 40 percent more new HIV infections each year than previously believed.

Egypt’s FGM Ban, One Year Later: In the year since Egypt outlawed female genital mutilation, the government hasn’t prosecuted a single case, Iman Azzi writes at Women’s eNews. Still, some activists say the law is a tool, among others, for gradually dismantling an ancient tradition.

Legalization – The “X” Factor: On May 1, thousands of activists took to the streets in favor of expanding immigrants rights. Suman Raghunathan, an immigration and public policy analyst, describes what immigrant women, particularly those who are undocumented, need: “A legalization program that’s broad, fair and workable for both immigrants and immigration officials.”

Raghunathan goes on to note that current federal immigration policy leaves it up to states to decide whether to provide free or low-cost health care to their undocumented residents. Several states, including New York, have expanded prenatal and neonatal care to undocumented women and children.

“Legal status,” she writes, “would mean that undocumented women are no longer left to the mercy of state legislatures and no longer denied appropriate nursing and doctoring.”

Plus: The L.A. Times reports on how some California counties are eliminating non-emergency health services for undocumented immigrants.

“We are mortgaging the future to scrape through the present,” said David Hayes-Bautista, professor of medicine and director of UCLA’s Center for the Study of Latino Health and Culture.

HRT and Heart Health: A study in the May issue of the journal Medical Care looks at whether the decreased use of HRT has affected the rate of cardiovascular health outcomes, according to this release. The number of heart attacks in menopausal women has decreased, though it’s not conclusive that there’s a link. Researchers did not find a difference in the rate of strokes.

Before 2002, physicians believed HRT reduced the risk of coronary heart disease by up to 50 percent in menopausal women. As a result, physicians prescribed it broadly to treat many of the symptoms of menopause, as well as to protect women against cardiovascular disease. However, a report by the Women’s Health Initiative in 2002 revealed that HRT actually had the opposite effect — it increased the risk of heart attack in these women.