Congress Considers Ban on BPA: Senate and House leaders on Friday said they would introduce bills establishing a federal ban on the chemical bisphenol A in all food and beverage containers. Meg Kissinger of the Milwaukee Journal Sentinel writes:

The move comes a day after Sunoco, the gas and chemical company, sent word to investors that it was now refusing to sell bisphenol A, commonly known as BPA, to companies for use in food and water containers for children younger than 3. Sunoco told investors it could not be certain of the compound’s safety. Last week, six baby bottle manufacturers, including Playtex and Gerber, announced that they would stop using BPA.

The bills would immediately outlaw the sale of all food and drink containers made with BPA. Anything on store shelves would have to be removed. It would suspend the manufacture of food packaged in containers that contain the chemical, but items already made could be sold.

A new study, “Incarcerated Women and Abortion Provision: A Survey of Correctional Health Providers,” found that only 68 percent of respondents indicated that women in their facilities can obtain “elective” abortions. And a recent investigative piece in the Texas Observer reported, “For pregnant women in immigration detention facilities, it is virtually impossible to obtain an abortion.”

Racial Disparities and Breast Cancer: An article in the International Journal of Cancer points to high blood pressure as a cause for some of the disproportionately higher mortality rates among African American women with breast cancer compared with white women, reports Reuters. Hypertension explained 30.3 percent of racial disparity in “all-cause survival,’ as well as 20 percent of the racial disparity in breast cancer-specific survival. The study abstract is available online.

Dannon Goes rBGH-Free: As we reported earlier, General Mills, which makes Yoplait, agreed to stop using milk treated with artificial growth hormones in its yogurt. Now Dannon has followed suit. The decision makes economic sense: More than 200 hospitals around the country recently pledged to serve rBGH-free products to their patients, staff and visitors.

Writing about the move by both companies, Patty Fisher of the Mercury News notes that Yoplait never acknowledged any concern over rBGH and women’s health, despite promoting breast cancer awareness through yogurt sales. “The ‘rBGH-free’ label will be on the carton because it will sell yogurt. I guess that’s why the pink ribbon is there, too.”

A list of all recent updates is available here. Statehealthfacts.org is part of the Henry J. Kaiser Family Foundation. 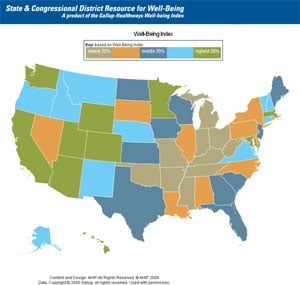 Plus: Utah, Hawaii and Wyoming top the nation in well-being in an analysis of more than 350,000 interviews conducted in 2008. Southern states West Virginia, Kentucky and Mississippi have the lowest well-being ratings, according to a new Gallup survey.

The Well-Being Index score for the nation and for each state is an average of six sub-indexes: life evaluation, healthy behaviors, work environment, physical health, emotional health and access to basic necessities.

Reproductive Health in Africa: North Carolina Public Radio reports on the high maternal mortality rate in Zambia, where the number of women who die during pregnancy or childbirth is 60 to 70 times higher than it is in the United States. As part of the series North Carolina Voices, Global Health Connections, Rose Hoban traveled to the Zambian capitol of Lusaka to spend time with health care workers who work with Ipas, a global nonprofit organization based in Chapel Hill that helps women get access to the full range of reproductive services.

“At a news conference, the sheriff said his office has made hundreds of prostitution arrests, many of them based on ads found on Craigslist,” reports the Chicago Tribune. “But the sex-for-sale ads still proliferate on the site five months after Craigslist promised new safeguards to settle a nationwide lawsuit by the top state prosecutors from Illinois and 39 other states.”

Where Are the Female Coaches in Youth Sports?: University of Southern California sociologist Michael Messner has written a new book about the persistent gender divisions in youth sports, especially at the coaching level. He expands on his findings at Moms Team and shares tips from women coaches.