This post was written in connection with the annual Blog for Choice Day, Friday, Jan. 22. Apologies for the delay! 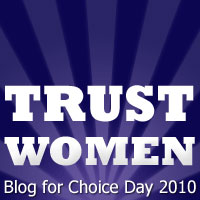 NARAL is dedicating Blog for Choice 2010 to the legacy of Dr. George Tiller, who was murdered last May in his church foyer as he welcomed parishioners attending morning mass. Tiller provided abortions to women who often had no place else to turn and whose health, or the health of the fetus, was threatened.

Tiller was the focus of anti-abortion groups for years; he had survived previous attempts on his life, including being shot in 1993. Committed to his work, he sometimes wore a button that said, simply, “Trust Women.”

This year’s blog question, “What does ‘Trust Women’ mean to you?” can be answered with an equally simple response: Everything.

If the world learned to trust women, women would be welcomed into power structures, affecting every legal, political, social and economic arena.

If the world learned to trust women, women — and especially men — would no longer fear living outside of stereotypes and would be able fulfill their potential.

Trust Women isn’t just a mantra of tolerance or respect. It’s a phrase that changes the playing field, in every way imaginable.

It’s the right phrase to advocate for women making their own reproductive health choices, and it’s a much broader statement about our future.

– Utah and D.C. enacted laws to ensure that sexual-assault survivors receive information about and access to emergency contraception in emergency rooms.

– Virginia enacted a law that establishes “Choose Life” license plates. A portion of the proceeds from these plates funds anti-choice organizations known as “crisis pregnancy centers” that target women considering abortion and often mislead, coerce and intimidate them.

– Arizona enacted a far-reaching law that includes a litany of anti-choice provisions that, among other things, subject women to state-mandated lectures and waiting periods that delay access to abortion care. The law also allows certain individuals or entities to refuse to provide abortion services and to refuse to provide or dispense contraceptives.

This episode includes a discussion with Carol Joffe, author of “Dispatches from the Abortion Wars,” Lynn Paltrow, executive director of National Advocates for Pregnant Women, and Silvia Henriquez, executive director of the National Latina Institute for Reproductive Health. Learn about the current state of reproductive health and rights and how anti-abortion efforts — whether through legislation or terrorism — hurt all pregnant women.