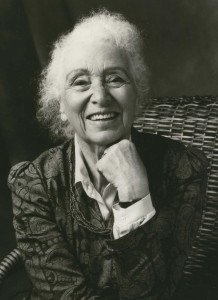 Elisabeth Bing, co-founder of the Lamaze Childbirth Preparation Method in the USA almost 50 years ago, made a major contribution in achieving Family Centered Maternity and changed birth in America for the better  for all time.

Birth in the 19th and 20th centuries went from the home to the hospital and was characterized by routine intervention with women being heavily drugged, restrained and isolated. By 1960, with co-founder Marjorie Karmel, Elisabeth Bing developed a grassroots movement with the support of only a few obstetricians, and showed that medical management was not necessarily safer.

Training couples with the Lamaze Method, which encompassed support for laboring women.  She would say, “Physicians must learn to keep their hands in their pockets unless there are specific medical indications.”

Her contribution to public health, pregnant women, safety of the newborn, their partners and the family is monumental.