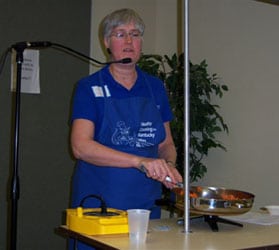 I nominate Sheila Fawbush as my “women’s health hero” because of her work for the improved health of women in rural Shelby County, Kentucky.

As an agent for the University of Kentucky’s Extension Services, Sheila works in daily direct contact with women—and men and children—offering classes and workshops on a variety of topics focusing primarily on nutrition and fitness.

Her services are particularly valuable because they are available at no or low cost and are thus accessible to low-income individuals. She has also made a conscious effort to reach out to Shelby County’s large and growing (im)migrant population, offering mini-sessions to ESL groups on, for instance, making healthy and cheap choices when grocery shopping.

She also makes available, when possible, a range of trial products and services, ranging from milled flaxseed to cooking utensils to one-day passes to the local fitness facility. Because she promotes the health of women and families of Shelby County, and because she does so particularly with regard to often-underserved communities, including lower-income individuals and racial, ethnic, and language minority groups, Sheila Fawbush is a “home-grown” woman’s health hero.