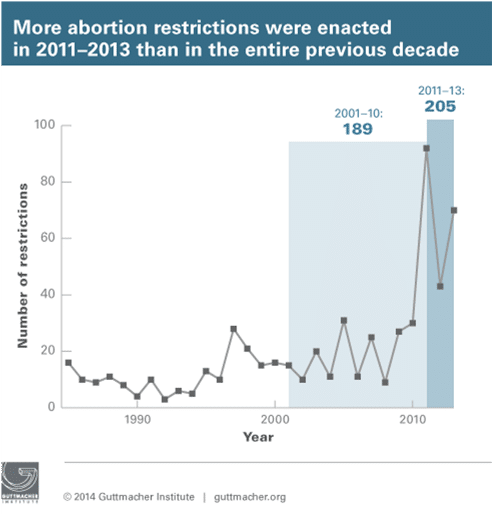 As we have seen, however, legality does not equal access. Many states have chipped away at Roe v. Wade; in 2012 alone, 22 states enacted 70 new abortion restrictions, making abortion much more difficult to obtain

There have been numerous stories lately on state abortion battles and where the push will be in 2014 to further reduce abortion access, as (mostly male) politicians, seeking to boost their midterm election profiles, will try to enact more barriers.

Abortion rights activists are going on the offensive. So should you.

For this anniversary of Roe, make a plan to support reproductive choice in 2014. Connect with supporters in your area.

Contact your senators and representatives and let them know you support the Women’s Health Protection Act (S 1696/HR 3471), which would prohibit many restrictions that intrude on a woman’s decision and make it more difficult for physicians to provide abortion services.

Learn about abortion restrictions in your state, and check to see if bills proposing new restrictions have been introduced.

We need to talk more openly about abortion as a health issue for women, and we need to work together to ensure it remains a legal option in the years to come.