This Week’s Super Fun Health Reform Graphic: This Washington Post graphic looks at the potential upsides and downsides of the various proposals under consideration and attempts to answer bottom-line questions, such as:  Will you get the care you need? Can you avoid financial ruin? 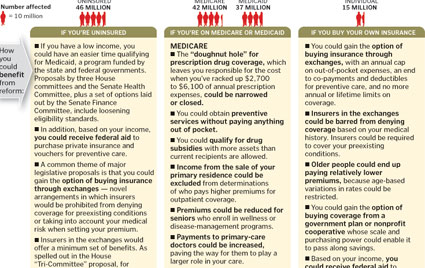 Got Time?: It’s unlikely Congress will agree on healthcare legislation before the August recess, Democrats and Republicans said on Sunday morning talk shows — especially as attention turns this week to the confirmation hearing for Judge Sonia Sotomayor (more on that later).

CNN’s “Situation Room” Sunday morning was an exercise in political politeness. Health and Human Services Secretary Kathleen Sebelius spoke optimistically about a bipartisan approach and coming to some agreement on how reform will be funded: “I think everything is on the table and discussions are underway.”

But when it came time to hear from senators Debbie Stabenow (D-Mich.); Judd Gregg (R-N.H.); Lamar Alexander (R-Tenn.); and Kent Conrad, D-N.D.), it was clear that Democrats and Republicans are dining at different tables, and some Democrats are sitting at opposite ends. (Scroll down for debate).

Stabenow said taxing employee’s health benefits is “off the table”; Alexander says it’s on. Stabenow wants a public option; Conrad is backing his own “compromise” plan of membership-controlled co-ops that theoretically would provide competition for insurance companies.

*Side note: For a smart assessment of why co-ops won’t work — but what they do add to the debate — read “The Trouble with Conrad’s Compromise” by Jacob Hacker, the co-director of the Center for Health, Economic and Family Security at U.C. Berkeley and a fellow at the New America Foundation.

Back to the question of the public insurance option, which Republicans are generally against — Gregg called it a “slippery slope” to a single-payer system (despite less-than-zero encouragement from the administration for single-payer) and warned of  “putting a bureaucrat between you and your doctor.”

Stabenow did advocates of the public option proud with her response:

Well, my first choice and very strong choice is a public option. And I have to say, Wolf, that what my friends are saying, Senator Gregg and Senator Alexander really are scare tactics that have been put forward by folks that don’t want to change the system because they make a lot of money off the current system right now.

The reality for families today is if there’s an insurance company bureaucrat between you and your doctor telling your doctor what they’re allowed to do because of what they’ll pay for, telling you what they’ll pay for, putting you through all kinds of bureaucracy to try to figure out if you can get care, assuming you’re not dropped if you get sick or can’t get insurance if you have a pre-existing condition.

So what we’re talking about is putting somebody on your side, being able to make sure that the insurance company, the for profit insurance company won’t provide you with a low cost insurance policy for your family that you have another choice.

For more on the Democratic split, The Washington Post reports on the rebellion by the fiscally conservative Blue Dog Democrats and the meeting on Friday between the coalition and House leaders. The Blue Dogs said the public insurance plan would “seriously weaken the financial stability of our local hospitals and doctors.”

Jonathan Cohn at The New Republic writes that “preliminary estimates from the Congressional Budget Office suggest that a strong public option — the kind that the House of Representatives is putting in its reform bill — should net somewhere in the neighborhood of $150 billion in savings over ten years.”

“The sources cautioned that these were only the preliminary estimates, based on previous discussions — that CBO had not yet issued final scoring on language in the actual bill,” adds Cohn. “But the sources felt the final estimate would likely be close.”

Ezra Klein adds an important caveat — “the final score will go up or down depending on the interactions between the public option and other elements of the final bill.”

Conservatives saying that a policy that will save $15 billion a year will end American health care — or, as Rep. Paul Broun would have it, “kill people” — have jumped off the deep end. Liberals who have invested all their hopes in the public plan might also be a bit disappointed. The CBO score seems to imply the likeliest of all possible outcomes: The addition of a public insurance option is a good, but modest, change to the health-care system.

Questions for Howard Dean: In a Q&A in The New York Times Magazine, former Vermont governor and presidential candidate Howard Dean sums up his role on healthcare: “My role is to try to get the Democratic Party to do the right thing. I believe that if we don’t pass the health care plan with the public option, it won’t be health care reform, and we’ll lose a tremendous number of seats in 2010.”

AlterNet did a more substantive interview with Dean about the politics involved in achieving real reform, per Dean’s new book, “Howard Dean’s Prescription for Real Health Care Reform,” and the folly of passing a bipartisan bill that doesn’t change a thing.

Here’s Dean response to the question: “What do you think about the argument that if we in the progressive movement had started basically pushing [Michigan Rep. John] Conyers’ HR 676 [single-payer bill], we might not have a better chance of meeting in the middle with a hybrid plan such as the one that you’ve laid out.”

If you give up the public option, then this is not worth doing. You can do some insurance reform, but you shouldn’t put any money into it. Just force the insurance companies to behave differently by the law, but don’t put a trillion dollars into the system we already have. It’s already too expensive.