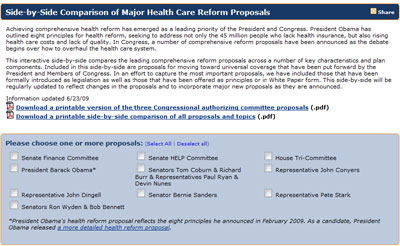 We also direct your attention to the Center for Policy Analysis, a resource for information on progressive health reform. The real treasure is its EQUAL Health listserv (Equitable, Quality, Universal, Affordable Health). Sign up and take part in conversations about women’s health, national health reform and how to advocate for policies that would benefit us all.

The Center also provides guidance on reaching out to members of Congress: This chart shows which caucus committee members belong to — which is a good indication of which plan they’re supporting. Use it to contact your representative, because times are tough …

Perilous Roadblocks: “Four divisive issues could dash President Barack Obama’s hopes of overhauling health care: cost, creating a government-run plan, taxing workers’ benefits and penalizing employers that don’t offer coverage,” writes the AP’s Ricardo Alonso-Zaldivar. “Even if lawmakers come back from their July Fourth recess charged up to tackle health care, these issues are going to keep simmering for months. A big blowup over any single one could threaten the entire legislation.”

We Got Nothing: Republicans are doing their part to wage fear over a government-supported health insurance program (the public option), while also acknowledging that none of the existing Democratic plans will gather bipartisan support.

“Asked how many Senate Republicans could sign on to developing Democratic plans, Senator Richard M. Burr of North Carolina, author of a Republican alternative, said: ‘I think right now, none. Zero,'” reports The New York Times, which later on notes, “Republicans, however, have yet to put forward their own concrete plans that would broadly expand health coverage while also holding down costs.”

Over at Talking Points Memo, Zachary Roth points out that arguments against the public option on the grounds that it will destroy free-market competition miss the mark:

But the notion that most American consumers enjoy anything like a competitive marketplace for health care is flatly false. And a study issued last month by a pro-reform group makes that strikingly clear.

The report, released by Health Care for America Now (HCAN), uses data compiled by the American Medical Association to show that 94 percent of the country’s insurance markets are defined as “highly concentrated,” according to Justice Department guidelines. Predictably, that’s led to skyrocketing costs for patients, and monster profits for the big health insurers.

Speaking on ABC’s “This Week,” David Axelrod declined to repeat Obama’s “firm pledge” during the campaign that families making under $250,000 would not see “any form of tax increase, not your income tax, not your payroll tax, not your capital gains taxes, not any of your taxes.”

Instead, Axelrod said the president has no interest in “drawing lines in the sand” on the issue of how to pay for the costly health reform plan making its way through Congress.

Nor is he holding all that tight to the public option. Again with the sand, this time on NBC’s “Meet the Press”:

Axelrod said he is “confident that we’re going to get a health care reform bill”: “I think a public choice will be part of it. I think the public wants to have that option, and wants to see that kind of competition, and I think we will have that.”

Moderator David Gregory followed up: “When it comes to a public plan, though, no ultimatums from the president?”

“Well, the president believes strongly in a public choice, and he has made that very, very clear,” Axelrod replied. “He has made that clear privately. He has made that clear publicly, and we’re going to continue to do so. … Look, we have gotten a long way down the road by not drawing bright lines in the sand — other than on the major points, which is that we can’t add to the deficit with this health care reform, so it has to be paid for, it has to reduce costs, and we want to make sure that all Americans have quality, affordable health care.

Single-Payer Advocates Not Only Ones Feeling Left Out: Emily Pierce at Roll Call writes:

Sens. Ron Wyden (D-Ore.) and Bob Bennett (R-Utah) have 11 other co-sponsors already — six Democrats, one Independent and four Republicans — on their bill, which is aimed at creating more competition in the insurance market and lowering costs by eliminating employer-provided health care coverage. Instead, consumers would get pay raises equal to their current health benefits and buy insurance on the open market.

Bennett said he believes the bill has lacked traction with Senate leaders because neither he nor Wyden is in a position to place it at the center of the debate.

Insured but Unprotected: Just a reminder of how poorly our current system protects those with insurance: The New York Times reports that “an estimated three-quarters of people who are pushed into personal bankruptcy by medical problems actually had insurance when they got sick or were injured,” and patient advocates are calling for federal rules “to correct the current state-by-state regulatory patchwork that allows some insurance companies to sell relatively worthless policies.”

“Underinsurance is the great hidden risk of the American health care system,” said Elizabeth Warren, a Harvard law professor who has analyzed medical bankruptcies. “People do not realize they are one diagnosis away from financial collapse.”

Plus: Elizabeth Warren earlier this year appeared on PBS’s NOW with Maria Hinojosa. Read or listen to the interview.

Health Reform That Benefits Women: From Women’s eNews: As Congress debates at least 10 health care proposals, prominent women’s advocates say work and wage issues make the single-payer model the best deal for women — but it’s not picking up much legislative support . Molly M. Ginty talked to a number of women’s health advocates, including our own Judy Norsigian. OBOS has formally endorsed the single-payer model. Amnesty International also urged action on single-payer this week.

Though single-payer legislation is not being considered in the Senate, the House is weighing it in the form of the U.S. National Health Care Act (HR 676), which was introduced January 26 by Michigan Rep. John Conyers, Jr.

Prominent advocates for women’s health say the lagging single-payer model would serve women best. The National Women’s Health Network, for instance, has endorsed this model since 1978.

“Most of the leading health care proposals on the table would tie insurance coverage to employment in a way that is problematic for women,” said Judy Norsigian, executive director of the Boston-based Our Bodies, Ourselves.

Single-Payer Testimony: Single-payer advocates Quentin Young and Steffie Woolhandler, both with Physicians for a National Health Program, last week testified before the House Ways and Means and the Energy and Commerce committees, respectively.

I wish to make two points to the Members of this Committee. The first is that the best health policy science, literature, and experience indicate that the Tri-Committee proposal will fail miserably in its purported goal of providing comprehensive, sustainable health coverage to all Americans. And it will fail whether or not it includes a so-called “public option” health plan.

The second point I wish to make is that single-payer national health insurance is not just the only path to universal coverage, it is the most politically feasible path to health care for all, because it pays for itself, requiring no new sources of revenue.

Wendell Potter, a former health insurance executive who had a change of heart, also testified. Potter is now senior fellow on health care for the Center for Media and Democracy in Madison.

Are you on Twitter? NWLC is running a Twitter stream on healthcare reform. Finish the sentence, “Women need health care reform this year because … ” and add the hashtag #healthcare09 to your tweet.

Stay tuned for Political Diagnosis II, the rest of the week in Washington …