This Week’s Super Fun Health Reform Graphic: The award goes to The New York Times for the multi-tab Key Challenges in the Healthcare Debate. Below is the view from the section on “Getting Through Congress.” 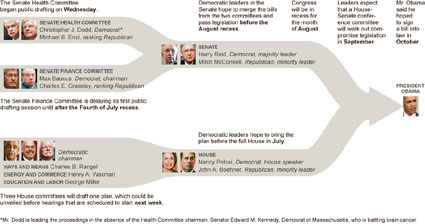 Cuts to Medicare Drug Costs: The AARP has endorsed an offer by drug manufacturers to discount the price of some Medicare prescriptions by $80 billion over the next decade. The announcement was made today at the White House; a transcript of President Obama’s remarks is available here.

“The unusual offer by the Pharmaceutical Research and Manufacturers of America (PhRMA) is part of its effort to convince skeptical lawmakers that it backs major health-care legislation,” writes Ceci Connolly of the Washington Post. “Though the agreement represents a fraction of the total cost of health-care reform, it has been managed for maximum public relations exposure.”

Connolly explains how the deal would work:

When the Medicare prescription drug benefit approved by Congress went into effect in 2006, it left a coverage gap that charges seniors the full cost of medications once a patient has received $2,700 worth of drugs, until the total reaches about $6,100. At that point, “catastrophic” coverage kicks in and covers nearly all drug expenses.

“The existence of this gap in coverage has been a continuing injustice that has placed a great burden on many seniors,” Obama said over the weekend.

Under the proposal, seniors who fall into the coverage gap known as the “doughnut hole,” would pay half price for all brand-name medicines. The discounts could save 3.5 million retirees up to $1,700 a year, according to AARP. In addition, the full price of the drug would count toward a person’s out-of-pocket total, thus maximizing the insurance benefit.

Connolly also wrote a good Sunday Outlook piece on Obama’s strategic approach to health reform, and this morning she participated in an online discussion about the article.

Kaiser Health News’ Mary Agnes Carey discusses the highlights of the bill, which includes an individual mandate for coverage, with some exclusions, and an employer mandate – called “pay or play.” As for how it will be paid for:

They stressed that everything is on the table. They have some ideas. They want major Medicare and Medicaid system reform such as ‘accountable care’ organizations that really try to coordinate medical care to make sure it’s the best possible care for the patient and reducing hospital re-admissions.

But of course, they’re always talking about taxes as well. And these are some of the ideas that will be discussed in the coming weeks: a tax on the benefits that an employer provides, a payroll tax, a tax on sugary drinks, taxes on alcohol, value added taxes (also called VAT) on some goods and services.

Igor Volsky at The Wonk Room notes that the Tri-Committee proposal “seems to contain a fairly robust public insurance option.” The Times published a poll Sunday showing overwhelming support for a government-funded public option that would compete with private insurance plans.

“On the whole,” adds Volsky, “the bill’s affordability measures are impressive.” His post includes a comparison of the HELP bill, the Senate Finance Committee draft and the Tri-Committee bill.

Pus: The Senate debate kicked off Wednesday, and it was a rocky start. Jeffrey Young at The Hill has more.

Here are six senators to watch for their involvement in crafting a bipartisan health-care bill, via The Fix. Three former Senate majority leaders — Democrat Tom Daschle, and Republicans Bob Dole and Howard Baker — have reemerged with their own plan. They must be missing the excitement.

Dan Balz writes that Obama is soon going to have to “make clear what he’ll accept and what he won’t” when it comes to “cost and coverage, revenue and savings, a public option or not, and the cost vs. the desirability of bipartisan agreement.”

Cost and coverage suddenly became a more central issue after the Congressional Budget Office issued new estimates last week. The goal of reform advocates long has been a plan that moves the country to universal coverage. Earlier assumptions put the price tag in the neighborhood of $1 trillion over 10 years. The CBO shattered those assumptions, though their numbers were based on incomplete plans.

A preliminary estimate of the Senate Finance Committee’s draft bill put the price tag of universal coverage at $1.6 trillion over 10 years. That was considerably more than anyone anticipated and forced the committee to delay work on the bill. The cost of the incomplete plan drafted by the Senate Health, Education, Labor and Pensions Committee was pegged at about $1 trillion over 10 years, but the CBO said that would still leave 30 million (rather than the current 46 million) people without coverage.

Talking Points: Media Matters notes that during a Sunday morning interview with members of the Obama administration’s health care team, Good Morning America’s Diane Sawyer didn’t include any questions that reflected the concerns or positions of progressives.

What I think is really interesting is that although Sen. [Max] Baucus says that single payer is off the table, at the minimum, we’re the elephant under the table. Everybody is referring to us.

So, you have someone like [Health and Human Services Secretary Kathleen] Sebelius now saying we’ll create a public option that will not go to single payer. You have Republicans saying that the thing they fear is single payer; you have a whole variety of discussion that’s going on that keeps referring to this thing called single payer. Probably one of the real problems is there’s not enough of a definition for the public to make an assessment about what that really is.

In other political news …

Did You Hear the One About the Republican Senator Who Wouldn’t Condemn Clinic Violence?: Sadly, it’s true. Jodi Jacobson reports at RH Reality Check that an anonymous Republican senator used his (it’s presumed, with good reason, that the Republican in question is male) power “to put a ‘hold’ on a Senate Resolution originally introduced by U.S. Senators Jeanne Shaheen (D-NH), Barbara Boxer (D-CA), and Amy Klobuchar (D-MN) condemning violence against women’s health providers, thereby blocking any vote on the resolution.”

Bush Bioethics Panel No More: The New York Times reports: “Members of the President’s Council on Bioethics were told by the White House last week that their services were no longer needed and were asked to cancel a planned meeting, a council staff member said Wednesday.”

Reid Cherlin, a White House press officer, told the NYT the panel was designed to a “a philosophically leaning advisory group” that was more about discussion than consensus-building.  that favored discussion over developing a shared consensus. Obama will appoint a new panel charged with offering “practical policy options,” said Cherlin.

The FDA’s Full Plate: FDA Commissioner Margaret Hamburg told USA TOday there’s no truth to the rumors that the FDA will split in two, with one half overseeing food safety and tobacco and the other responsible for oversight of medical products.

Drug safety, tobacco regulation and direct-to-consumer advertising top Hamburg’s agenda. On the subject of advertising, Hamburg said, “There certainly have been concerns about the quality and authenticity of some of the messages … We have a dedicated staff working on the issue.”