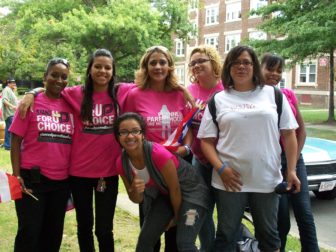 The communities of Holyoke and Springfield experience the highest teen birth rates in the state, at 95.4 and 84.3 per 1,000, respectively, compared to 22 per 1,000 for the state as a whole.

As studies clearly show, teen pregnancy and birth rates are much related to high school drop out rates. Holyoke and Springfield are no exceptions with the two highest drop out rates for Latino teens in the state (34.9 and 33.3 per 1,000, respectively, compared to 22.8 in MA overall).

In Latin American countries and culture, health care is often provided in a more personal and informal way than in the United States. Promotoras offer customized health information from volunteers with first-hand knowledge of the communities they serve and the experiences they have that effect their health care knowledge and access.

Through a partnership with the Puerto Rican Cultural Center and Planned Parenthood League of Massachusetts, the Promotoras, or community health workers, in Springfield, Mass., have been providing sexual health education to their community in group and individual settings to raise awareness and increase access to sexual health information and services.

In just four short months, and with strong leadership and dedicated guidance from Iris Coralí, the Latino community health education coordinator from Planned Parenthood, the promotoras have connected with over 1,300 individuals in their community through charlas, health and community fairs, and family and friends. Each person they connect with receives accurate information about sexual health from someone they can identify with, along with answers to questions they may have and referrals to health services in their community. The promotoras include:

* Maribel Cabrera is 32 years old and was born and raised in Rio Piedras, Puerto Rico. She recently moved to the United States, to Springfield, and is studying English at the Massachusetts Career Development Institute. For Maribel, being a promotora means being a leader in her community and a confident advisor. As promotoras, she believes she can access and attain knowledge, information and resources to advise the Latino community. Maribel has two sons who are her main reason to keep moving forward.

* Paola Figueroa is 25 years old and was born and raised in Rio Piedras, Puerto Rico. She came to the United States to achieve some of her greatest drams, which included seeing snow and having a better life – both of which she has achieved. Paola is studying English at the Massachusetts Career Development Institute to be able to have a better job in the future. She loves being a promotora de salud sexual because she believes it is a very important topic for our children and their future and to be able to give advice to the community. As a promotora she has the skills to give correct information and be knowledgeable about the health services.  For Paola, being a promotora signifies the confidence in her community. She has a very intelligent 5-year-old daughter, Lenalisse, and a wonderful supportive husband.

* Jessica Rivera was born and raised in Arecibo, Puerto Rico and is 29 years old. She decided to come to the United States to find a better job and to give her sons a better future. Jessica has two sons who, along with her family, are her biggest love; they are 8 and 9 years old. She has a bachelors degree in Elementary English from Puerto Rico and is currently studying English at the Massachusetts Career Development Institute. Jessica likes to help other people, and to talk a lot. Being a promotora means she is an example for the community to give correctly information about sexual health and sexuality to help the community. Through her knowledge as a promotora she can help other people in need be able to have a healthy future.

* Sandy Soto was born in 1969 and raised in Puerto Plata, Dominican Republic. She completed her law degree from the Universidad Technologica de Santo Domingo and moved to the United States in 2006 after visiting a few times before. Sandy has always liked to work with people to help them and she believes that by being a promotora she can do that. Being a promotora means she can advise her community about how to protect their physical and mental health and how they can help their families. Sandy has three sons and one grandson.

So far, they have received very positive feedback, and it is clear many community members are appreciative of the information they are receiving.

A woman staying at a homeless shelter in West Springfield, where she lives with her two children, took a bus to the Center’s recent Three Kings Day Celebration. The woman was 35 years old and moved to Massachusetts from Puerto Rico six months ago after divorcing her husband and escaping domestic violence. As part of the process for signing up for toys at the Center, the woman attended a charla and filled out a subsequent evaluation. On the evaluation form, the woman mentioned having little knowledge of birth control options and STI prevention. She also listed that she had never had an annual gynecological exam.

After listening to the charla, the woman was very happy to have received such helpful information and commented that she felt many in the community could benefit from it. She also wrote that she would like to become a Promotora herself, and provided her contact information.