Last month, a marathon in Tel Aviv drew runners raising money for a number of different causes — including an adaptation of “Our Bodies, Ourselves.”

Sophie Walsh, a clinical psychologist who moved from London to Tel Aviv in 1994, ran in support of Women and Their Bodies: The Women’s Association for Health Action and Responsibility. Founded in Israel in 2005, Women and Their Bodies (WTB) is an Israeli-Palestinian initiative that is adapting “Our Bodies, Ourselves” into Hebrew and Arabic.

“This version will be up-to-date for this decade, making it available to all women in Israel regardless of their native tongue,” Walsh told the Haaretz newspaper.

The OBOS global translation/adaptation program was recently featured in On the Issues magazine. The story explains how each international project is specific to the community’s health needs and social and political conditions.

We haven’t discussed the Israeli-Palestinian project in detail here before, so here’s some news about the effort.

WTB has more than 40 Hebrew and Arabic chapters in progress, and the goal is to publish the Hebrew edition in 2010. The Arabic edition will appear first online and as booklets — two of which will be published by the end of the year — with a book publication date to be announced soon. 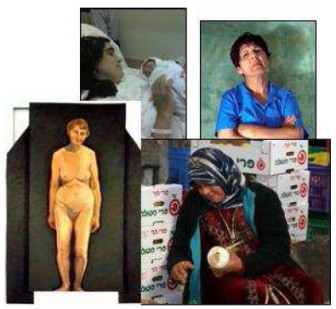 The organization is working with Jewish and Arab groups to localize the material and has collaborated with numerous women’s and human rights organizations. WTB has also recruited teams of volunteers, Hebrew and/or Arabic-speaking, between the ages of 21 and 65, to conduct interviews for the personal narratives present in every chapter.

A graphics committee is charged with making sure that the book’s images are representative of women’s bodies in the Middle East and include women of varied religious and ethnic backgrounds. According to WTB’s 2008 annual report, dozens of women have already volunteered images, including those shown here.

In addition to the Arabic and Hebrew publications, WTB is creating an online action and resource center, with links to women’s organizations and blogs providing updates on health legislation.

The organization also runs community outreach workshops on women’s health rights and sexuality. Facilitator Suzaan Abu-Waasel led a workshop on women’s body image and empowerment for the older women’s club at the Arab Jewish Community Center in Jaffa. Here’s what she said at the end of the session:

Asking the women aged 45-60 to put their social commitments aside and focus on their own bodies and wellbeing, was an extremely challenging task. Much patience is needed to raise taboo topics.

Many of the participants focused on good parenting, or their relationships with their in-laws; the concept of taking care of ones’ self was rather alien at first … I am thrilled to tell you that their group coordinator now reports an overflow of critical discussions.

It costs approximately $5,000 to produce each chapter. If you and a group of friends or an organization want to sponsor a chapter in the Hebrew or Arabic adaptation, you can write a check to “Women and Their Bodies,” and mail it to 34 Kfar Etzion St. Jerusalem, Israel 93392.

Smaller sums go directly to support sections of chapters, such as the narrative collection, or the linguistic editing in the chapter of your choice.

Let us know if you want additional information about this or other OBOS adaptations. Projects are currently also underway in China, India, Nepal, Nigeria, Russia, Tanzania and Turkey.