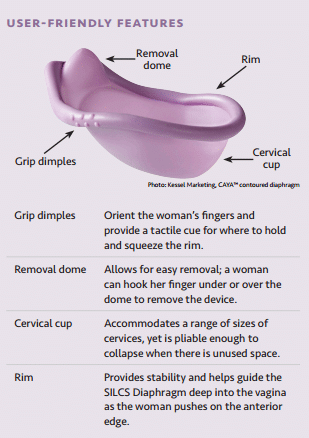 Diaphragms are one of the least popular forms of contraception used by women, according to CDC data, but a new type of diaphragm aims to increase its appeal.

Diaphragms are a barrier method of contraception that block sperm from entering the cervix. They are typically used with added spermicide for extra protection against pregnancy.

Some women prefer using a diaphragm because their bodies don’t tolerate hormonal contraception, or because they want a birth control option that can be used only when needed. Diaphragms can also be used as a back-up to condoms; they do not prevent sexually transmitted infections (STIs) on their own.

One drawback to diaphragms is the need to be “sized” by a healthcare provider for the right fit, and sometimes resizing is needed after giving birth or gaining or losing weight. Some diaphragms are made of latex, posing a problem for those with latex allergies or sensitivities.

A new diaphragm recently approved for use in Europe addresses these problems. The SILCS Diaphragm is designed to be one-size-fits-most, and it does not require resizing. It’s also made of silicone, which is expected to be more durable than latex and is less likely to cause skin reactions.

The SILCS diaphragm is the product of a collaboration between between PATH (a Seattle-based global health nonprofit), CONRAD (a reproductive health product development organization operated through Eastern Virginia Medical School), the U.S. Agency for International Development (USAID), and other partners.

PATH describes a user-centered design process for the new device, pictured above:

Over ten years, PATH and its partners led a user-centered design process involving input from women, their partners, and health care providers from five countries. This feedback ensured that comfort, ease of handling, and acceptability were built into the device from the beginning.

The diaphragm will initially be available in six European countries, marketed as the Caya contoured diaphragm. It is expected that the SILCS group will seek approval for marketing in the United States, as well as in low-resource settings around the globe. The ability to provide a diaphragm without sizing by a healthcare provider is expected to make this form of contraception more readily accessible to women worldwide.

This Bedsider feature also take a look at the SILCS diaphragm.